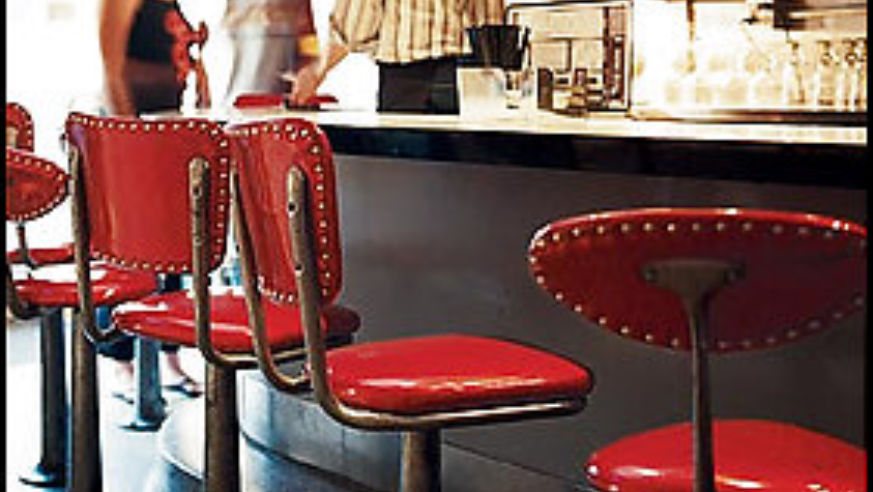 Creative chefs across the country are reinterpreting the greasy spoon. Say good-bye to grits and hello to quinoa.

Back in 2000, restaurant vet Don Levy was planning to open a gourmet hot dog stand in an old gas station when he heard about a 1947 diner near his home in the Boston suburbs. He sweet-talked the owners into selling, then spent two months refurbishing the 86-seat Deluxe Town Diner. "We wanted to bring the building back to its roots, to the '40s, which was a plain period of time," Levy says, "and not the '50s with its kitschy elements." Wood paneling was stripped from the teal-tiled walls, the fuchsia booths were painted black, a curved aluminum ceiling was installed, and the original marble countertop was brought up from the basement. Meat loaf ($7) and mac and cheese ($6) share space on the menu with cod cake Florentine ($9), tofu stir-fry with quinoa ($9), and a Kobe beef burger ($11). But Levy's most successful venture is the weekend brunch, an all-day affair that has folks lining up, rain or shine, for 30 minutes. The flapjacks, which come in eight varieties and are eight inches wide, have even been featured on the Food Network. 627 Mt. Auburn St., 617/926-8400, deluxetowndiner.com. --Kristine Brabson

The more than 1,000 bulbs on the Town Talk Diner marquee are once again lighting a stretch of the Longfellow neighborhood. The 15-seat counter is as busy as it was back in the '40s, when it was shoulder-to-shoulder with factory workers. But Town Talk has expanded, adding 80 seats, and now hipsters and old-school patrons snack on cheese curds fried in a caper-scallion batter ($6) or "frickles"--tempura pickle rounds with a mustard-dill dipping sauce ($5). A trio of owners is responsible for this latest incarnation: chef David Vlach, who trained at Napa Valley's French Laundry, and managing partners Tim Niver (formerly of Minneapolis's Aquavit) and Aaron Johnson (of Le Méridien hotel downtown). Little restoration was done--the tin ceilings, steel walls, and swivel stools were too classic to remove. "It's a diner, tweaked up," says Niver. "At one table, someone might order the halibut, another a hot dog. And hey, we'll still serve you from our left hand and clear with our right." 2707 1/2 E. Lake St., 612/722-1312, towntalkdiner.com. --Megan Kaplan

Don't be fooled by the chic waitstaff and the gleaming cappuccino machine at Relish--this stainless-steel dining car was built in 1952 in New Jersey. The diner was spotted in 1995 by writer and designer Sandy Stillman. He spent three years convincing the owners to sell and then two more turning it into a retro restaurant that looks so good it's often used for TV and film shoots. Sleek vinyl booths, a white Formica bar, and blinds that filter the sunlight make Relish an unconventionally romantic spot. The menu, created by former Union Square Café chef Lou Silver, is ambitious, with entrées like asparagus-speared grilled shrimp ($10) and pan-roasted blue snapper ($21). In summer, tables are set up in the sprawling garden. It may lack that diner aesthetic, but it's the perfect place to sip a Metropolitan martini. 225 Wythe Ave., 718/963-4546, relish.com. --Shana Liebman

Stephen Starr was promoting concerts, opening nightclubs, and hosting a local radio talk show when, in 1995, he began making late-night drives past a sleepy diner on a street corner in Philadelphia's Old City. Starr bought the place and renovated the interior, retrofitting it with vinyl-padded walls, booths as deep as the bench seat of an El Dorado, and lights that resemble giant, skewered olives. When the Continental Restaurant and Martini Bar opened in 1995, it was an instant A-list hangout. Ten years later, it still attracts the random Sixer, Phillie, or celeb in town for a film shoot. Shoestring fries drizzled with Chinese mustard ($6) and a cheesesteak egg roll ($12.75) are just two of the almost 40 global tapas on the menu. The Continental transformed the neighborhood--it now anchors a buzzing nightlife district--and Starr's career. He has since opened a succession of high-concept restaurants, including Buddakan, Morimoto, and the Continental Midtown. 138 Market St., 215/923-6069, continentalmartinibar.com. --Caroline Tiger

Dining cars aren't the only American classics getting a makeover. Spend the night in a refurbished Airstream trailer at one of these hotels.