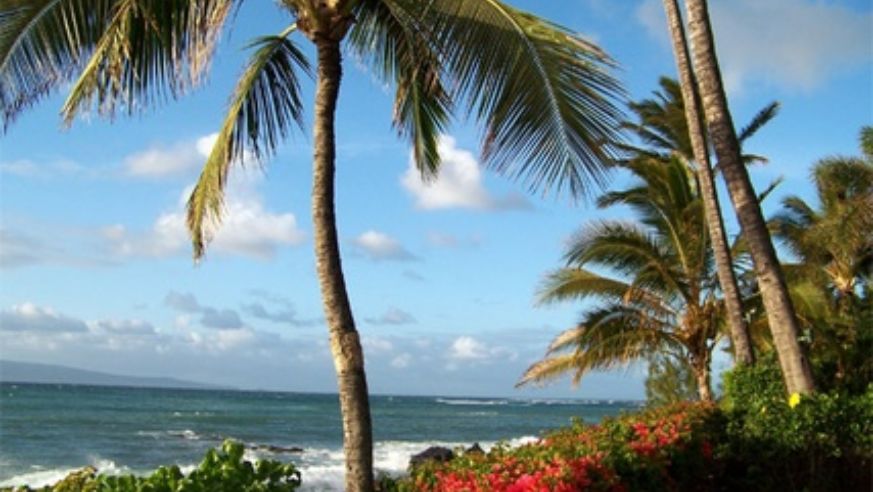 Still want to squeeze in a trip to Hawaii by the end of the year? (We did name it one of the top budget travel destinations for 2009, after all.) The state officially celebrated its 50th anniversary on August 21, but that doesn't mean the party's over.

In fact, if you use Facebook or Twitter—or just need some incentive to start—you could increase your chances of winning a free getaway to Hawaii. Marriott Resorts Hawaii, along with the Hawaii Visitors and Convention Bureau, Hawaiian Airlines, and Hertz, is commemorating the state's birthday by giving away 25 trips for two to Hawaii in the Tweet Yourself to Hawaii contest. To enter, you just need to provide your e-mail address—and if you have a Facebook account and/or a Twitter handle, you can get up to two more entries.

The prize includes round-trip airfare for two on Hawaiian Airlines from one of its West Coast gateways, five nights at a Marriott Hawaii resort, a Hertz rental car, a $100 resort dining credit per day, and selected island activities, depending on the resort. Trips must be taken by December 20, 2009.

The first drawing took place Friday, with additional drawings happening every Monday, Tuesday, and Wednesday until October 21. You can enter again (up to three times!) once each week and then follow Marriott Hawaii on Twitter to find out who won.

A separate Marriott contest, Tweetup in Hawaii, invites you to really use your social media savvy: To enter, you must create a video explaining in three minutes or less why you love Hawaii, upload it to YouTube, and submit a link to your video on the contest website by December 20. Marriott will post the videos on the site and select a group of finalists. On January 4, 2010, the public will be able to vote for their favorite clip, with the top vote-getter as of January 15 getting a "Tweetup" in Hawaii: Round-trip airfare for the winner and 11 guests, a seven-night stay at any two Marriott resorts in Hawaii, a luau dinner and show, a commemorative Hawaii state quarter for everyone, a keepsake group photo, and 25,000 Marriott Rewards points for the winner. For details, see the Tweetup entry page.

Hawaiian Airlines is also celebrating a different anniversary—its own. For its 80th birthday, the carrier is giving away 80,000 miles (the equivalent of two round-trip tickets from the West Coast to Hawaii) each week through September 23. To enter, play the Travel Through Time giveaway game online. It shows you Hawaiian Airlines' uniforms from different eras and makes you guess which year they were introduced (it also gives you hints!). Note: To enter the drawing, you have to join the (free) frequent-flier program at the HawaiianMiles sign-up site.

And if you don't want to leave your vacation plans to chance, there are plenty of 50th anniversary and fall promotions still going on:

• Four Hilton Family Hawaii hotels are offering your fifth night for just $50, plus a $50 spa, dining, or beach-craft-rental credit through the 50 Years of Aloha promotion (from $129, through December 20).

• Prince Resorts Hawaii has a Spring Into Summer/Fall Into Winter & Celebrate Hawaii's 50th special at its four resorts, providing a $50 daily resort credit, no minimum stay required (from $179, through December 22). For the skinny, visit the Prince deal site.

• Aston Hotels & Resorts has a Fall for Aston special with up to 40 percent off seasonal rates at its 25 Hawaii properties (from $83, through December 21). Details at the Aston deal page.

For other vacation package promotions, see our Hawaii Real Deals.

Recent Hawaii news on our blog