Heading to Europe? Have a Blue Lagoon layover

Some of the cheapest flights to Europe from New York City, Chicago, and Washington, DC., right now are on Icelandair and Iceland Express. For example, the lowest priced ticket for flights in mid-September between Dulles Airport and London Heathrow was recently on Icelandair.

The catch with these cheap flights is that they all make stops in Iceland, which lengthens the overall trip. Planes typically land around 6 or 6:30 in the morning, and then depart again around 7:45 or 8.

These layovers raise a question: Is there a way to take advantage of the time on the ground—say, until 4 p.m., or 7 p.m.—and enjoy Iceland a little bit before continuing your flight? Some travelers have found the answer is yes. They even deliberately pick a later departure out of the 34-year old Keflavik Airport to maximize their layover and have enough time to look around.

The most popular attraction to see is only a half-hour away: the milky Blue Lagoon.

We recently wrote about the Blue Lagoon in our story on affordable and picturesque public pools worldwide. Here's what we had to say:

The aptly named Blue Lagoon in Grindavik, Iceland, outside of Reykjavik, draws more than 400,000 visitors a year to its 1.6 million gallons of approximately 100-degree seawater. Steam rises from these sky blue hot springs across a surreal landscape of black lava mounds, and bathers slather themselves with silica mud, precipitated from the springwater and known for its relaxing (and purported healing) properties. Formed in the 1970s as a by-product of the neighboring geothermal plant (after the plant used the hot water, it was led back to the lava field and formed the lagoon), the Blue Lagoon spawned a wellness center in 1999. With a restaurant, a spa, a dry sauna, and steam baths, the facility draws visitors from around the globe. Accessibility: Year-round. Affordability: Day pass $42. Hours: Sept. 1–May 31, 10 a.m.–8 p.m.; June 1–Aug. 31, 9 a.m.–9 p.m. 240 Grindavik, 011-354/4-208-800; bluelagoon.com

So what do you need to know—practically speaking—to add a Blue Lagoon visit to your next overseas vacation?

Hopping a taxi is the easiest but also the most prohibitively expensive option, at up to $50 each way per couple.

Hopping a shuttle bus is easier and it only take 15 minutes to get from the airport to the spa. Bus lines leave daily from the main bus station close to the airport for a fare of ISK850 ($7.50) one-way per person. But Excursion buses stopping at the Blue Lagoon don't start until at 9:30 in the morning Sept 1 - May 31, so expect to have time to pass through passport control and enjoy a leisurely breakfast at the spacious and recently redesigned food court. (In the summer, there are more frequent, earlier departures, too.)

Returns are frequent as well, with the bus line Excursions running a 2:15 p.m. bus that arrives 15 minutes later at the airport every day all year round, with additional afternoon trips during summer months.

Rival bus companies to Excursions may have better schedules, so check NetBus and Gray Line for more info.

Remember to pack your bathing suit and flip flops in your carry on, as your checked luggage will be left at the airport.

A layover of about seven hours between flights is enough to get to the Blue Lagoon, relax, and then get back, without feeling rushed or panicked. But the capital city is a bit farther away to get to, and the downtown is a bit of a walk from the main bus station, so you are best advised to only explore the city if you're staying over for the night.

Would you include a stop at the Blue Lagoon on your next trip to Europe?

Would You Pay Extra to Sit in the Front of a Plane?

The Empire State Building is celebrating its 80th anniversary this year, and the 20th-century icon has not only debuted some stunning cosmetic renovations, but has completed a super green upgrade that's setting the bar for commercial buildings around the world. When visiting the ESB, the revamped lobby will make even hardened New Yorkers look up: A gold-leaf celestial ceiling mural was painstakingly recreated after spending years covered up by (shame!) a drop ceiling. And further inside, two Art Deco chandeliers that were originally planned for the building but never created have finally been designed and installed. During my visit this summer, I was so impressed by the lengths that the restoration went to in order to stay true to original techniques. The replaced marble panels in the hallways, for example, have been installed according to the original method of "butterflying" the slabs. That is, imagine slicing through marble as you would a loaf of bread, then opening the slices like pages of a book&mdash;the result is a series of mirrored pairs that line the walls and showcase the veining pattern in the marble, like a gleaming set of Rorschach paintings. It's this level of detail that makes the ESB's restored interior so gorgeous&mdash;even if you didn't know about butterflied marble and recommissioned chandeliers, the building's craftsmanship is evidently grand. The main focus of the ESB overhaul, while not as superficially show-stopping, is making a huge impact: a sustainability retrofit, prompted in part by the Clinton Climate Initiative. From replacing every window (more than 6,000) to overhauling the radiators, to reassessing tenants' energy usage, the ESB has reduced its carbon emissions by 38%, and will save an estimated $4.4 million in energy costs per year. The experience of visiting the Empire State Building has been streamlined as well: even in the high season, the average wait time is about 45 minutes&mdash;and once you reach the elevator bank, you'll shoot up to the 80th floor in 57 seconds. To shorten your wait by 20 minutes, book your tickets in advance online. In January and February (with the exception of Valentine's Day) the wait time's much shorter, about 20 minutes total. And if spending a winter's day on the 86th floor's observation deck doesn't sound appealing, stay cozy in the enclosed 102nd-floor Observatory. Or, try coming on the off-hours, any time of year. Early birds who arrive as the observation deck opens at 8 a.m. will have a much speedier trip to the top. The deck also stays open until 2 a.m. (the last elevator is at 1:15 a.m.), so those who saunter in after midnight will find the lines have dispersed. Bonus: Thursday through Saturday evenings, a wandering jazz-saxophone player will take your requests. To learn more about the Empire State Building, from the color of tonight's lights to more green initiatives, visit esbnyc.com. Have you been to the ESB lately? Have a memorable moment from your visit that you'd like to share? Post in the comments below! SEE MORE FROM BUDGET TRAVEL: 50 Reasons You Love New York City Confessions of...A New York City Street-Food Vendor 16 Awe-Inspiring American Monuments 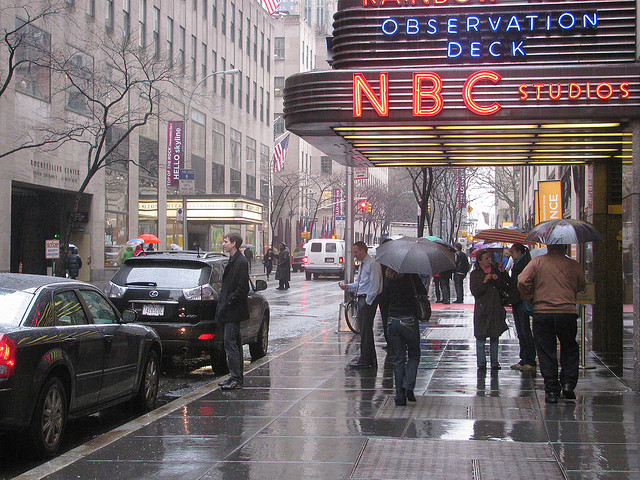 How To Score Tickets To Your Favorite Late Night Shows 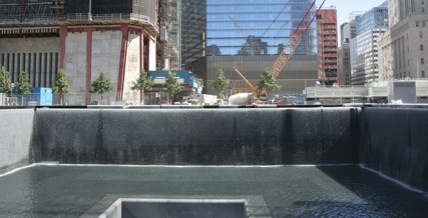 A sneak peek of the 9/11 Memorial site

One month before the 10-year anniversary of 9/11, I got a preview of the National September 11 Memorial in Lower Manhattan, which will be open to victims' family members on Sept. 11, 2011, and unveiled to the public one day later. The memorial plaza sits on eight of the 16 acres that comprise the redeveloped World Trade Center site, and consists of twin memorial reflecting pools in the footprints of the original twin towers, around which are inscribed the 2,982 names of the people who died in the attacks on Sept. 11, 2001 and on Feb. 26, 1993. Rather than arrange the names alphabetically, they are arranged by what organizers call "meaningful adjacencies," so that, for instance, all the first responders are grouped together, those that died in World Trade Center North are grouped together and those that were on Flight 11 are together. Friends and family of the victims could also request that names be placed next to one another that had particular meaning or significance to them. There will be kiosks where visitors can go to search for names and their placement on the memorial by name, company, flight, tower or even hometown. The rest of the plaza consists of more than 150 trees, all of which are oak, except for one, a Callory Pear tree, also known as the "survivor tree." It was at the World Trade Center on Sept. 11 and the Parks Department rescued it from the rubble. It had been reduced to a stump, but has since sprouted new branches. At the center of the plaza lies the Memorial Museum, which is slated to open in 2012. The remainder of the World Trade Center Redevelopment project consists of the Transportation Hub, which will connect a PATH station with 13 subway lines, and several commercial office buildings, including Four World Trade Center, which when completed will be the future headquarters of The Port Authority of New York and New Jersey, and One World Trade Center (formerly called the Freedom Tower), which will be the tallest skyscraper in New York at 104 floors and 1,776 feet to the top of the building's spire. To visit the site, guests have to reserve a visitor pass online at 911memorial.org. Passes are free and can be reserved as far as six months in advance. There are daily limits, which is why The National September 11 Memorial &amp; Museum at the World Trade Center Foundation, Inc. recommends reserving online. The entrance to the site will be at Greenwich and Liberty Streets. When it opens, the memorial will still be surrounded on all four sides by construction. Hard hats not required. More from Budget Travel: 50 Reasons You Love New York City More airports consider ditching TSA U.S. urges travelers to be vigilant in aftermath of bin Laden death 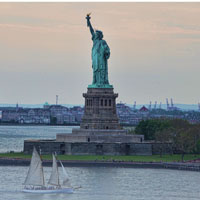 How do you choose where to go on a three-day weekend?

Hotwire.com released its list of the top-ten most booked destinations for the upcoming Labor Day weekend, and as usual, big cities dominate. New York $195 (average nightly hotel price) Boston $129 Chicago $90 Las Vegas $95 San Francisco $135 Toronto $93 Vancouver $116 San Diego $94 Dallas-Fort Worth $59 Washington, D.C. $89 if (WIDGETBOX) WIDGETBOX.renderWidget('31b1df89-acb6-47db-9ac1-870808ce3966');Get the Poll Creator Pro widget and many other great free widgets at Widgetbox! Not seeing a widget? (More info)But it came as a slight surprise to me that New York—which has far and away the highest average hotel price on the list—ranks number one. Sure, the Big Apple is great. We have the Statue of Liberty, museums galore, pizza, Broadway, the Yankees, and most importantly, the Budget Travel offices. But I would have suspected that budget-conscious Americans might flock to more wallet-friendly regional hubs on a three-day weekend. So what gives? Leave a comment and let us know how you decide where to go on a three-day getaway! (And by the way, you don’t need to shell out $195 for a hotel in New York! Check out our New York hotel page for stylish options under $150.) MORE FROM BUDGET TRAVEL: Times Square Like a Local A Tour of New York's Best Street Food New York's Hopping Beer Scene