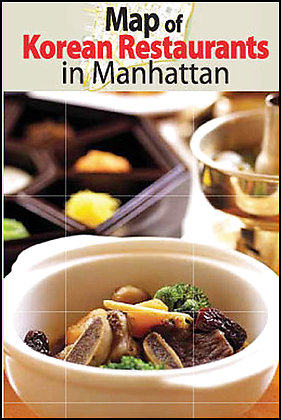 There's a lot going on in South Korea right now. Thanks to the country's growing economy, its pop culture--including movies, music, television dramas, and fashion--has surged across Asia (and in turn has driven record numbers of tourists to South Korea). This cultural trend is called Hallyu ("Korean wave"), and it's coming to America. Korean singer Rain, often compared to pop star Justin Timberlake, recently performed in two sold-out concerts in Madison Square Garden and will appear in an upcoming Pepsi commercial with American singer Christina Aguilera. Meanwhile, Hollywood is remaking many popular Korean movies, including Il Mare, which was recently released as The Lake House and starred Sandra Bullock and Keanu Reeves.

To introduce Hallyu to Americans, the Korean Cultural Service, an organization that represents South Korea's Ministry of Culture & Tourism, has teamed up with three other Korean organizations to produce a map of Korean restaurants in New York City. This handy guide lists top restaurants in Manhattan, plus romanized translations and descriptions of popular menu items. Download the printable map at koreanculture.org.

We've reprinted some of the menu translations--and where you can sample these dishes.

5 Korean Restaurants in New York City
Note: All of these restaurants are located in Koreatown (generally between 32nd and 36th Sts, between Broadway and Madison Ave.) 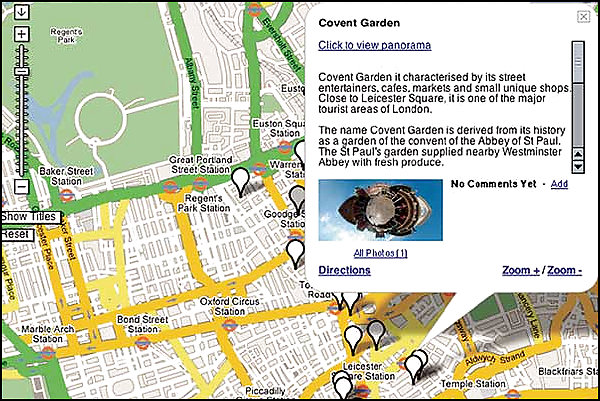 Last year, Google began allowing the public to use its technology to create customized online maps, free of charge. Since then, tons of companies--including BT--and regular people have programmed "mashup" Google maps that highlight selected locations with teardrop-shaped markers and info boxes, often with addresses, URLs, phone numbers, and commentary. Like bloggers, the mappers have interests that run the gamut. Maps may focus on bird sightings (geobirds.com), comic-book stores (hijinxcomics.com/maps/cbia), drink specials in Atlanta (atlspecials.com), strip clubs (stripclubmap.com), or New York City bicycling routes (nycbikemaps.com). Sites are generally produced by amateurs and are not comprehensive. Still, travelers may find them helpful; one, for instance, is dedicated to the most dazzling views in London (communitywalk.com/map/65). The foremost resource for maps is googlemapsmania. blogspot.com. Plug in a topic under "Search This Blog" or scroll through the subject list on the right-hand column. We recently found maps with markers for golf courses, hot springs, maternity-wear stores, hotels in Rome, brewpubs in Oregon and Washington, Tokyo sake bars, favorite scuba-diving sites, secret fishing holes, and Chicago hot dog stands. DIY Google Maps Can't find a map for the topic you're interested in? Create your own--if you're a card-carrying techie, that is. The detailed tutorial at google.com/apis/maps assumes you know JavaScript, as well as the longitudes and latitudes of the places you want on your map (searchable at geocoder.us). MapBuilder.net is a bit less confusing, but you still need to know basic programming.

When a major storm hits the Caribbean, most airlines and hotels eventually wind up waiving the usual restrictions so that customers can change or cancel their plans free of charge. But because policies have traditionally been announced on a case-by-case basis--and at the last minute--you had little choice but to wait and cross your fingers. Now, after two brutal hurricane seasons, a few airlines and tour operators have taken steps to ease travelers' concerns. The best policies explicitly state that customers can make changes for free once the National Hurricane Center (nhc.noaa.gov) declares a hurricane watch or warning. Spirit Airlines allows you to rebook without a fee as soon as the NHC officially announces a hurricane watch at your arrival or departure airport. Clients of Worry-Free Vacations or sister company NWA WorldVacations who are headed to Mexico or the Caribbean can switch destinations for free after hearing about a watch or a warning, as long as the new booking leaves within seven days of the original departure. Or, for a $50 fee, you can request credit for another trip to be booked within 60 days. A few tour operators have beefed up their travel-insurance policies. Apple Vacations and TNT Vacations guarantee a free replacement vacation if a hurricane interrupts your trip. (An &quot;interruption&quot; is defined as a 24-hour period during which guests are displaced from their hotel.) In the past, you might have received company credit or a refund for the interrupted portion only. The policies cost $50--$70 extra for Apple Vacations, $95 for TNT. Cheap Caribbean.com's travel insurance, formerly an optional $49 purchase, is automatically included in all packages this year. With the policy, you're allowed to change or cancel your trip once without penalty up until three hours before departure--if the NHC announces that a hurricane is within 48 hours of your destination, departure, or connecting city. Beware, however, of hurricane policies that don't actually guarantee anything. Expedia first told clients of its Hassle-free Hurricane Promise last year: Agents will help rebook a ruined trip and try to convince hotels and airlines to waive fees. Essentially, Expedia will be an advocate for its customers--but isn't that what an agency is supposed to be? 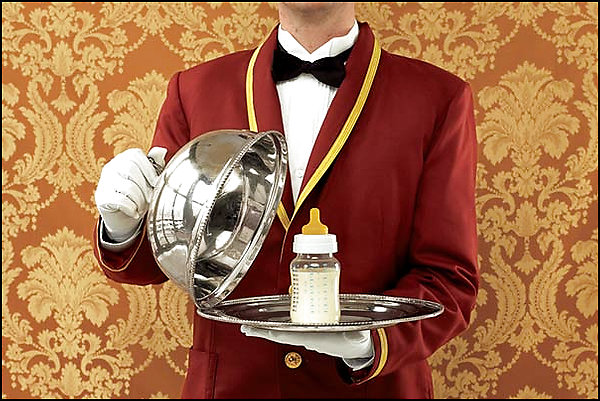 Parents with young kids would love to get away, but traveling often doesn't sound worth the trouble. To make travel as easy as possible, alleviate parents' fears, and build business connections, some hotels and resorts are partnering with established non-travel brands. Select Loews hotels offer guests loaner Fisher-Price toys and play sessions with storytelling, music, snacks, and drinks at $10 per child. Atlantis, the megaresort on the Bahamas' Paradise Island, has teamed with Johnson's to give families a kit with baby creams, washcloths, a night-light, and a lullaby CD. The resort also created a hotline for parents to order baby bathtubs, bottle warmers, strollers, and babysitters. &quot;Juggling the kids and planning the trip is hard enough,&quot; says Dr. Jennifer Trachtenberg, a pediatrician and mother of three who provided a list of travel tips included in the Atlantis kit. &quot;This takes away a lot of the headaches.&quot; Even some hotels that don't advertise baby-friendly policies may help parents out. Diapers, formula, and even baby-proofed rooms can be waiting when you arrive.

Upsold Down the River

Travel agents argue that upselling can in fact be good for their clients. &quot;If we put customers in the absolute cheapest room at a hotel in the Caribbean, they're going to come back annoyed with us because they got the worst room at the resort,&quot; says William Caldwell, president of Caldwell Travel in Nashville, Tenn. &quot;If we get them to spend a little more on a great room with a view, they'll come back happy.&quot; Certainly, travelers want to know what the various options are, and what they cost. What you may not know is how the incentives work--and how they affect the pitch you'll hear. Earlier this year, to give just one example, Marriott registered the 100,000th member of an online training program that teaches agents how to talk clients into buying spa treatments and other extras. Agents who complete the course see their commissions raised from 8 percent to 10 percent. You can't really blame a company for trying to get its customers to spend more. But some agent programs involve underhanded price manipulations, and all the spin in the world won't make them look like good news for the consumer. Last fall, Enterprise Rent-A-Car began registering agents for a special program in which client cars can be reserved at a discounted price and a 5 percent commission, or at a higher price and a commission of up to 15 percent. About 4,000 agencies have signed on, and there's no requirement to clue customers in. With US Airways Vacations' Commission Choice program, agents can likewise receive larger commissions for packages sold at inflated rates. In the Travel Agents section of the company's website, a hypothetical Las Vegas booking demonstrates how, at a standard $300 price, the agent receives an 8 percent commission, or $24. By opting for Commission Choice and charging the customer $330, however, the agent receives 15 percent, or $49.50. The website even acknowledges that there's something to be ashamed of: &quot;Commission Choice was built so that the increase in price does not appear on either your customer's itinerary or their credit card. Your customer will only see one final package price.&quot;