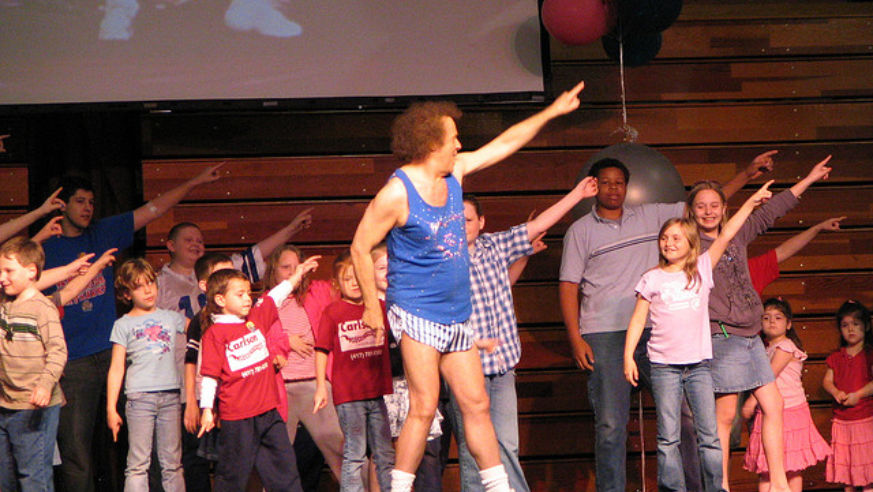 Happy #ThrowbackThursday! This blog post was one of the first ones I ever wrote for Budget Travel back when I first started out as an Online Editorial Intern in 2011. #TBT

In the latest off-the-wall safety demonstration video from Air New Zealand, exercise guru Richard Simmons makes sure everyone onboard is 'Fit to Fly.'

This three minute and thirty-seven second spot of airline safety was shown [on flights in 2011] in all its sequined glory. Everyone in the video looks like they had a great time filming, including Amazing Race host, Phil Keoghan, who has a cameo toward the middle. Simmons and the rest of the flight crew, decked out in ultimate 80s exercise fashion and sweating to the beat, take you through the usual airline warm-ups—putting on your seat belt, stowing your baggage and knowing what to do in case of an emergency—with such flair you almost wish every airline safety video was this exciting.

When demonstrating how to lift baggage into the overhead compartment and store it under the seat, Simmons yells, "Stretch and slide! Yeah! You're a giraffe!" He later encourages passengers to count the rows ("and two...three...four") to the emergency door closest to their seats. In a demonstration showing the airplane's exits and explaining how the emergency lights will turn on, he says, "Come on everyone, let's pony!" and leads the crew to safety.

This is not the first wacky safety-demo video to come out of Air New Zealand. In 2009, we wrote about the controversial "Bare Essentials of Safety" video in which the flight crew appeared covered in nothing but body paint to resemble their uniforms.

Is this the craziest airline safety video you've ever seen? Who would you like to see in one? Please share your thoughts in the comments section below.