Yesterday, I had a fun conversation with the folks from Aloft, one of the new offshoot brands from Starwood. Brian McGuinness, the SVP, Global Brand Leader for both Aloft and Element (as well as Four Points by Sheraton), started by trying to help me understand how all these groups are different. It seems every chain has decided to expand into the hip/affordable niche—and I don't know about you but as a consumer, it's pretty hard to know how the Andazs differ from the Alofts; the Indigos from the Elements.

So let me help you…Aloft has opened 20 properties already, and they have 22 more coming through the end of this year. They're focusing on airports and places like the DC area. They are all about style and design (done by David Rockwell) and things like "vibe" (DJs in the lobby). A couple things Brian told me that I got particularly, geekily, excited by:

• You actually get to choose your own room when you check in, which is done at a kiosk. Want to be close to the elevator, but on the northern side of the building (for whatever reason…)? The choice is yours. Apparently, they did some studies that showed that travelers are happier with the end product when they get to make all the decisions. As someone who always wants to switch my seat on a plane before checking in, I can see how that works.

• They don't charge you for every little thing. There are free bikes on site. Wi-Fi is free. The gym is free. These things aren't hard for a hotel to do, but they're just the kind of thoughtful touches that earn my loyalty.

As airlines cut their service to Europe, how to save on fares? 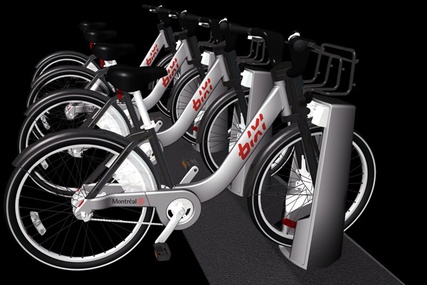 Biking in Montreal: A new program makes it simple and cheap

Locals in Montreal boast that their city is the cycling capital of North America, with 250 miles of cycling routes and an 8-day Bike Fest every summer. It's an aspect of the city that tourists often miss, but this spring the paths will become more accessible to them and others. On May 1, an inexpensive sharing program called Bixi (a combination of bicycle and taxi) begins, and riders will have access to 3,000 bikes stationed at 300 terminals throughout the metro area. Go online to locate a station near you and check the number of bikes or open parking spaces available. Release the bike at the terminal with a swipe of your credit card, and return it to any station throughout the city. In the past few years, urban bicycle programs have been gaining momentum in European cities, including Copenhagen, Barcelona, and Paris. But Bixi faced a hurdle its European predecessors didn't: Montreal's harsh and snowy winters make it impractical to hook up the self-service rental terminals to the city electricity. The program's designers solved the problem with some technological innovations that earned the company a nod in Time magazine's 50 Best Ideas of 2008. All the stations are solar-powered and able to be disassembled during winter months. The sleek aluminum bikes were designed by Montreal-native Michel Dallaire (the creator of the 1976 Olympic torch) to be durable and easy to spot. RFID technology also helps prevent theft. A 24-hour membership pass is $4, plus a usage charge. The first half hour is free, but the second costs about $1.25. EARLIER Affordable Europe: Bike cities for free (or nearly free)

Renting an "electronic-toll-payment device" such as E-ZPass or I-Pass is now a bit more convenient. The company who rents the things out, the Highway Toll Administration, has been providing the devices through rental car agencies for several years. Now the company has teamed up with Travelocity in a program that David Centner, HTA's president and CEO, says is based on the Netflix model. Here's how it works: When you book a car rental on Travelocity, you can click a link to "Add a Toll Device" at the end of the process. HTA will mail you a transponder (a bit less of a mouthful than "electronic-toll-payment device"). Use it in your rental car and then return it in the postage-paid envelope that comes with the device. The service costs $1.99 for each day that you rent the car, plus a $5 shipping charge and, of course, the cost of the tolls. You'll have seven business days to return the device after you return the rental car. So far, the program is only available in the Northeast and the Midwest, but Centner says that everything is working smoothly since the program officially launched on February 17. He expects to expand it to other parts of the country in the next few weeks. Has anyone tried this yet? How did it work out?

A few good links: Travel stuff to leave home without

United Will No Longer Listen to Your Phone Rants The call center in India is being closed down. [Jaunted] Tripper Bus offering $1 fare between NYC-DC area BoltBus and MegaBus have some competition. [Newyorkology] 7 things to leave at home on your next big trip Not much love for the rollie bag&hellip; [Gadling] Travel trends in a down economy Travelers are heading to smaller, secondary cities; families are hitting the theme parks; and cruisers want to leave from their home port again. [AP/Yahoo] America's Rip-off Airports Most are in the Midwest and Southeast. [Forbes.com]