Last fall, BT editor Valerie Rains reported on a new flight search tool called Hipmunk, which features a cartoon chipmunk mascot in aviator goggles and a scarf. Aside from its cute factor, the site has become a big hit due to its simplicity: after a quick search, results are displayed on a bar-graph–style calendar, color-coded by airline. Hours are listed across the top of the chart, and each flight is represented by a bar that stretches between the departure and landing times. In addition, you can sort the listing by price, departure time, or something called "agony," which factors in duration, layovers, and number of stops.

Last week, the site unveiled its newest feature, a small Wi-Fi icon that's shown on any flights that offer in-flight wireless internet. I know, I know. This news should make me excited. But for a site known for its streamlined design, I wouldn't choose Wi-Fi as the one amenity to clutter up the otherwise sleek search screen. (I'd personally rather see an icon representing carry-on allowance, checked baggage fees, or availability of in-flight meals if I had to choose one.)

In general, Wi-Fi is one onboard amenity I personally haven't gotten on board with. I like the radio silence imposed by a flight—it's a few hours that I can stick my nose in a novel and stop worrying about texts and emails.

Am I an old-fashioned snob who can't embrace technology? Or are there others out there like me? Where do you stand on in-flight Wi-Fi? Vote in our poll and sound off in the comments below!

Do you use Wi-Fi when you fly?

iPads take on hotels, airlines and the Eiffel Tower

Some travelers are born to shop. Others seem to have been born to do little else than lie on the beach. And then there are travelers who are born to be wild. If the idea of hopping on a motorcycle and tearing up the pavement gets your blood flowing, an upcoming Trip Coach column is for you. We'll be covering the basics of motorcycle vacations, with loads of helpful info for those interested in riding a hog for an entire road trip, or just for an epic, adrenaline-filled afternoon. To get us started, please send in your questions related to motorcycle vacations right now. You might be wondering: Who, exactly, can rent a motorcycle? What are the requirements? What destinations are best for motorcycle trips? Are there destinations that offer special motorcycle tours and lessons for beginners? Are there services that'll ship a motorcycle across the country, or overseas? What makes sense in terms of gear, luggage, what to pack, and what to leave at home? What are the most common mistakes newbies make when first embarking on a motorcycle trip? Now it's your turn. Please send us all of your questions related to motorcycle vacations, and we'll address the most pressing issues in an upcoming issue of Budget Travel. MORE FROM BUDGET TRAVEL: The Best Road Trip in Hawaii Trip Coach: National Parks Road Trip: National Parks (Minus the Crowds)

Some information is simply meant to be passed on from person to person, rather than harvested from aimless internet searches&mdash;how to ride a bike, say, or tie a Double Windsor or assemble a perfect pie crust&mdash;and in my opinion, that list includes piloting an RV for the first time. With summer out there on the horizon (albeit still so far off, sadly!), I've been doing some serious RV dreaming. But having grown up in a family that never RV'ed (unless you count tossing a mattress in the back of my dad's cargo van for our annual 16-hour ski-season drive to Colorado, which I don't), I could use some first-person advice from real-world road-masters. What would you tell a first-timer about to embark on her inaugural RV vacation? I want to hear all your best road-tested tips&mdash;the easiest vehicles to operate, the best strategies for plotting a route, your favorite RV campgrounds, the ultimate packing list, smart money-saving tricks, your worst mistakes and your greatest discoveries. If you have a free minute, post your advice and expertise in the comments&mdash;I can't wait to read it (and put it to use)! See more from Budget Travel San Francisco: 3 Worthy Bike Rides Ask Trip Coach: Ski Vacations The Ultimate Packing Guide RV Rental Saving Tips

A road trip is a great way to tell a person's story, as The Cranky Flier proves

Has a friend ever said, "I'd like to write a book about my life, but I'm not sure where to start"? Well, you ought to buy that friend a copy of Brett ("The Cranky Flier") Snyder's first book, Where the Hell Am I Going? Explain that it's a fantastic model of how to write a road trip story. (I've read about 100 road trip stories over the years, and this is easily one of the top five best.) The book may finally inspire your friend to cover the high points of their life as anecdotes prompted by the sights seen on a cross-country adventure. After all, a road trip story is much, much more fun to read than the typical autobiography. I would never have picked up a memoir of Brett Snyder&mdash;even though he's the author of the acclaimed aviation blog The Cranky Flier. Yet when I heard he had written a short book about his two-week cross country road trip, I was game to read it, mainly because I could imagine myself wanting to take a similar trip. The title Where the Hell Am I Going doesn't really refer to the route taken by Brett. (I feel I know the author well enough now, having read this book, that I can refer to him by his first name.) Brett pretty much knows in advance the main routes he will take in a loop from where he lives with his wife in southern California through Texas to Florida, and then back again via a path that takes him through Indiana and Oklahoma to Phoenix. The title instead refers to the thinking that Brett does while he's driving. Newly married yet out of work, every town he passes through seems to trigger a memory from his life, such as where and how he met his wife and where and how he developed his undying love for airports. Along the way, he helps get out the vote for Obama in a small town in Florida on election day, and he gets lost down some country roads (despite his GPS unit that talks in an Aussie accent). A road trip reveals a person's character better than any formal autobiography could. At one point, Brett has been driving for a while after having made a pit stop at Walnut Ridge, Ark., to dine at Parachute Inn (a restaurant made partly out of an old Southwest 737). It dawns on him that he forgot to tip the server. He calls the restaurant to apologize and later mails a tip. A road trip also makes plain a person's fears, too, assuming that the writer is as honest as Brett ("What if my car breaks down and I'm eaten by wild javelina?"). After pulling him over for speeding a second time in Oklahoma (d'oh!), a police offer asks Brett to leave the car and step into his cruiser. The officer chats while verifying the records."So what do you do for a living?" he asked. I thought for a second and said, "Well, I was actually just laid off." For some reason, it was extremely embarrassing for me to say that. It's like I failed and now I had to wear this scarlet letter saying so. If you have any interesting hobbies, a road trip's a great way to indulge them. Brett's love of aviation brings him to Millstone, Ind., to see "a simple and moving" memorial for an airline crash ("Maybe Kiwanis should be put in charge of all air crash memorials. This one was perfect."); and the headquarters of Southwest Airlines, where he meets the CEO (because of Brett's seat in the travel media cockpit) and helps to judge the company's Halloween costume contest. ("The contest was between departments, and this was not a faux rivalry. I think the Marketing team would have killed a man to win.") Best of all, an excellent road trip story inspires you to pack up your bags and head out to see the same (or similar) sites. Like "The Thing?" near Dragoon, Ariz., or a spot in Cleveland, Tenn., with "a little farmhouse with an old windmill surrounded by leaves that couldn't have been painted any better." MORE The Cranky Flier writes a book Budget Travel's road trip page 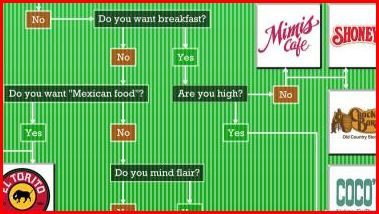 Finally, answers to the road-trip question: Where should I eat?

Have you seen this? Kinda funny. The blog Eating the Road has tried to solve the question "Where Should I Eat?" with a flow chart for chain-restaurant dining crowd. By following prompts like "Are you high?", "Are you a ninja?" and "Can you stand Guy Fieri?" you're steered along to one or another restaurant chain. Just what every traveler needs, right?