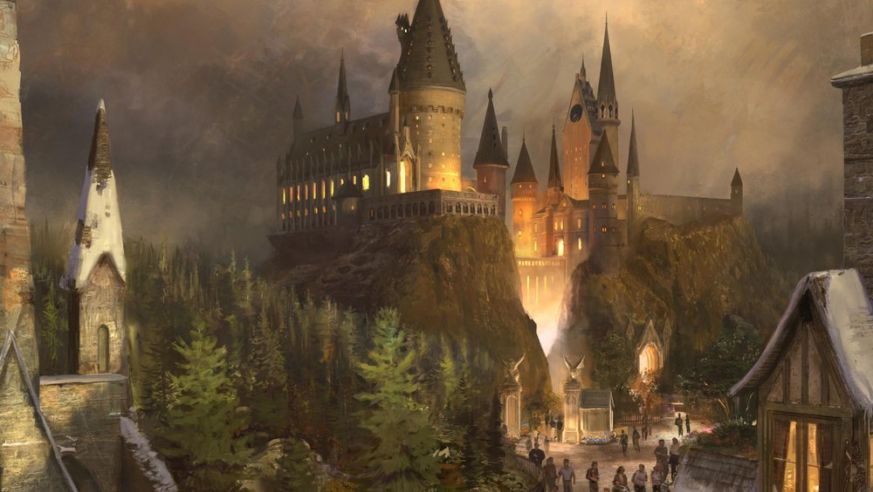 Here's a glimpse of what the "next" Hogwarts will look like when the Wizarding World of Harry Potter opens at Universal Studios Hollywood next spring.

The words "press conference" don't exactly send a chill of anticipation up our spines most of the time, but today's announcement by Universal Studios Hollywood is the exception: Harry Potter and the Forbidden Journey is a 3D-HD experience that will be the centerpiece of the new Wizarding World of Harry Potter opening in California next spring.

The new Wizarding World, essentially a theme-park "land" of its own, is of course modeled after the popular attractions at Universal Orlando Resort and Universal Studios Japan, but the president of Universal Studios Hollywood, Larry Kurzweil, promises a "new, compelling experience" that will be the "next chapter" for the franchise.

Harry Potter and the Forbidden Journey will take visitors soaring over Hogwarts, a Quidditch match, a dragon's attack, and a Whomping Willow. The ride will blend robotics, filmed action sequences, and special effects. Guests will don Quidditch-inspired 3D goggles before being swept along an elevated track. The new Wizarding World will also boast a family coaster, "Flight of the Hippogriff," and an array of Potter-themed refreshments at Three Broomsticks, Hog's Head pub, and Magic Neep and Butterbeer carts.

WE WANT TO KNOW: Have you visited the Wizarding World of Harry Potter in Orlando? Are you looking forward to checking out its Los Angeles cousin next year?