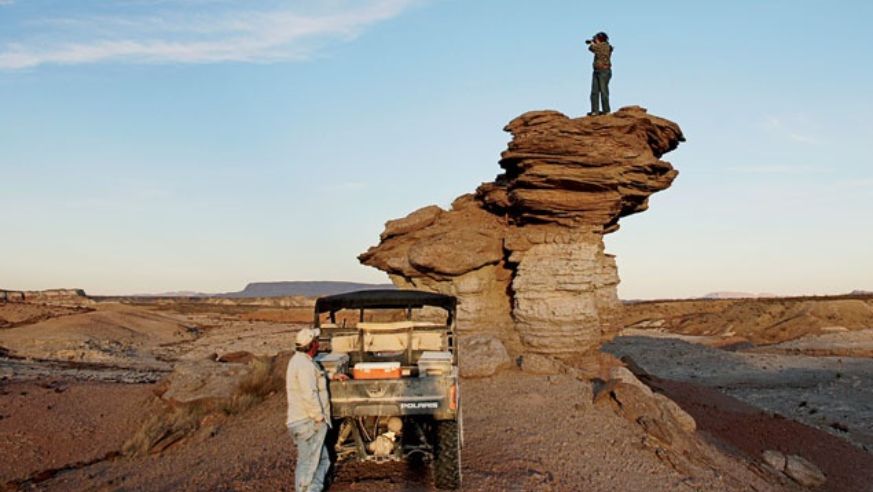 Lori Balton scouting for an upcoming Western in Terlingua, Texas.

Movie scout Lori Balton, the woman behind some of the most travel-inspiring settings ever seen on film, shares her tricks of the trade. (Rule No. 1: It's OK to get lost!)

Q. What's your starting point when you search for a film location?
Lori Balton: I love Google Images, because it's so wonderfully random—you never know where it's going to lead you. I was looking for otherwordly locations for Land of the Lost, and I put "otherworldly locations" in Google Images and went from there. You get these weird trees and rock formations in Eritrea.

Q. Once you've got a location, how do you find the best spots to shoot?
My favorite thing is to just talk to people. And it's also nice to give yourself the freedom to get lost. I find some of the best things by taking a left where I should've taken a right. In fact, you kind of have to do that. On A River Runs Through It, every time Robert Redford came to town I was nervous he would discover something I hadn't found, so I'd get to the end of a road, and say, "Well, I can't stop here." What if around that curve, there's something a little bit better?

Q. Do you do that on vacation, too?
Oh, absolutely—and I drive everybody crazy! But that's why I love my job, because I'm curious about people, and I'm curious about culture. I don't like to go on a vacation where you just sit and relax.

Q. Are there places that you feel are played out or too cliché to go to?
I have to say most emphatically no. I hate that people will shy away from locations and say "We've seen that before." You've seen it before because it's a great location. So why are you so afraid of seeing it again? Locations like Monument Valley—sure, you've seen it in a lot of Westerns. But it's such a striking place and the light is so incredible that you can shoot it in a million different ways, and I don't think people will ever get tired of it. So you've got to find an interesting way to shoot it!

Q. You must have perpetual jet-lag. Do you have any advice?
Two things that I can't do without. One is I drink a ton of water. Staying hydrated really helps with the time differences. And the other stuff that I use is saline solution. Use two shots of that in your nose every night and every morning and it really clears everything out, especially when you're traveling on airplanes a lot. People are like, "Ew! You do that?" And it's like, "OK, don't do it. You'll live to regret it!"