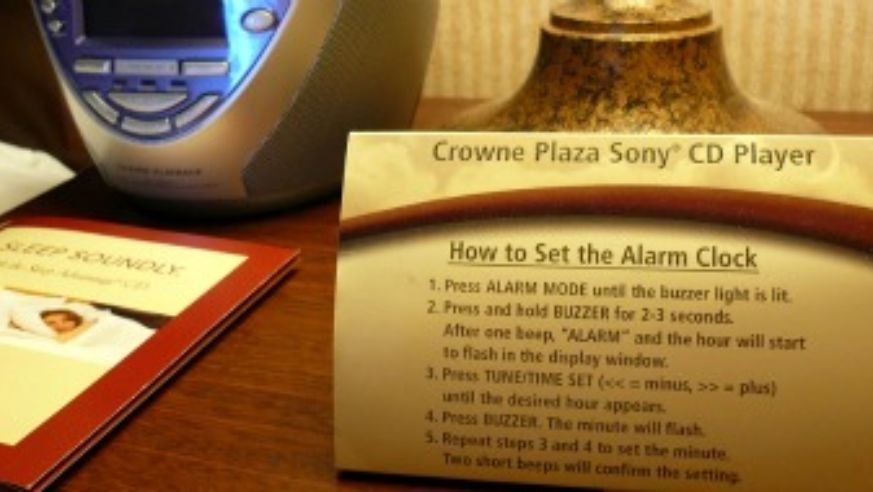 Courtesy Robert S. Donovan/Flickr
The complicated instructions for setting an alarm clock at a Crowne Plaza

Hotel alarm clocks are surprisingly tough to use—especially when you're jet lagged. You can't be sure a clock will sound off at the correct time if you're not familiar with how to set it. Who wants to spend five minutes fumbling around with a strange gizmo when you're exhausted after a red-eye?

Many hotel clocks require you to hold one button while pressing another. You won't find that "user experience" anymore on most of the clocks sold for Target and other home supply stores. But hotels continue to use clocks with this non-intuitive design, perhaps because they're cheap to make. Add buttons for a clock radio, and things can get complicated fast. And where are the volume controls?

The last time a hotel chain unveiled a fresh model of alarm clock was in 2005, when Hilton rolled out a radio-controlled clock that always sets itself. On the bright side, this clock only asks you to set your wake-up time. But on the downside, many travelers complain that this model clock is often broken, and the only way to fix one is to call down to the front desk for a replacement, according to designer Don Norman.

The best workaround is, of course, to pack your own alarm clock. Then be sure to unplug the hotel's alarm clock, eliminating the chance that an alarm set by a previous guest and never erased will accidentally wake you up.

So: What are the BYOC (bring your own clock) options, including apps for smartphones?

Any simple, small clock will do the trick, and you can set the clock by checking the local time at Onlineclock.net. But L.L. Bean has gotten rave reviews (meaning: 560 customers out of 716 would recommend) for its LED Nightfinder Alarm, introduced in 2009. It has a few perks:

It has only a couple of buttons.

It's lightweight and only is about the size of a pack of cards.

The case flips back and doubles as a handy stand, with a nonslip surface.

Bonus tip: If your alarm clock is battery powered, you can prevent the battery from running dry during non-use by simply taking the battery out, placing a Band-Aid down the length of each so its two terminals are covered, and replacing it in the clock. When you're ready to use the clock, peel off the Band-Aids to expose the terminals.

Smart phone owners may want to try one of the alarm clock apps that has received more than a thousand 5-star reviews from Android users and was picked as an Apple App Store favorite: Alarm Clock The sound goes off even when the screen is locked or if your device is in silent mode. (free, Android and iPhone/iPad).

Which Travel Rewards Program Has the Most Valuable Points?