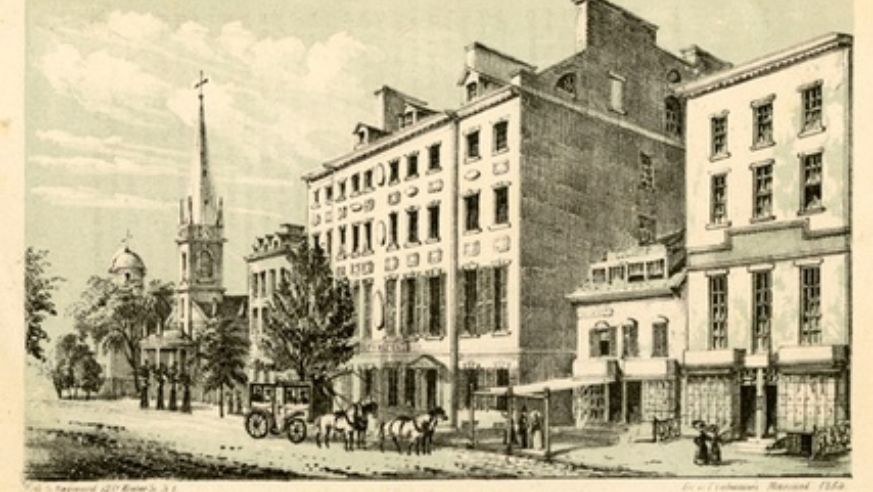 Courtesy A.K. Sandoval-Strausz
The first functioning hotel in the United States was the City Hotel in Manhattan

A new book from A.K. Sandoval-Strausz's, Hotel: An American History, is full of fun tidbits. Here are eight facts that surprised us.

1. Hotels as we know them now are a distinctly American invention. Large hostelries had been built earlier in Europe and elsewhere, but these were primarily for kings and nobles.

2. Before the age of hotels, American travelers stayed at inns and taverns where they had to share beds. "After you have been some time in bed," complained one wayfarer in 1767, "a stranger of any condition comes into the room, pulls off his clothes, and places himself, without ceremony, between your sheets."

3. The first U.S. hotel was City Hotel, a five-story, 137-room hostelry located on lower Broadway in Manhattan. It opened in 1797.

4. In the 1840s, Americans considered it to be unpardonably rude to ask for room service because this implied that you thought yourself too good to sit at the same table with everybody else. In the world's first modern democracy, this was unforgivably snobbish.

5. One nineteenth-century minister preached that hotels were immoral. Asked why, he explained that any establishment that sold liquor and contained so many beds had to be sinful.

6. The Civil Rights Act of 1964, which outlawed discrimination in hotels, motels, and other public accommodations, was based on an ancient Roman law code from 530, known as Justinian's Digest. The ancient rules prohibited innkeepers from picking and choosing which travelers they would accept as guests and which they wouldn't.

7. The apartment building as an architectural type is partly modeled on the hotel. Throughout the nineteenth-century, many wealthy American families chose to live permanently in hotels because the work of cooking, cleaning, and laundry was done by hotel staff rather than wives and daughters. Building designers soon adapted hotel architecture to create a new kind of shared dwelling.

8. Hotels helped to advance the settlement of the U.S. frontier because they allowed tourists to experience the appealing weather and natural beauty of new places. Hotels like the Antlers in Colorado Springs, the Raymond in Pasadena, California, and the Ponce de León in St. Augustine, Fla., spurred huge migrations to surrounding regions.