How Do You Stretch Your Summer?

I’ve never accepted the notion that summer ends on Labor Day. Yeah, the kids are back in school and the highways and commuter trains are crowded with folks back from the shore. But the official beginning of fall—the equinox—isn’t until September 22 this year. And for some reason I have to remind everyone I know every year that September temperatures around the U.S. average in the 70s. That means you’ve still got at least a few weeks to make the season last.

My family has a tradition of grabbing as many long weekends in September and October as possible. We’ll make one–tank escapes from our home in New York’s Hudson Valley to pay one or two more visits to the newly deserted beaches of Long Island’s east end and the still–warm waters of mountain lakes in the Catskills. Our spontaneous jaunts aren’t just to prove a point—they’re a chance for us to shake off some of the cares of the new school year and savor the mild temperatures and ever–shortening hours of daylight. My elementary–school–age daughters have even talked me out of my curious habit of taking them to the Central Park Zoo on the hottest day in July—now we opt for a breezy September Saturday when crowds are smaller and ice cream cones don’t melt before the first lick. (And if I can get the girls to stroll north from the zoo just a few blocks, I can even stretch that day trip to include a stop on Fifth Avenue’s Museum Mile.)

What are your favorite September and October weekend getaways? Any tips for those of us who might want to follow in your footsteps? We’d love to hear your ideas!

33 Most Beautiful Places In America 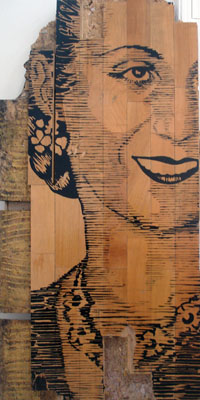 Calling all Evita fans, this year marks the 60th anniversary of the death of Eva Peron, the political activist, second wife of Argentinian President Juan Peron, and the most celebrated woman in Argentina. In honor of her death, the Evita Museum in Buenos Aires has brought portions of their exhibit to New York for the first time ever and the 1978 musical, Evita, has returned to Broadway. If you're in New York, check out the musical&mdash;it stars Ricky Martin and Elena Roger (who just so happens to be the first Argentinian actress to play the role of Evita on Broadway). Prices start at $67 for rear mezzanine seating and can be purchased in advance via Ticketmaster, but if you're looking to save money, you can also try for same-day discount tickets at one of the TKTS booths&mdash;there is one in at 47th street Times Square (it's located under the red steps), but I prefer the one in downtown Brooklyn as there are fewer crowds and you have a greater chance of scoring the tickets you want (get there by taking the A, C, F, or R to Jay Street-MetroTech and then walk to the corner of Jay Street and Myrthe Avenue). You can also see exhibits from the Evita Museum in Argentina, which are on display through September 28 at the Argentinian Consulate in New York (12 W. 56th St. between 5th and 6th Aves, cnyor.mrecic.gov.ar, open 10 A.M.-5 P.M. Mon-Fri). I strongly recommend it for anyone who is even remotely interested in Evita's legacy&mdash;it's free and there are at least 50 works on display, including paintings, photographs, and articles of Eva's clothing. Look for the portrait by Tiziano Fabris on the second floor (shown here)&mdash;it was painted on parquet flooring from one of the houses that Eva helped to build for the poor of Argentina. Heading to Argentina this year? Michael Luongo wrote a fantastic article in the New York Times this March detailing the best places to follow in Eva's footsteps in Buenos Aires. SEE MORE FROM BUDGET TRAVEL: 13 Vacation Rental Sites Tailored to Your Tastes Amtrak Makes a Comeback 11 Spectacular Vacations You Should Book Right Now 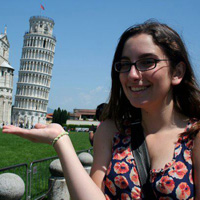 In Defense of Tacky Tourist Photos

There are two types of people in the world: those who can walk by a life&ndash;like statue of a pirate without taking a goofy picture with it, and those who can't. I decidedly fall in the latter category, whether it's a six&ndash;foot tall statue of an Italian pizza&ndash;maker with a crazy mustache in New York City's West Village or a life&ndash;sized replica statue of Fidel Castro standing in front of a cigar store in Cozumel. In fact, silly tourist photos are one of my favorite parts of the whole trip. And don't get me started on the leaning tower of Pisa. When my family traveled through Italy this summer working our way from Venice to Rome, we knew we had to stop by Pisa and take an iconic silly photo or two (or ten) of us trying to hold up the leaning tower. It was my father's first trip to Europe, let alone Italy, and he said he'd always wanted to do that since he was a kid, so we made time one afternoon as we traveled from the Cinque Terre area to Florence. From the Pisa Centrale train station, it's a leisurely 20 to 30 minute walk through Pisa and over the scenic Ponte Solferino bridge to the Campo dei Miracoli, a beautiful Piazza home to the Pisa Cathedral, Baptistry, and of course, the leaning tower. When we entered the Piazza, it was packed! You would not believe how many people probably just stopped by for a silly photo opportunity&mdash;us included. We quickly noticed that the side farthest away from the Tower was the most crowded because it was the best angle if you want to get that perfect shot of holding up the tower or, like we spotted some tourists doing, pushing it over. It was hilarious seeing the lengths some people would go to for the perfect angle&mdash;some climbed steps and poles to elevate themselves, others lay on the ground and held it up with their feet. What about you? Has the opportunity for the perfect silly travel photo ever crossed your path, leaving you helpless to resist it? It's not just us, I promise&mdash;check out this blog post I wrote last year about an entire website dedicated to those who appreciate and strive to take the world's tackiest tourist photos. MORE FROM BUDGET TRAVEL 25 Most Photographed Places on Earth 4 Tips for Tough Photo Scenarios 33 Most Beautiful Places In America 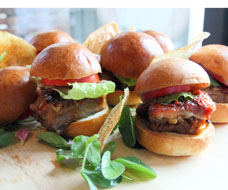 A New Kind of Culinary Treasure in Toronto

Toronto's new breed of chef is sticking close to home, calling on centuries of Canadian culinary tradition. Take a cross-country trip&mdash;from the seafood shacks of Nova Scotia to the prairies of Alberta&mdash;without ever leaving the table. Acadia Those Cajuns didn't always live in the bayou. French-speaking settlers (Acadians) actually lived on the rocky shores of maritime Canada before they were expelled in 1755 by the British. Chef Matt Blondin invites them back above the border: His dishes dress North Atlantic seafood (like Yarmouth albacore or Northmberland Strait scallops) in the soulful flavors of the South (pickled watermelon rinds, chicken cracklings, and blackening spices). 50c Clinton St., acadiarestaurant.com, albacore $23 Bannock Named for a Scottish flat-bread that was adopted by indigenous people and settlers during 18th century fur trading days, Bannock opened last year in the flagship store of The Bay, retail brand of the Hudson's Bay Co. With a menu of comfort classics, the spot almost requires Canadian citizenship to catch all its nostalgic references. St.-Canut pulled pork tourtiere (meat pie), for instance, comes with a packet of Heinz ketchup, just like you'd find it in Quebec. 401 Bay St., oliverbonacini.com/bannock.aspx , tourtiere $16 Chantecler This "progressive Canadian" bistro takes its name from one of the nation's two heritage hen breeds. The bird shows up in Chef Jonathan Poon's signature consumme: More ph-like gem than sick-day snack, it's served with smoked breast and, appropriately, hen-of-the-woods mushrooms. Like the the multicultural city itself, the menu draws freely on Italian and Asian flavors. Gnocchi, for example, is topped with cod roe and red seaweed, harvested in New Brunswick. 1320 Queen St. W., restaurantchantecler.ca, gnocchi $13. Keriwa Café There's something exciting about a menu written all in English that still contains so many items you've never seen before: sea buckthorn, miner's lettuce, Saskatoon berries. Chef Aaron Joseph Bear Robe's "aboriginal-inspired" food pays homage to his youth in Alberta's Siksika Nation. Look for lots of rustic produce and that quintessential Great Plains protein-bison&mdash;in dishes like braised tail or tongue pemmican, a twist on a native Blackfoot staple. 1690 Queen St. W., keriwacafe.ca, bison tongue pemmican $15 SEE MORE FROM BUDGET TRAVEL: 10 Places You Would Rather Be on a Wednesday 15 Things You Didn't Know About Oktoberfest Airline Tweaks Baggage Policy After Too Many Complaints 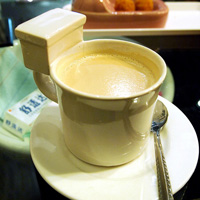 Eccentric Eateries Around the World

In 2010, BT compiled a list of the eight wildest and wackiest restaurants around the globe&mdash;from a Taiwanese eatery that swaps chairs for toilets to a NYC spot where ninjas descend on diners spontaneously through the evening. We had a tough time imagining the restaurant world outdoing itself&mdash;but then we got a look at Cheapflight.com's ranking of the Top 10 Weirdest Restaurants in the world. Some of our picks caught their eye as well&mdash;the aforementioned Modern Toilet in Taipei, as well as franchise Dinner in the Sky (your meal is served over 160 feet high&mdash;al fresco, mind you&mdash;after being lifted with you into the air via crane), Volterra, Italy's Fortezza Medicea (where Tuscan fare is prepared and served by former convicts&mdash;then eaten alongside armed guards; + 39 058-886-099), and Ithaa, a gourmet restaurant located in an underwater tunnel 16 feet below sea level at the Conrad Maldives Rangali Island. But six other eateries are doing their part to raise the bizarre bar: Los Angeles&ndash;based Opaque features a pitch&ndash;black dining room and staff with visual impairments. Guests have raved about a heightened ability to taste Opaque's cuisine. Chongqing, China's A380 (+86 23 6753 6117) is likely to earn a few new fans on a travel blog. The interior is a replica of an Superjumbo airbus, with flight&ndash;attendant servers and airplane tray place settings. Haijime Robot Restaurant in Bangkok is staffed by&mdash;you guessed it&mdash;robots. But these aren't just any robots&mdash;the million&ndash;dollar, state&ndash;of&ndash;the&ndash;art androids bus and serve tables, take orders, and even bust a move now and then. No robot chefs yet&mdash;but we're sure they're working on it. Clink, found in Boston's Liberty Hotel, doesn't try to hide the fact that it's housed in a former jail&mdash;the bar is even called the Alibi. But instead of gruel, you'll find fresh, quality seafood interpreted in creative plates. Nuremberg, Germany is home to 's Baggers, a space&ndash;age, waiter&ndash;free experience outfitted with touch&ndash;screens, chutes, and conveyer belts that bring your schnitzel to you. The main course at Disaster Café (+ 972 36 02 50), located in Llloret del Mar, Spain? A simulated 7.8&ndash;magnitude earthquake. For an appetizer (or a milder alternative), diners can opt for the extraterrestrial dining room located upstairs. MORE FROM BUDGET TRAVEL 12 Restaurants With Spectacular Views World's Weirdest Hotels A Few Appetizing Food Museums