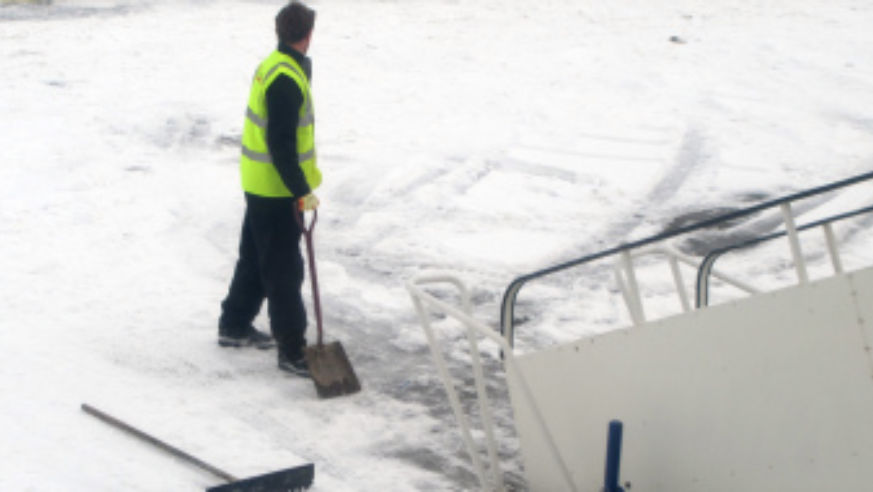 Sean O'Neill
He'll have the runway cleared in no time.

Anyone who says it's about the journey, not just the destination, has never stood at an airport gate and learned that their flight is canceled. Last month, the US Government Accountability Office (GAO) released a report about whether airlines are canceling more flights now than before. The answer: Yes.

The GAO findings: Cancellations have been becoming more frequent. Last summer, flights parked at the gate were 24 percent more likely to be canceled than during the previous summer. Even worse, flights stuck on the tarmac for about one hour were 31 percent more likely to be canceled. Airlines usually blame the weather because bad weather is a "get out of jail free" card for the airlines: government regulation allows them to do pretty much whatever they want with a passenger if the weather goes bad—or the airline claims that the weather goes bad.

That said, only one out of every 100 flights gets canceled, on average, according to the Department of Transportation. Yet if you're in that one percent, you're out of luck, because most flights are fully booked these days: It can take a long time for an airline to find an open seat for you on another flight and rebook you.

So, how do you avoid getting stuck on a flight that will get canceled? Some guidelines:

•When shopping for flights, compare the on-time arrival statistics for the flights you're considering. If your online travel agency or airline website doesn't reveal that information, you can look it up flight by flight at FlightStats. Say you're planning to take American (AA) flight 1012 from Miami to Washington, D.C.,'s Reagan National Airport and want to see how often it is delayed. Punch in the airline and flight number, and voilà—flight 1012 was delayed last year an average of half the time and canceled 3 percent of the time (much higher than the industry average of 1 percent). Be willing to pay a little more for a flight with a better track record. Think of it as an insurance premium for a stress-free trip.

• The best time to fly domestically is nine in the morning. Because morning flights are less likely to be delayed or canceled than later ones, because you miss rush hour, and because you don't have to wake up before your dog needs walking.

• Avoid flights at "feeder" airports. In Budget Travel's experience, major US airlines tend to cancel flights from smaller airports, such as Albany, NY, that head into major hubs, such as Newark, when they have had a backlog of flights at the major hub.

• The best time to fly internationally is several hours before your departure airport closes for the night. Flying to Europe? Try and catch a flight leaving the US at 6 in the evening instead of at 10 in the evening. Because late night flights are more likely to be delayed than earlier ones. The reason: Some airports stop flying after a certain hour to lower the noise volume for local residents.

• Be on a full flight with lots of business-class passengers instead of a half-empty flight with mostly economy-class passengers. True, this tip isn't all that helpful if you don't know much information about the route you're flying. Here's why this information matters: A doctoral student at the University of California at Berkeley, Jing Xiong, studied 8,269 delayed domestic flights and found that half-empty flights are much more likely to be canceled during foul weather than full flights. Your flight is even more likely to be canceled during a storm if you have fewer business class passengers on board than other planes at the gate do. If poor weather forces an airline to choose between flying two different planes, it will typically choose the one with bigger spending passengers.

Despite following all the above strategies, your flight may still be canceled. (As the saying goes, "If I didn't have bad luck, I wouldn't have any luck at all.") What do you do then?

• Travelers with only carry-on bags will be rebooked more quickly. Don't check a bag if you want to be able to switch flights at the last minute. Because trying to get your bag off one plane and onto another is a hassle for the airline.

• Be ready to call your airline. Savvy travelers know to program into their cell phone the toll-free number for their airline before their trip. (Traveling overseas? Know that you may not be able to dial a US-based toll free number, such as a 800 or 888 number, from a cell phone overseas and will need to know the special number the airline has for international callers.) Then, when you find out your flight is canceled jump into line for rebooking but also whip out your cell phone and call customer service for quick alternatives on other airlines. If all goes to well, you'll reach someone on the phone who isn't facing an angry mob and can rebook you before anyone else.

• Insist on same-day standby. If your flight is cancelled, and you're told you can be booked on the same flight the next day, ask to be put on the standby list—even if you're told they're full for the rest of the flights that day.

• Flying in Europe? Be sure to collect your full benefits if your flight is canceled from meals to phone calls to lodging. Last week, the European Union fattened the amount of compensation that airline passengers are entitled to as compensation for canceled flights to include taxi rides and housing their pets in kennels.

• Stay polite. Outrage will get you nowhere when it comes to coping with cancellations.

Have any thoughts on canceled flights and lessons learned the hard way? Share them in the comments. If we learn tips from each other, we will someday truly be able to say with a smile, "it's about the journey, not just the destination."