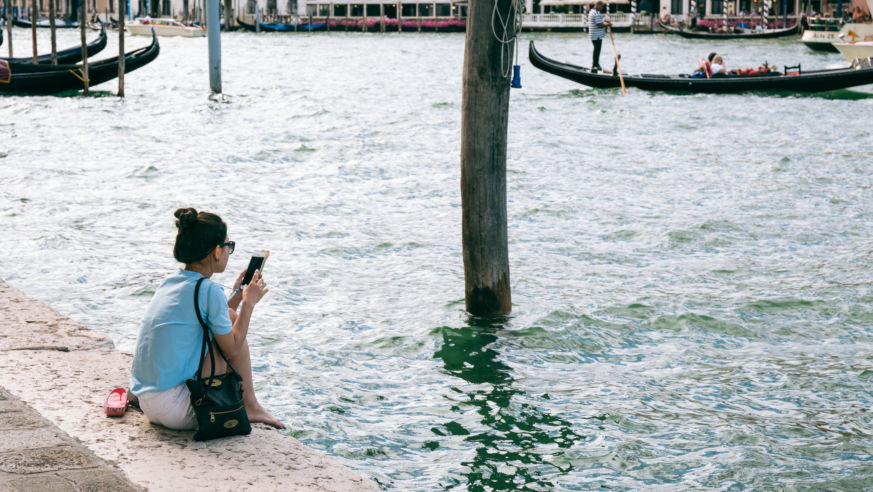 It's easy to rack up huge data charges when you take your mobile phone overseas. The good news? It's just as easy to keep costs down.

You probably know someone who has returned from overseas with a horror story about a crazy-big—and utterly unexpected—mobile phone or tablet bill. In some cases people have been socked with five-figure tabs for using currency conversion apps, digital postcards, and even humdrum data like texts and emails. And that unlimited data plan you've got in the U.S. won't work once you cross international borders. But we've got some easy, affordable ways to be super-smart about using that smartphone.

Limit your data downloads by opting for Wi-Fi only. By turning off roaming or selecting airplane mode, you'll have to go to a Wi-Fi hotspot to access the Web.

Turn off apps and automatic updates

This can be a big one, since that slim little phone in your pocket may be sucking down data even when you're not using it. Turn off automatic email updates (that way you'll be able to check email yourself using Wi-Fi when you're at a hotspot), voicemail (to avoid getting hit with charges for incoming phone calls even when you don't answer them!), and apps (which can continue updating and devouring data 24/7).

Instead of wasting time looking for a wired Burger King in, say, Gdansk, rent a mobile bubble. Weekly rates vary—Tep Wireless in the U.K. will charge less than $40 plus a daily $2 for unlimited wireless; Rentaphone Japan charges about $75 per week, including unlimited use and delivery to your hotel.

Get an international plan through your U.S. carrier

Whether you're combining business with pleasure or are simply hooked on your phone, there are some scenarios where you just know you're going to need your email, texting, and apps. In those cases it's a good idea to ask your U.S. carrier about their international plan that will resemble a domestic data plan. But just as you would at home, be sure you understand the limits of your data downloading, phone minutes, and any changes in the plan for business hours, evenings, and weekends.

Set your phone's data tracker to zero at the beginning of your trip so you can keep track of how much data you are using. Especially if you sign up for an international data plan and you're concerned about staying within a set limit (say, 50MB per month), the tracker will quickly become your wallet's BFF as you see those MBs slowly rise.

Your U.S. mobile phone is likely "locked," meaning it will work only with the service you signed up for. But it's possible to ask your company to unlock your phone (usually by selling you a code). Once the phone is unlocked you can install a SIM card for the country you are planning to visit, including prepaid minutes. It's also possible to purchase or rent an unlocked phone, and there are SIM cards that can roam from country to country without an interruption in service.

No, it's not going to be especially smart or social, and it won't understand a word you say to it, but if you just want to be able to make calls without sweating the rates, sink about $75 or less into a local disposable mobile phone with a set number of prepaid minutes.

While using Wi-Fi instead of 3G and 4G will help conserve battery power, it's still a challenge to keep your phone charged on the go. It's not a new idea, but we'd be remiss if we didn't remind you to turn down the brightness of your phone or tablet's screen—it is the single biggest consumer of battery power.