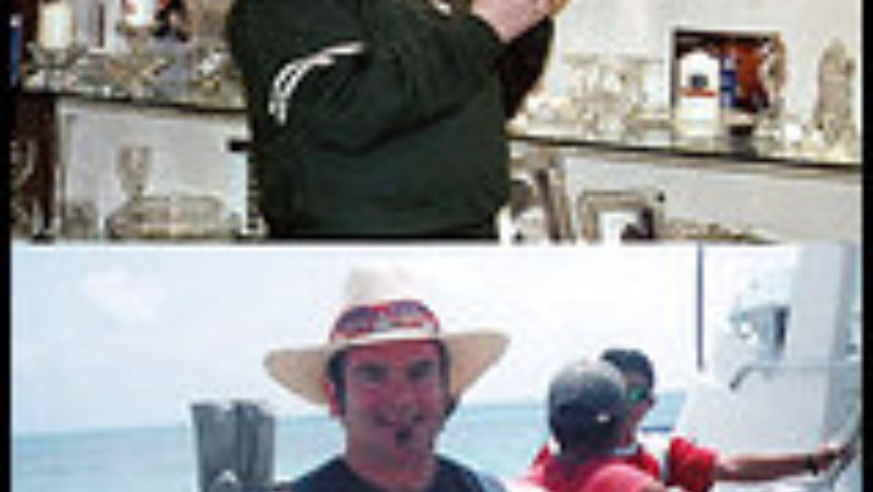 Karen M. Hughes (top) splurged on a new Waterford bowl, while Andy Pappalardo spent his $100 on a fishing excursion

We picked five lucky winners who felt the urge to splurge

Back in March we asked you how you'd spend $100 of our money during an upcoming trip. Over 500 e-mails later, we picked five lucky winners (one of whom we featured in the June issue) who all felt the urge to splurge.

"My dear friend and I are going to a concert in Orlando and I'd love to have a momento from our girl's night out," wrote Julie Lowery of Wray, Georgia. Along with her friend Tiffany, she headed to the House of the Blues where they watched pop artist James Blunt perform. After the show, they bought a concert T-shirt, CD, and poster--plus two margaritas--with the $100 we gave her. "Not only did we spend much needed time doing something fun and frivolous, but we got to buy some great keepsakes," she wrote. "We had an absolute blast!"

"After returning from my first trip to Ireland, I placed a Waterford bowl on my coffee table for all to admire. About a month after my return, my cat went crazy and knocked my prized bowl onto the floor shattering it into a million pieces. When I read about Budget Travel's contest with my next trip to Ireland only three weeks away, I knew that I would spend it on replacement Waterford bowl. The bowl was my perfect splurge--and yes, I still have the cat!" --Karen M. Hughes, Cantonment, Fla.

"A wine tasting in Paris courtesy of Budget Travel? What's not to like about that? I sampled three whites and four reds, ranging from lightest to fullest. My personal favorite was the Bergerac-Chateau la Robertie 2003, a merlot cabernet sauvignon blend. And this was a true tasting: it included silver buckets to empty the remainder from your glass; you were expected not to drink it all. And so I didn't, except for the Bergerac! Altogether it was a very satisfying and authentically French-feeling splurge." --Sheila Ruof, Laredo, Tex.

"As an avid fisherman, I was excited to spend my $100 on a half-day fishing excursion in Cancun, Mexico. Just as the captain guaranteed, everyone onboard hooked a fish--my friend caught two Mahi Mahi while yours truly caught a Red Snapper and a Queen Triggerfish. The crew was very professional and a great time was had by all." --Andy Pappalardo, Thunder Bay, Ontario