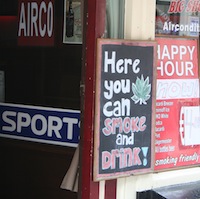 Amsterdam is beloved for its canals, houseboats, museums, bikes, pancakes, and yes, for its cannabis. But a government plan to prohibit foreigners from buying marijuana in the Netherlands could put a damper on tourists' high.

The government has proposed a plan that would only allow Dutch residents, not foreigners, to purchase marijuana, The Associated Press reported.

The new regulations go into effect in the south of the country on May 1 and are scheduled to be enacted nationwide on Jan. 1, 2013. It's still unclear how and whether the regulations would impact the famed coffeeshops of Amsterdam.

"The national government would like to introduce a national membership card system for coffeeshops in the Netherlands [that] would effectively ban tourists from visiting coffeeshops and purchasing soft drugs," the City of Amsterdam and the Amsterdam Tourism & Convention Board explained on their joint website. "Under the new scheme, only Dutch residents of legal age would be eligible for a membership card."

"The City of Amsterdam has concerns about these plans, and recently commissioned research into the potential impact of the so-called 'weed pass,'" the site stated.

The City of Amsterdam has been working to convince the government that the 'weed pass' initiative would be counterproductive.

"If tourists are denied access to coffeeshops, illegal sales and drug dealing on the streets of Amsterdam will increase," the City of Amsterdam has argued. "The City of Amsterdam does not want to facilitate soft drug use by tourists, but to help those who wish to use drugs to do so as responsibly as possible."

The City of Amsterdam reported that 23% of tourists visit a coffeeshop during their stay in the city.

The Dutch Cabinet decided on the regulation to restrict cannabis consumption by foreigners last year as part of an effort to put a cap on drug tourism — visitors who come to the country solely to purchase and consume cannabis. On Wednesday, Dutch coffee shop owners went to court in a last ditch effort to block the government plan, AP reported. A ruling is expected on April 27. Stay tuned, stoners.

Like Everyone Else, Airlines Are Feeling Pain At The Pump

United Passengers: How Long Have You Been On Hold?

Like Everyone Else, Airlines Are Feeling Pain At The Pump

A couple months ago, we theorized that high gas prices would put an end to the summer road trip. But it's not just car owners that are worried about summer travel. What if you had to fill the tank on a 220,000-pound 757? And then fly it over the country? According to an article in USA Today, Southwest Airlines lost $18 million in the first quarter, while American Airlines' parent company reported a loss of $1.7 billion. Yes, other factors come into play, but rising fuel prices are a significant factor in the losses (even with higher revenue from ticket sales). The company reported that $325 million was spent on fuel in the beginning of 2012, a 17.6% increase over the same time last year. It's should not come as a surprise, then, that airfare for summer 2012 is expected to keep inching up and up. As Rick Seaney, the CEO of FareCompare.com, advised last month, don't wait to book. Chances are, that flight isn't going to get any cheaper. MORE FROM BUDGET TRAVEL Top 10 TSA Checkpoint Freakouts, Humiliations, and Confrontations Do You Embrace Technology When You Travel? Planning a Quick Getaway? Don't Make These Common Mistakes

Here's a look back at some odd, ugly, infamous, occasionally nude face-offs between airline passengers and TSA security officials. Voluntary Public Nudity, Part I In early April, an apparently disturbed woman removed all of her clothing in full view of airline passengers and workers at Denver's airport. The woman, who was smoking, was asked by airport workers to put out her cigarette. She responded by taking off all of her clothes, and the only explanation offered to quick-to-appear police officers was that she was exhausted from a lack of sleep the night before. Voluntary Public Nudity, Part II Just this week, a man got naked at Portland's airport, though he has a better reason for going au naturel than a poor night's sleep: He was protesting what he categorized as harassment by TSA security workers. 85-Year-Old Grandma's Very Involuntary Strip Search Toward the end of 2011, news broke regarding the treatment of an elderly woman's treatment by security at New York's JFK airport. The 4-foot, 11-inch 85-year-old grandmother, who needs a walker to get around, claims that she was forced to remove her pants and show her colostomy bag during a humiliating strip search. Sen. Rand Paul's Showdown in Nashville In January, the U.S. Senator from Kentucky missed his flight out of Nashville when he was escorted out of the screening area by security officials because the body scanner alarm went off and Paul refused to go through a pat-down. Cancer Survivor Forced to Remove Prosthetic Breast In Charlotte in 2010, a cancer survivor who had worked as a flight attendant for over three decades, was forced to remove her prosthetic breast from her bra during a pat-down that she described as "aggressive." Pat Down of 3-Year-Old in a Wheelchair On his way to Orlando to visit Disney World, a 3-year-old boy in a wheelchair was subjected to a pat-down by security officials at Chicago's O'Hare airport last month. While trying to remain calm and reassure his son, the boy's father recorded the pat-down and later posted the video on YouTube. Anger and Humiliation in Raleigh-Durham Among the travelers upset with pat-downs at the Raleigh-Durhman airport in 2010 was a retired Army officer who filed a complaint after being groped around his genitals. A TSA worker explained that the pat-down was being conducted because "there was something suspicious hanging from between" the man's legs, to which he responded, "that something suspicious was my [genitals], you dummy." "Don't Grab My Junk, Bro" In 2010, a 31-year-old software programmer named John Tyner secretly recorded his pat-down at San Diego's airport, during which Tyner criticized the process and famously said, "Don't grab my junk, bro," to the TSA worker responsible for the physical pat-down. Tyner, who also is heard saying, "I don’t understand how a sexual assault can be made a condition of my flying," posted the video on his blog, and it quickly went viral. The Phoenix Freakout A woman went ballistic after a TSA workers reportedly grabbed her breasts during an inspection at the Phoenix airport. A video of the event, which occurred on New Year's Eve of 2010, made its way to YouTube. The No-ID Confrontation in Albuquerque In January of 2011, a Seattle man was acquitted of all charges related to a confrontation with Albuquerque airport security, in which the many refused to show ID and insisted on videotaping the showdown with his cell phone. On the video, the man is heard saying, "I know my rights!" Apparently, he did indeed. MORE FROM BUDGET TRAVEL: 4 Most Controversial Blog Posts of 2012 (So Far) The Tweet That Got Two Tourists Barred from the U.S. Busted for Bringing Cupcakes and Bagels Through TSA Checkpoints?

Are You Traveling Carbon Neutral?

Hotels for every budget are implementing carbon&ndash;neutral policies, from the luxe Leading Hotels of the World to budgetplaces.com, a booking engine offering hotels world&ndash;wide starting around $30 for a double room. The site gives travelers the option to make their stay carbon neutral for about 65 cents per person per night, and you can choose which project to fund, including wind farms and solar plants. Airlines are getting in on the action, too. Costa Rica's Nature Air bills itself as the world's first carbon&ndash;neutral airline, and the company purchases carbon offsets for every gallon of fuel burned, and flies fuel&ndash;efficient turbo props. Richard Branson and his Virgin fleet have been at the forefront of carbon offset and alternative fuel research. Travelers flying Virgin America can offset their flights through carbonfund.org for just a few dollars. For example, a New York to San Francisco flight is $10 to offset, roundtrip. Want to figure out just how much carbon that flight used? Native Energy has a travel carbon calculator. We were shocked to learn that a flight from New York to London generates four tons of CO2! The money goes to fund projects like wind farms in Iowa and projects to collect methane gas from landfills. Is it important to you to offset your travels? Let us know in the comments! MORE FROM BUDGET TRAVEL 5 Eco&ndash;friendly Packing Tips 10 Most Sacred Spots on Earth Confessions of a National Park Ranger

E-book vs. Print: Which Do You Prefer on Vacation?

In April 2010, a cartoon in The New Yorker magazine made me laugh&mdash;it showed an airplane preparing for takeoff. One of the flight attendants asked folks to please "turn off their books." Almost exactly one year later, in May 2011, e-book sales surpassed print sales at Amazon.com (on a related note, the Kindle is their best-selling item of all time). Enter April 2012 and the price of an e-book is the focus of an anti-trust lawsuit and the Pew Research Center just revealed that the percentage of people who own an e-reader nearly doubled this holiday season. Clearly, e-books are on the rise. That said, the printed word still accounts for 74 percent of the market according to the Pew Research study. if (WIDGETBOX) WIDGETBOX.renderWidget('5376c3ad-57de-42d4-9136-61ac3355f38b'); Get the Poll Creator Pro widget and many other great free widgets at Widgetbox! Not seeing a widget? (More info) As the Deputy Digital Editor for Budget Travel, you might think that I was an early adopter of the e-book, but that isn't true. I like everything about printed books&mdash;the way they look, the way they smell, the sound the pages make as you turn them, the fact that you don't have to power them "on" when you want to use them, "off" when you're done with them. I didn't think I needed an e-reader&mdash;until I had one. Now I can't put it down. I love the device for all of the reasons everyone else tells me they love it: you can carry hundreds of books with you! You can download books for free! You can save magazine and newspaper articles! As a frequent traveler, this is especially meaningful to me (my carry-on is so much lighter). Plus, there are all of those handy apps you can download and access on the road. That's me, but I know that there are still plenty of folks who would never dream of giving up their books in favor of an e-reader. So here is my question to you&mdash;how many of you use an e-book reader on vacation? If you use one, which one do you use? Vote in our poll or tell us below. SEE MORE FROM BUDGET TRAVEL: 10 Most Sacred Spots on Earth 15 International Food Etiquette Rules That Might Surprise You 30 Hotel Chains Every Traveler Should Know