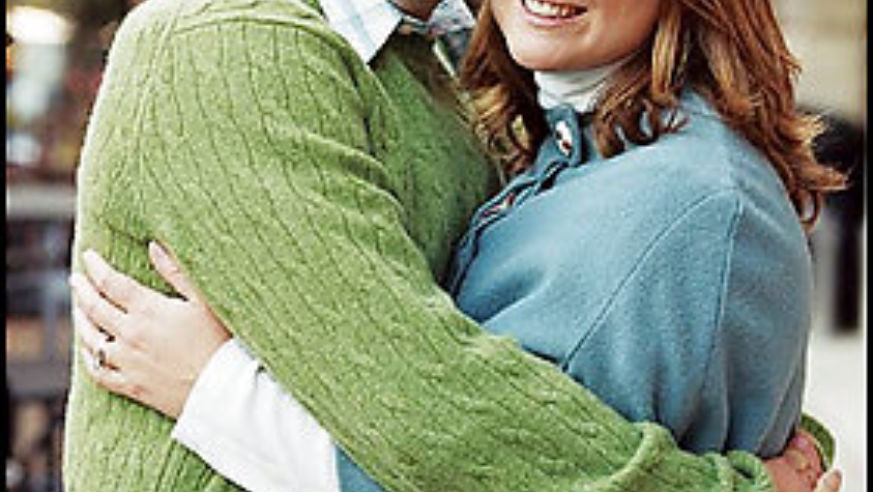 After attending a friend's wedding in Delhi, a couple wants to see elephants and tigers--and maybe stay in a tree house.

Max and Courtney Kieba first met in southern New Jersey at a high school roller-skating outing, which ended with a friendly parking-lot snowball fight. The couple began dating soon thereafter, and stayed together through college--Max at the University of Pennsylvania, Courtney at the University of Rhode Island. Married in 2002, the Kiebas live in Chicago, where Max is an electrical engineer and Courtney is in charge of marketing for an animal humane society.

"My ancestry from the Ukraine gives me certain ties to Europe that always interest me," says Max, who toured Europe as a member of the Penn Glee Club. Courtney moved to London after college, and for her 22nd birthday, Max met her in Ireland, where they B&B-hopped. "After traveling in Europe, we started getting more curious about exotic places," says Max. "We're also interested in breaking the stereotypes you can get when you see places through the eyes of the U.S. media." On their most recent trip, the Kiebas rode camels and visited mosques in Morocco.

"India wasn't next on our list," says Courtney. "But we couldn't pass up the opportunity to attend a close friend's wedding in Delhi." Amol Dixit, a college buddy of Max's, is getting married in December. The Kiebas have a little less than two weeks in India, including five days at the wedding.

They don't need much help in Delhi: The wedding party has arranged lodging, activities, and sightseeing for guests. But Courtney wants to wear a sari to the wedding and to buy gifts for folks back home. There's a fantastic selection of reasonably priced fabrics at Kalpana, in New Delhi's arcaded Connaught Place, which has been a shopping district since the days of the British raj. Dilli Haat, an outdoor market just a two-minute drive from the Kiebas' hotel, offers a one-of-a-kind shopping experience, with a roster of vendors that changes regularly according to theme (which often involves clothing).

Max asks about eating at street carts: "How does [The Travel Channel's] Anthony Bourdain make it look okay--or at least live to tell about it?" We're not sure; eating street food in India is not a good idea. A safer alternative, Karim's, is an open-air institution in Old Delhi. The tender, well-spiced mutton and kebabs have a dedicated fan base.

Max and Courtney are joining friends on a four-hour drive to the famed Taj Mahal in Agra, and want a recommendation for lunch. The veranda off the bar at the Oberoi Amarvilas, an upscale hotel with a dazzling Moorish design, overlooks the Taj, and the Bellevue restaurant upstairs is outstanding.

We suggest making it an extra-long day with visits to two lesser-known attractions. Itmad-ud-Daulah, two miles north of the Taj Mahal, is an ornate tomb set up on a platform in a garden; it looks like a mini Taj built of red sandstone and marble and encrusted with semiprecious stones. Another worthwhile stop is Fatehpur Sikri, a World Heritage Site 25 miles west of Agra. The capital of the Mughal Empire for a spell in the 16th century, the city today is a ghost town of courtyards, red-sandstone dwellings, and carved pavilions, all enclosed by four miles of high walls.

"We were all about seeing camels in Morocco," says Max. "In India, we'd like to spot some tigers and elephants." The Kiebas hear that there are tigers at Ranthambore National Park in the state of Rajasthan. But Rajasthan's landscapes are mostly deserts, and the Kiebas decide it'll look too similar to Morocco.

"We're both pretty laid-back travelers," says Courtney, mentioning that she'd love to practice yoga in India and mix "the fast pace of the larger cities with the relaxation found off the beaten track." We steer them to the southern state of Kerala. Northern Kerala is largely rural, the south is full of beach resorts, and the inland hills host tea and spice plantations. Hotels throughout Kerala offer yoga classes and ayurvedic treatments, so Courtney can get her fix.

After we mention Green Magic Nature Resort, the Kiebas are completely sold on Kerala. Guests stay in an ecolodge or one of two tree houses 90 feet above the forest floor. Tree house rooms are accessible by suspension bridges and an elevator-like crane counterweighted with water. There's not much to do at the resort except relax and watch monkeys play and butterflies drift in the air.

Green Magic maintains its charm partly because it's so remote. Visitors either fly to Kozhikode (Calicut), in central Kerala, or take a five-hour train from the city of Kochi (Cochin). One-way Indian Airlines flights from Delhi to Kozhikode cost $365 on the day we check, which Max and Courtney agree to pay to save time. We tell them to book their tickets via an India specialist like Hari World Travels, because flight times often change and it's necessary to confirm all flights several days in advance, which a travel agent will do.

Following a few days at Green Magic, the Kiebas are heading south to Kochi, known as the Venice of India for its network of waterways, or backwaters. The Kiebas can either ride a five-hour train ($25 in first class) or grab a half-hour flight on Indian Airlines or Air India (about $85). Booking trains online is complicated, as it's necessary to know the train and station numbers, and there's no easy way to figure these out. We strongly recommend buying train tickets in advance through a travel agent.

"A coworker who travels to India a lot mentioned catching a Kathakali show," says Max. In the traditional dance-dramas, elaborately masked performers act out choreographed epics. The See India Foundation includes an English-language synopsis with its performance, and patrons can come 45 minutes before showtime to watch the actors put on their makeup and costumes.

To tour the backwaters, many visitors drive south of Kochi to Alappuzha (Alleppey) and board a double-decker tourist boat. Max and Courtney are interested in getting exercise and going off the beaten path, however, so we urge them to take a half-day guided canoe trip with the Kerala Tourism Development Corporation (KTDC), right in Kochi. As for a cute, affordable place to stay in Kochi, we recommend a boutique hotel in the Fort Cochin district: Fort Heritage, a 17th-century Dutch mansion.

"We both love to cook, so we're excited for Indian cuisine," says Courtney. In Delhi, they'll probably eat plenty of Mughlai food, Muslim-style cooking that's heavy on spicy kebabs and creamy sauces. Kerala's cuisine centers on fish and coconut-infused dishes. The Fort House, an open-air restaurant in Fort Cochin, serves fantastic fried prawns, braised seer fish, fish baked in banana leaves, and other entrées that cost about $4 each. The excellent History Restaurant has a menu that covers the various ethnicities (Portuguese, Arabic, Jewish) that influenced Kochi during its days as a key trading port. For a homey experience, Nimmy Paul hosts cooking classes and meals with her family. "We really like this idea," says Courtney. "Mingling with fellow travelers should be fun, too."

In Morocco, the Kiebas bought a Berber rug, a small iron vase, and spices from the markets. "Courtney is the bigger shopper of the two of us, but we do like to come home with something unique," says Max. Tons of shops selling crafts line the old Jewish district. Crafters Antique, where local hoteliers buy their antiques, offers everything from wood carvings to tiles and brass jewelry boxes.

We warn the Kiebas that haggling is generally the norm in India. "We were a little uneasy at first haggling in Morocco, but we eventually got the hang of it," says Courtney. "At the same time, we also enjoy going to the flat-rate-price shops, at least for the sake of comparison." With that in mind, we steer them to the government-run Kairali for curios and handicrafts at decent fixed prices.

As if the Kiebas' itinerary weren't full enough, we offer up a final option before they fly back to Delhi for $210 on low-fare carrier Air Sahara. The Periyar Wildlife Sanctuary--home to some 40 tigers and 800 elephants--is six hours from Kochi. They could hire a private car for $100 a day or book the Periyar Tiger Trail package--transportation, guides, meals, and camping--from $545 for both of them via Tour India, the same company that reserves rooms at Green Magic resort.

"We had a fabulous time!" says Alyssa Henry, who we coached on a motorcycle ride through Europe with her husband, Jordan (they're pictured in Austria). "The food was fantastic, and we really enjoyed the BMW plant tour. Thanks so much!" "On our first walk," says Tammy Fine, who we coached on a hiking tour of Switzerland's Bernese Alps with her husband, Michael (left), "I remember saying, 'This is so beautiful, so perfect! Now if only we could see some cows.' No sooner were the words out of my mouth than five large cows came slogging up the path towards us, bells a-clanging."