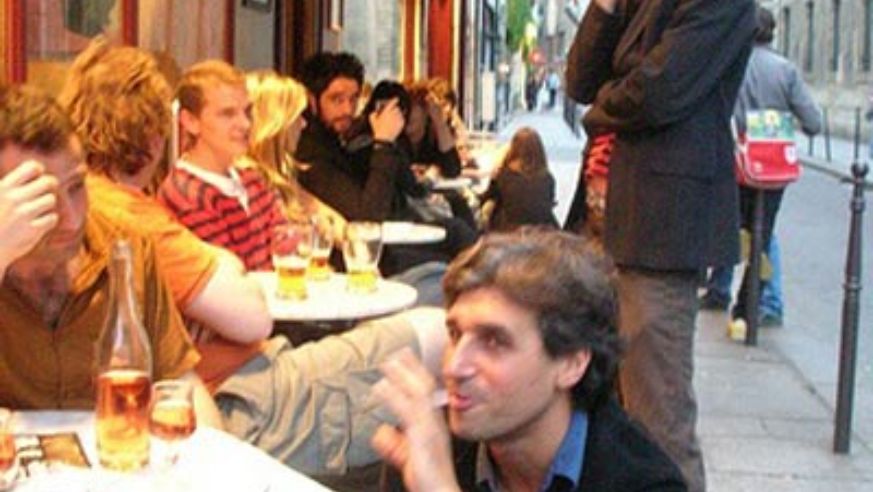 After a long, gray winter, it’s time again in Paris to enjoy le beau temps. Beautiful weather bestows so many outdoor possibilities—riding a bike, trekking across the city, taking the stairs to the top of the Eiffel Tower. It also affords the luxury of doing very little at all while sitting at a sidewalk café.

This activity, more than any artistic or architectural marvel, is what I most remember from my early visits to Paris. These little breaks between exhibitions, or in the hours before dinner, offered my first glimpse of "real" local life. Within tiny patches of sidewalk sun, Parisians and I were crowded into tables so close that I felt immediately part of their lives. I was mesmerized by their extravagant body language, complicated facial expressions, and even the way they smoked.

Years later, cigarettes have fallen by the wayside in French cafés, but the tradition of sitting, sipping, and staring lives on. There are sidewalk cafés on nearly every street, but a few of my favorite terrasses are below. These all have plenty of sun and superb people-watching potential.

On the Left Bank

Forget about the Café de Flore and Le Deux Magots. These famous cafés are today filled with tourists frowning into their over-priced drinks. La Palette is where the current generation of left-bank creatives are hanging out (43 rue de Seine, 6th arrondissment).

In the residential south, not far from the Catacombs, Café Daguerre has sunny tables on a pedestrian market street. This is a great place to observe the locals with hardly any other visitors around (4 Avenue du Général Leclerc, 14th arrondissement).

On the Right Bank

La Perle remains one of the best sidewalk scenes in town. Grab an outside table during the apéro hour—it's a prime perch for watching the nightly Marais fashion parade (78 rue Vieille du Temple, 3rd arrondissement).

Near Grands Boulevards, the tables of the Delaville Café are packed in the late afternoon with local media and theater types (34 boulevard Bonne-Nouvelle, 10th arrondissement). The interior is also worth checking out during your trip to the blinged-out bathroom.