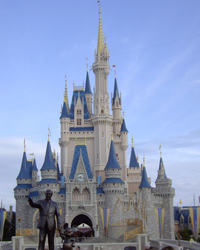 Walt Disney World and Universal Orlando both raised their single-day multi-park passes to a whopping $120 a day.

Disney World made the move first earlier this month, Universal followed suit, and the result is that a one-day adult pass (meaning 10 and up) at either of central Florida's largest theme park resorts is $85 to visit one park, or $120 for a pass allowing entrance to multiple parks.

Will people pay up? Well, some people certainly will. But more than anything, the goal of raising single-day passes to such exorbitant levels seems to be to make the discounts granted with multi-day passes look more enticing. The move especially makes sense for Disney, where the per-day admission price plummets the longer travelers hang around to hit the parks. As Theme Park Insider noted:

Once you've bought three days of theme park tickets at Disney, it costs just $9 to add a fourth day. Then it's just $8 to add each additional day beyond that, up to 10 days total.

The discounts obviously save money on admission, but travelers need to understand that the longer they're visiting Disney parks, the more they're likely to spend (and spend and spend) on Disney restaurants, lodging, character breakfasts, souvenirs, and the like.

In case you're wondering, SeaWorld Orlando admission is currently $72 for adults purchasing in advance online, and that includes entrance for a second day within a week of the first visit. (Granted, many people feel that one day at SeaWorld is enough.) Tickets for Legoland Florida, which opens in mid-October, are expected to be $65 for adults -- and unlike the other three parks, which charge adult rates for ages 10 and up, the "adult" cutoff at Legoland is 13. Visitors 12 and under pay $55.

Confessions Of... A Disney Cast Member

12 Things You Didn't Know About Orlando