Channel your inner Indiana Jones at the interactive Museo Archeologico Virtuale, which opened last summer just south of Naples. Instead of encased artifacts, MAV has 70-plus multimedia installations that recreate nearby Pompeii and Herculaneum in their heyday, before Vesuvius erupted in 79 A.D.

You do the discovering here: Your footsteps scatter virtual dust along the floor to expose intricate mosaics from Pompeii's House of the Faun, and your fingertips wipe away a misted glass to reveal a woman bathing after a visit to the caldarium.

The walls of a central room, CAVE, surround you with projections of a Roman home, from the kitchens to the gardens, as if you're a guest. Dangling in the air of another room are holograms of lavish jewels that villa owners had grabbed when fleeing the eruption. (The actual jewels, now in a Naples museum, were found on the beach of Herculaneum.)

Voices of such ancient inhabitants greet you with their stories, and the museum experience ends with a giant projection of Pompeii's Forum that gradually shifts from day to night, pre- and post-eruption. 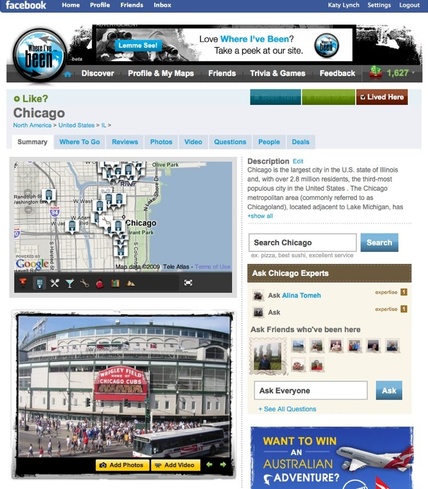 Friends don't let friends travel with bad advice, say the people behind Where I've Been, the social-networking tool that pinpoints the countries and cities where you've traveled, lived, and want to visit next. Today, Where I've Been is expanding to become more than just a way to brag: Based on where the friends in your network have gone, you can now click on various icons on the map to look up reviews of hotels, restaurants, bars, shops, and other attractions. Members can also post photos and videos. Since the Where I've Been platform is compatible with sites like Facebook, MySpace, Bebo, Friendster, and hi5, the idea is you're more likely to trust a user review if it comes from someone within your social network. "What we're trying to do is be that aggregating source," says CEO Michael Dalesandro. The Ask an Expert function lets you pose questions to just your friends or to the general Where I've Been community. The site also pulls info from third-party sites like Citysearch, Kayak, and Hotelvideoreviews.com, and uses TripIt.com as its online planning service. The company is also highlighting its Travel Bucks currency. The more things you do on the site, the more virtual dollars you can earn to trade in for philanthropic causes, such as donating to a rainforest preservation fund. Dalesandro says he envisions the Travel Bucks one day being valid for free trips. EARLIER TripIt launches a free iPhone app for travel planning MORE WAYS TO CONNECT Don't forget: You can also sign up for a free myBudgetTravel account on BudgetTravel.com, where you can create Travel Journals and share your photos and videos. If you sign up today, you'll be entered to win a trip to Ireland. 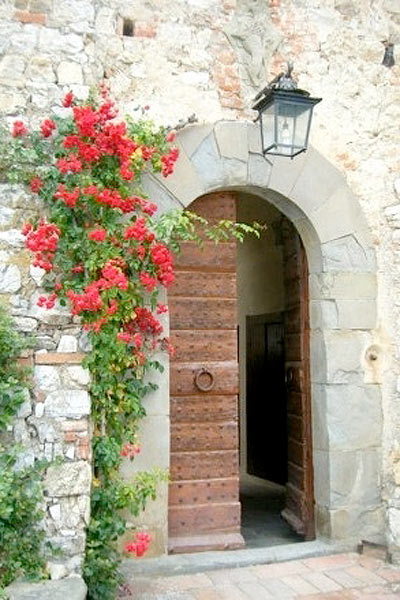 Looking for an Italy rental? Pick a good villa rental agency. Pauline Kenny of SlowEurope.com shares her tips. [Dream of Italy] Tourists have to try to combat the 'ugly American'. Fifty years after the book published, the perception of Americans as crass travelers remains. [cnn.com/travel] Obama seeks high-speed rail system across U.S.. The President wants new developments for high-speed trains in 10 corridors, including regions in New York, Illinois, California, and Florida. But it's not clear if enough money will be set aside to do more than make plans. [nytimes.com] Take the new Gossip Girl Tour of NYC. OMG! See 40 locations used in the filming of the high school soap. [gadling] Five in-flight movies to avoid now. The creepy, the weepy, and the sleepy that may be showing soon on a plane near you. [jaunted] For more travel blogs, go to Alltop's travel page. 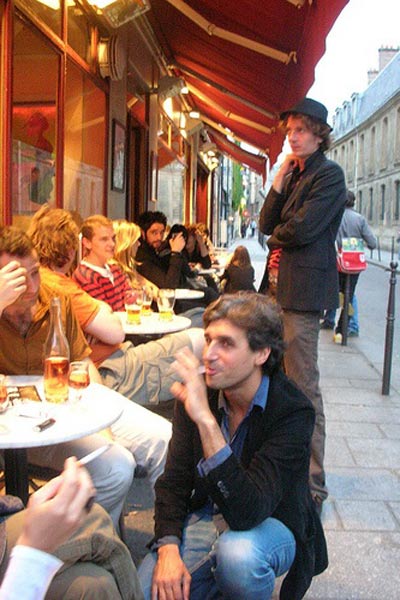 After a long, gray winter, it’s time again in Paris to enjoy le beau temps. Beautiful weather bestows so many outdoor possibilities&mdash;riding a bike, trekking across the city, taking the stairs to the top of the Eiffel Tower. It also affords the luxury of doing very little at all while sitting at a sidewalk caf&eacute;. This activity, more than any artistic or architectural marvel, is what I most remember from my early visits to Paris. These little breaks between exhibitions, or in the hours before dinner, offered my first glimpse of "real" local life. Within tiny patches of sidewalk sun, Parisians and I were crowded into tables so close that I felt immediately part of their lives. I was mesmerized by their extravagant body language, complicated facial expressions, and even the way they smoked. Years later, cigarettes have fallen by the wayside in French caf&eacute;s, but the tradition of sitting, sipping, and staring lives on. There are sidewalk caf&eacute;s on nearly every street, but a few of my favorite terrasses are below. These all have plenty of sun and superb people-watching potential. On the Left Bank Forget about the Caf&eacute; de Flore and Le Deux Magots. These famous caf&eacute;s are today filled with tourists frowning into their over-priced drinks. La Palette is where the current generation of left-bank creatives are hanging out (43 rue de Seine, 6th arrondissment). Further west near the Eiffel Tower, Le Caf&eacute; du March&eacute; offers some excellent people watching on one of the city’s most posh market streets (38 rue Cler, 7th arrondissement). In the residential south, not far from the Catacombs, Caf&eacute; Daguerre has sunny tables on a pedestrian market street. This is a great place to observe the locals with hardly any other visitors around (4 Avenue du G&eacute;n&eacute;ral Leclerc, 14th arrondissement). On the Right Bank La Perle remains one of the best sidewalk scenes in town. Grab an outside table during the ap&eacute;ro hour&mdash;it's a prime perch for watching the nightly Marais fashion parade (78 rue Vieille du Temple, 3rd arrondissement). Near Grands Boulevards, the tables of the Delaville Caf&eacute; are packed in the late afternoon with local media and theater types (34 boulevard Bonne-Nouvelle, 10th arrondissement). The interior is also worth checking out during your trip to the blinged-out bathroom. Chez Prune (36 rue Beaurepaire, 10th arrondissement) is a prime meeting spot along the Canal St-Martin, but I prefer its rival across the water. Le Jemmapes has only a handful of tables, but its takeaway cups let you sip your drinks along the sunny banks of the Canal (82 quai de Jemmapes, 10th arrondissement). Among the boutiques and galleries behind Bastille, Le Pause Caf&eacute; (41 rue de Charonne, 11th arrondissement) is an excellent spot for post-shopping recovery. Further east and not far from P&eacute;re Lachaise, Le Soleil is an appropriately named institution, drawing hundreds of Paris hipsters in sunny weather (136 boulevard de M&eacute;nilmontant). EARLIER Practical Paris: What's closed on Sundays, Mondays, and Tuesdays?

Making the most of your time in Paris requires a bit of scheduling prowess. That's because the city's most highly-prized tourist attractions&mdash;museums and restaurants&mdash;are closed on certain days of the week. So before setting off on a Sunday, Monday, or Tuesday, check to see if your 'to-dos' can in fact be done. Closed on Sunday A large number of restaurants are shuttered on Sunday. (Find the main exceptions listed in my earlier blog post "Sunday in Paris.") Shopping is also very limited&mdash;most magasins are closed outside of the historically Jewish Marais and the touristy Champs-Elys&eacute;es. Bakeries and markets are open in the morning but shut down around 1:00 p.m. The good news: The city's museums are all open, making this a great (if slightly crowded) day to get your culture fix. Closed on Monday A number of restaurants are also closed on Monday. Call to check and reserve before crossing town). The following museums are closed, too. Musee d'Orsay (Impressionists hung in a renovated train station) Mus&eacute;e Rodin ("The Thinker," and other statues) Mus&eacute;e du Quai Branly (a collection of artifacts, such as masks, totems, and fertility statues, from cultures all around the world) Fondation Cartier (contemporary art) Palais de Tokyo (more contemporary art) Maison Europ&eacute;enne de la Photographie(international photography since 1950) Fondation Henri Cartier Bresson (gallery of France's most famous photographer) Mus&eacute;e Carnavalet (city history) Closed on Tuesday Restaurants are rarely closed on Tuesday, but the following museums are: Mus&eacute;e du Louvre Centre Pompidou (contemporary art in the building that made architect Renzo Piano famous) Mus&eacute;e National de l'Orangerie (by the Tuileries gardens, built to house Monet's Water Lillies) Mus&eacute;e National du Moyen &Acirc;ge (Cluny) (the national museum of the middle ages) Maison Europ&eacute;enne de la Photographie (this museum is closed on Tuesdays, too) Mus&eacute;e Picasso (gallery of works mainly by the Spanish master) EARLIER "Sundays in Paris"