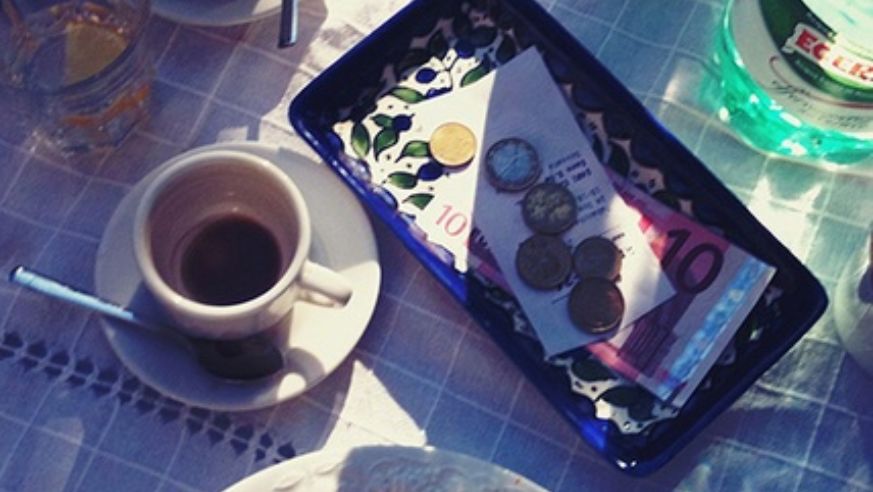 Stressing over the bill is no way to end a fantastic meal at a Roman trattoria. You'll have a smoother experience interacting with locals in restaurants, taxis, and hotels if you're familiar with Italian etiquette.

The most renowned book of manners, The Galateo, dates to the 16th century, but since they didn't have taxis back then, I consulted Sabrina Carollo's recent Galateo per tutte le occasioni (Etiquette for All Occasions) as a starting point. She recommends leaving a mancia (tip) for these customer-service professionals: theater ushers, porters, waiters, housekeeping staff, taxi drivers, and hairdressers.

At restaurants, Carollo suggests adding at least 10 to 15 percent to the bill, but that strikes me as very generous by typical Italian standards. I took an informal poll of Italian friends on Facebook and most commented that they tip waiters less—between 5 to 10 percent—or they simply don't tip period. This is mainly because they say that they are already charged a coperto, which covers expenses like the price of bread, cleaning linens, oil and other condiments, plus a servizio fee. The servizio, which goes towards paying the waitstaff, is often not listed on the bill at all but rather already factored into the price of your meal.

To investigate further, I called two of my favorite Roman restaurants: La Campana (011-39/06-687-5273, vicolo della Campana, 18) and La Taverna dei Fori Imperiali (011-39/066-798-643, via della Madonna dei Monti, 9) in Monti. I found that the servizio is actually not always included in the price of the meal and that some restaurant owners no longer charge a coperto. La Taverna dei Fori Imperiali, for example, said they do not charge either fee. Rather they charge for bread and leave tipping to "the discretion of their clients."

My Italian father-in-law, an all-around classy guy, says he keeps in mind how elegant or casual the place is, the age of who is serving you and also whether you are being served by the business owner, waiter or a waiter-in training. He feels a 10 percent gratuity is a more-than-generous tip for any meal. "Sometimes the generosity of the tip may also depend on the cash I take around," my father-in-law adds. "Since in almost every restaurant in Italy, it is impossible to tip by credit card."

In taxis, most Italians don't pay tips at all, unless they know the driver took you on the fastest route possible. In that case, if you are feeling generous, you just round the bill up and tell him to keep the change.

There are no hard-and-fast rules, but here are my personal recommendations for what to tip in 6 scenarios.

• Taxi: Round the bill up, if you're feeling generous and the taxi driver took the short route

And remember that it is perfectly okay to abstain, if you are not happy with the service provided—waiters are paid a living wage, and the expectations for tipping are lower in Italy than in America.

A Guide to Tipping in 10 Countries (PDF)