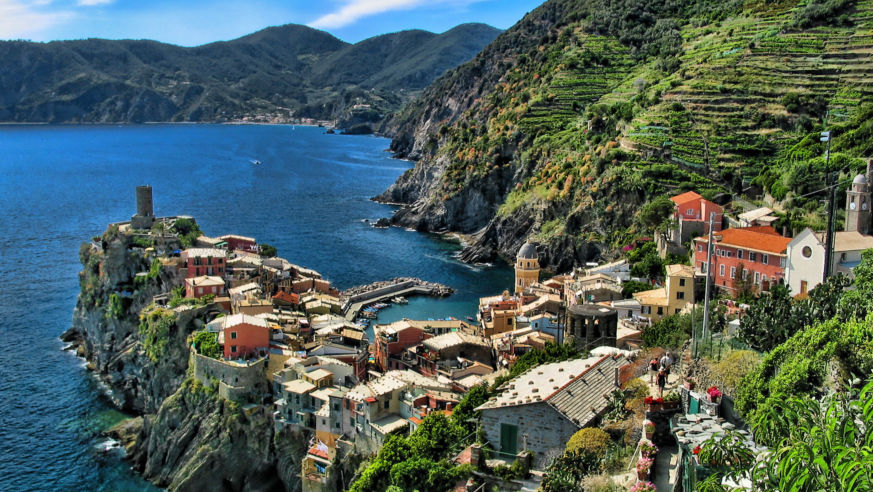 Vernazza, one of the five towns that make up Italy's Cinque Terre.

On October 25, 2011, a rogue rainstorm struck Italy's Cinque Terre area, causing floods and mudslides that nearly destroyed the scenic seaside villages of Vernazza and Monterosso—the other three towns, Corniglia, Manarola, and Riomaggiore were not affected. Remarkably, their communities came together—with little to no assistance from the Italian government—and managed to rebuild the two towns in time for the summer tourist season. The majority of the restaurants, B&Bs;, and hotels are now open, but check this list of re–openings from Vernazza, and this list of re–openings from Monterosso, before you go. For more information and updates on which Cinque Terre hiking trails are still undergoing construction, click here.

I visited Italy in May with my family, and the best part of our trip was the time we spent meeting the locals and wandering the five beautiful towns that make up the Cinque Terre on Italy's northwestern coast. We found out firsthand why European tourists had always visited this part of Italy, and why Americans were just starting to flock to it as well. The Cinque Terre even made Budget Travel's list of most beautiful paths, where hiking trails reign and cars are few and far between.

Invest in a Cinque Terre Train Card. For about $12 per adult, the Cinque Terre Card gives you unlimited access to the trails, including the super-scenic Via dell'Amore walk as well as unlimited regional train rides between Levanto and La Spezia until midnight. Just remember to sign the card and validate or stamp it before you board, and you're good to go. The daily train card costs $7 for children ages 4–12, and $10 for anyone over age 70. Families can save by buying the family card for roughly $32, as long as you're traveling with two adults and up to two children under age 12.

Stay in the five Cinque Terre towns, or just outside them. In an attempt to experience more everyday Italian live, we chose to stay in Levanto, one town north of the five towns, and use regional trains (included in the Cinque Terre Train Card mentioned above) to get around. During the summer months, Levanto turns into a major European beach destination, best known for its surfing. It was only a five minute train ride to Monterosso, and twenty minutes to Riomaggiore, the southernmost Cinque Terre town. There were also a number of boat options to reach the five towns, but be flexible, since the phrase "on time" is relative in Italy.

Don't be afraid to talk to the locals, even if your Italian isn't so great. When we finally arrived in Levanto after a long train trip from Lake Como, we were tired, hungry, and lost. Dragging around an over–sized suitcase each wasn't helping either. My sister approached a group of women with baby carriages, and asked for directions in as much Italian as she could muster—at which point one woman waved us over and proceeded to lead us clear across town to the front door of our B&B;, La Rosa dei Venti, where we were greeted with open arms by the owner, Mama Rosa. The amount of kindness shown to complete strangers like us was overwhelming, especially when Mama Rosa gave us a kiss on each cheek and told us we should have dinner at her favorite restaurant, La Loggia, a place we never would have found without her.

City Passes in Italy: Worth It or Not?