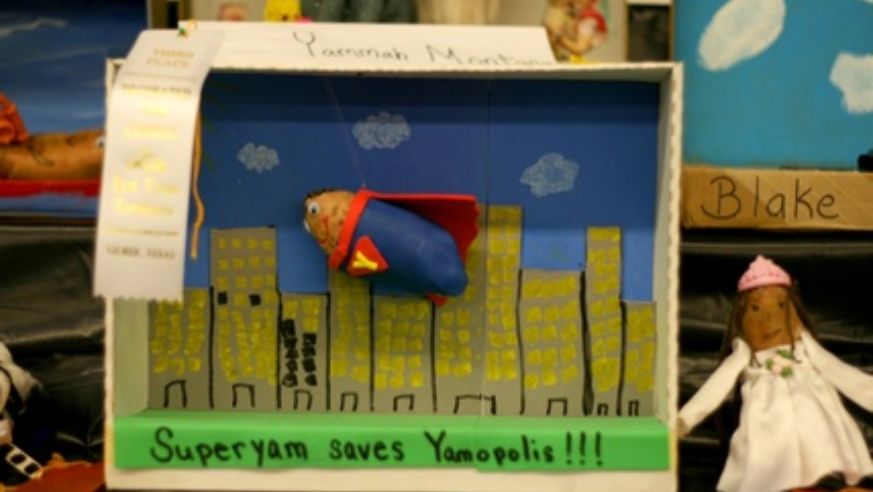 Growing up in Texas, I saw some of the world's most inventive festivals. From the Texas Rose Parade to the much less-enticing Mosquito Festival, my fellow Texans will use any excuse for a party.

Last weekend, I returned to my hometown of Gilmer just in time for the East Texas Yamboree, an annual festival that draws over 100,000 visitors to an otherwise tiny town of 5,000 residents. One of the oldest folk festivals in Texas, the Yamboree began as annual celebration of the county's Great Depression cash crop. The affair, celebrated with a fiery hometown pride, has grown to a three-day carnival and pageant.

The most amusing event of the festival is the Yam-decorating contest. Yams are painted, bedazzled, and festooned by K-12 students to mimic pop-culture icons, animals, and virtually anything else that can be patterned from a yam.

With categories such as yamimals and yam-beings, the contest embraces bad puns. This year's crop included a Superyam (complete with the title "Superyam saves Yamopolis")...

No small-town festival is complete without a pageant to crown a monarch. Here, it's the Yam Queen. Local high school senior girls engage in a cutthroat competition for the throne. The winner is the young woman who sells the most festival tickets. Recent winners have raised between $30,000 and $60,000...

On pageant day, the contestants wear billowing dresses and perform "swivel, swivel, turn, turn" waves from atop community-decorated floats in the Queen's Parade.

Elsewhere, I had an entertaining glimpse into the luxury life of show livestock, witnessing cattle and pigs being coiffed with blow-dryers and meticulously brushed for the judge of the livestock show. Near the livestock tents, the fairgrounds also offered an array of local goods from homemade jams to locally grown fruits and vegetables (including raw sugar cane), not to mention oddball items, such as a marshmallow-shooting gun for $5.—Liz McKenzie.