Starting in April, JetBlue will offer passengers a chance to sit in seats that have 38 inches of legroom for a fee. That's four more inches of legroom than the other seats on JetBlue's larger planes. Fees will start as low as $10 one-way for short-haul flights, and must be paid for at the time of ticket purchase. The additional legroom on the longest journeys will cost an extra $20 one-way.

On JetBlue's larger planes (A320s), rows 2 through 5 and in the emergency-exit seats in rows 10 and 11 will feature the additional legroom.

On JetBlue's smaller planes (Embraer E190s), the service is offered for only for the emergency-exit-row seats.

To clarify its new policy, JetBlue's chief, David Barger, commented at an investor's conference that, "We're not going to a two-cabin airplane," meaning that the airline will not create a separate business class section.

The goal, not surprisingly, is to add more revenue, notes the blog Tripso.

JetBlue is also expanding to up to 10 gates at Orlando airport, increasing its flights from there to 18 other cities, including in the Caribbean and Latin America. Earlier this month, JetBlue inaugurated its first routes from Orlando, including daily nonstop service to Santo Domingo, Dominican Republic and Cancun, Mexico. Later this year, daily nonstop service begins to Bogota, Colombia. The airline will continue to fly daily to Puerto Rico.

How much has the price of air travel changed in recent years? The government routinely makes an estimate, but its way of making estimates may be wrong. The problem? While officials count some fare hikes in their recordbooks, they ignore others. Let's start with the fare hikes that happened in the past week, which officials counted correctly. Since last Thursday, American, Continental, Delta, Northwest, and United hiked their fares between $4 and $50 roundtrip on most of their routes. These higher ticket prices will count as part of the rising cost of living by the Department of Labor's Bureau of Labor Statistics, or BLS. That's the federal agency that calculates the national inflation rate, a.k.a., the consumer price index. But the BLS may still be understating two other trends that have been making air travel more costly. No one knows the amount of the error&mdash;but official figures for airfare inflation in the past decade may be off significantly. Here's the skinny: The first problem is airline nickel-and-diming, which has become widespread. Services that used to be included in your ticket price now require additional fees. Let's say that two decades ago you paid $200 for a plane ticket. Back then, your ticket included meals, the option to check up to three bags for free, and a fair chance of an on-time arrival. Now, for argument's sake, let's say that the same flight still costs $200*, but you have to pay an additional fee for your meal, the cost of checking a third bag is $50 roundtrip, and delays drag your trip out for perhaps a half-hour longer. In short, you're paying the same, but you're receiving worse service. It's no different from paying more for the same quality of service. Either way, it's inflation.** There's a second problem. "The baseline service (the way you used to be treated without paying extra) is only getting worse," as editor Erik Torkells has previously noted. What flier hasn't felt the dramatic shortfall in customer service by airlines in recent years? Whether it's the additional leisure time one now has to spend booking one's own ticket and using self-service check-in kiosks, or the reduced legroom on planes, or the reduced meals and amenities once you're in the air, or the loss of valuable time because of record flight delays, we all have our gripes. But the number-crunchers at the BLS make few adjustments for service deterioration in its inflation statistics. This problem was first pointed out a decade ago by the Boskin Commission, which was convened by Congress to recommend ways to measure inflation better. (The commission was headed by Stanford University economist Michael Boskin.) The Bureau's 1997 response to the Boskin report acknowledged, among other things, that analysts have hypothesized reduced convenience and comfort of air travel" as an example of the "quality decreases that are ignored in the CPI [or Consumer Price Index]." Yet no solution has been put into place. Does it matter if the airfare inflation is underreported? Sure it matters. Calculating the inflation rate is a political exercise of the highest order. For instance, underreporting may mean that you don't get as much money as you should if you receive Social Security income, which is tied to government COLAs, or cost-of-living adjustments. Plus, the failure to accurately report the cost of flying also affects major policy debates about how airline mergers could help or hurt consumers. If politicians believe that fares have fallen far more than they actually have in recent years, they will be more likely to approve mergers between airlines, figuring that the resulting drop in competitiveness wouldn't affect consumers too much. To ward off potential nit-pickers, here are two footnotes: *In my example above, I am aware that a dollar isn't as worth as much today as it was two decades ago. I am assuming that the $200 ticket prices are "real, inflation-adjusted dollars," or, in other words, that the $200 tickets are truly an apples-to-apples comparison because I've adjusted them (for the sake of argument) for the declining purchasing power of a dollar over time. **"Either way, it's inflation," is a quote from Bloomberg columnist Caroline Baum, and author of Just What I Said, who has noted for years when discussing inflation through "service degradation" in various industries, including air travel. She's a pioneer in this line of thinking. 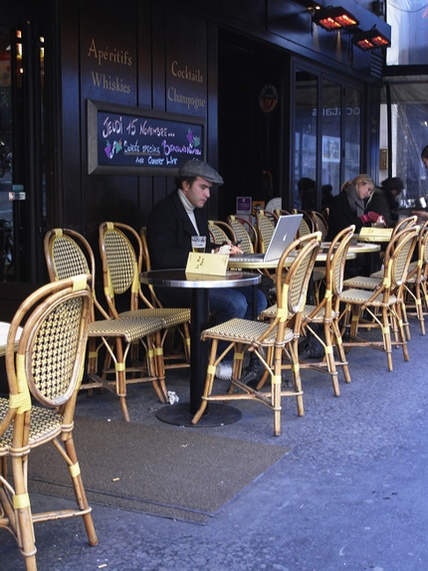 Paris through a photographer's eyes

We challenged a photographer to capture glimpses of unexpected, everyday life in Paris&mdash;and found ourselves falling in love with the city all over again. Ian Gittler is an author, photographer, and designer living in New York City. He is currently working on two new long-form books, one about youth culture and another comprised of detailed still lifes of vintage motors. Check out his slide show of fresh, evocative images of Paris. You can also catch him online at iangittler.com.

From some of the blogs we like: Upgrade: Travel Better&mdash;A better way to board a plane? Gadling&mdash;Hotels can freeze your debit card for incidentals. Smarter Travel&mdash;Another fare hike. Sprig&mdash;Eco-friendly travel tips. Family Travel at Boots n' All&mdash;The story of the “Diarrhea T-shirt.” (Complete with video) HotelChatter&mdash;A new extended stay brand, Element Hotels, launches.

A roller coaster based on... the Eagles?

Hard Rock Park, an amusement park opening May 9 in Myrtle Beach, S.C., just announced a new ride: Eagles--Life In The Fast Lane is "a thrilling Mine Train Roller Coaster set within the Cool Country area of the park." Is it just me, or do Eagles fans seem a bit out of the traditional age demo for an amusement park? (Then again, the other big roller coaster is Led Zeppelin - The Ride.) And does anyone consider them "country"? Personally, I'd have preferred a ride based on "Hotel California." I can't abide the song, but you could really scare the wits out of people if there were steely knives stabbing all over the place. Any other suggestions for rock 'n' roll rides, Eagles-based or otherwise?