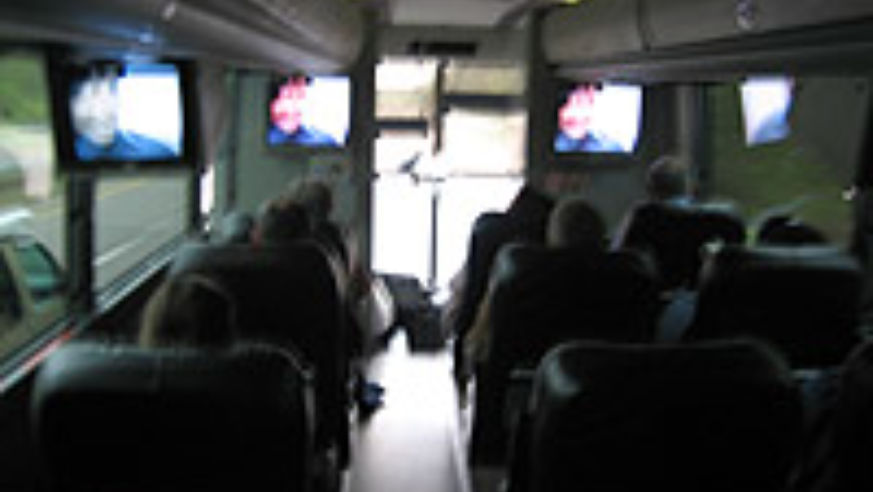 I first heard of LimoLiner from Amy Langfield of NewYorkology.com, a blog about NYC activities and event-listings. (Amy mentioned this bus line when she was a guest expert for a recent BudgetTravel.com live chat.)

While not exactly "budget travel"—my ticket was $140 roundtrip on four days' notice—LimoLiner was less costly than Amtrak's offer of $162 roundtrip (offpeak, regional service), and cheaper than renting the cheapest rental car (including gas and insurance costs) in the NYC area on a weekend—at least as far as I could find via Orbitz.

The most distinctive part of LimoLiner is that it comes with a "bus attendant" who serves meals en-route and who hands out earplugs so that you have the option of enjoying the movie that's shown as well as the live CNN coverage. (Because you need to use headphones to hear the movie, passengers who aren't interested in watching can be blissfully left to read or work on their laptops in the quiet. (Incidentally, 110-volt power plugs are available at each seat station.)

The bus was speedy, making only one scheduled stop, in Framingham, Mass.

On my trip, the meals were okay. The options were a chicken or a vegetarian sandwich, with a choice of a carb-based snack and a beverage. The seats were super comfy (reclining what felt like 160 degrees for easy napping). The young "bus attendant" was actually attentive, helping some elderly customers get blankets to stay warm in the A/C. Another perk: LimoLiner features a standard toilet seat like you'd find in a house instead of on a bus. On my trip, the bathroom had a vase with some fresh flowers.

Last details: Each row only has three seats, allowing for more elbow room and better views of the flat-screen monitors that broadcast movies and live CNN. The New York City stop is outside of the Hilton New York; in Boston, it's at the Hilton Back Bay. Average trip time is four hours.