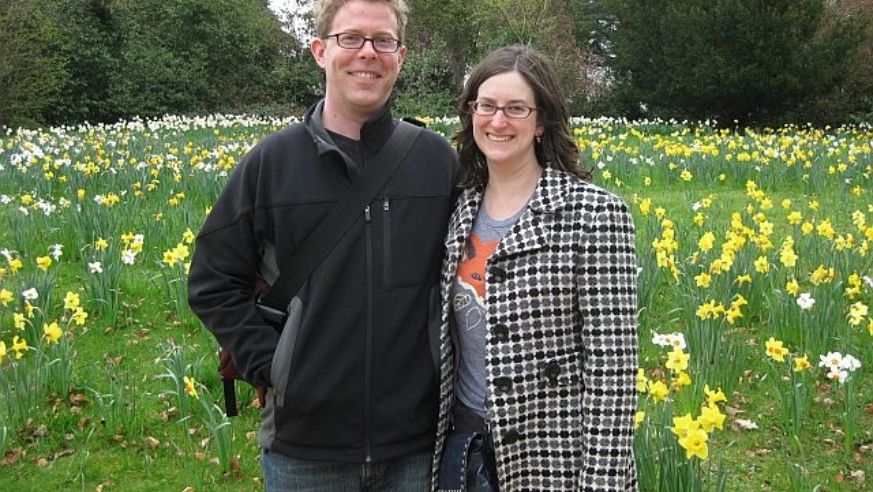 Maria Held and Bryant Johnson on their honeymoon in Oxfordshire.

For their honeymoon, newlyweds Maria Held and Bryant Johnson toured Oxfordshire and the Cotswolds while enjoying long walks and traditional English ale and food.

Great local meal...The Kingham Plough. This is a must stop for foodies! At lunch, my husband, Bryant, and I had a pork pie with chutney. At dinner, I had a tomato tart with Cerney goat cheese and Bryant had asparagus soup—from asparagus that were picked that very morning! I had a cheese soufflé as my main course, and he had mutton—the meal was incredible. They also had the local Oxfordshire brewery's Hook Norton beer on cask.

Our favorite part...Walking from the Swan Inn in Swinbrook to Burford and back. It was only about four miles round trip, and the setting was lush green and bucolic. There were plenty of farm animals to see on our walk, including the little newborn lambs because it was "lambing" season!

Wish we'd known that...We should have stayed near Oxford our last three nights. We wanted to have flexibility to spend more time in the country or in town and in the end had to stay at a Holiday Inn Express. It was fine, and on a bus line, but not nearly as charming as the inns we enjoyed earlier on our journey.

What we should have packed...Sunblock! We had no idea that it would be so warm and sunny in England in early April. Maybe we were lucky? We got sunburns one day and realized the error of our ways!

Worth every penny...Touring the Bodleian Library. It's not that expensive, but you do have to pay and should sign up in advance. I recommend the one-hour tour—it's amazing and fascinating!

Never again...Will I plan a trip where we stay only one or two nights and then move on to the next location. Since our whole journey was perhaps 100 miles in total, we could have easily stayed at two inns for our entire stay and used our rental car to have our day trips. We also rented our car for too long. We should have returned it as soon as we got to Oxford, but we kept it on hand just in case and then never used it since we could take the bus into the city.

Total rip-off...Early in our journey, we didn't realize that tipping was more optional than not. A bartender finally told us that tipping in many bars just means that the tips go to the sponsoring breweries. We figured this out after tipping considerably for almost the entire trip, and the dollar is weak compared to the pound, so the cost really added up.

Fun surprise...The Cotswold Falconry Center. We watched the handler's show, which included flying demonstrations of a Harris's hawk, a golden eagle, and a falcon, who rose to heights of several thousand feet and was barely a discernible speck in the sky until the handler held out a piece of meat on his glove—and the falcon plummeted at amazing speeds to snatch up his treat!

Overrated...The strange upstairs tour at Blenheim Palace, birthplace of Winston Churchill and currently the home of the 11th Duke of Marlborough. The palace and grounds are amazing—I definitely recommend taking the grounds tour—but you can skip the hokey automated tour that's upstairs.

Moment when things got tense...Walking back from Burford to Swinbrook, our footpath went through someone's fields. (It is very common that the public is allowed to travel through farmland, and there are great markers to point you in the right direction to stay on the path.) We reached a point where we were completely blocked by cows. Not being used to herd animals made us wonder...will they simply move when we approach? Will we be trampled? Obviously, we survived.

Hotel we liked...The Swan Inn in Swinbrook. Signage at the inn says "Dogs on Leads. Bantams on Loose." They have chickens walking around the grounds; the restaurant uses the chickens' eggs. We also loved the Falkland Arms in Great Tew—it had the best pub atmosphere of our trip.