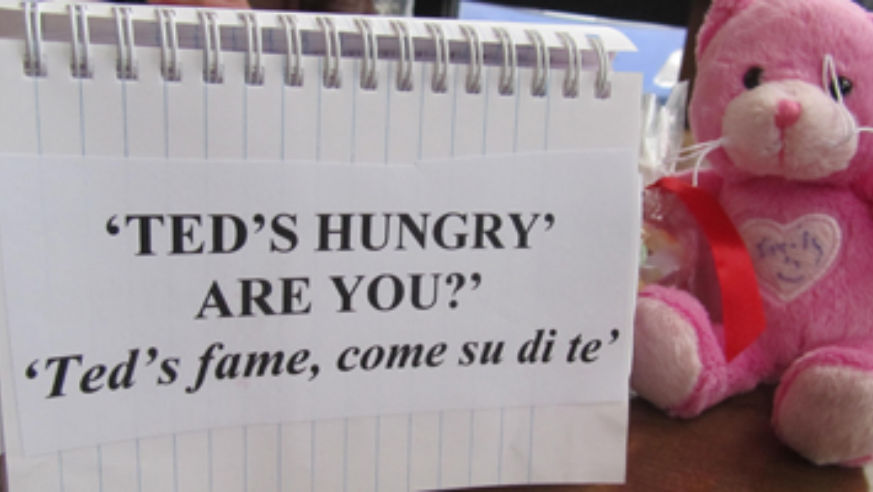 Courtesy j3dnight/myBudgetTravel
Maybe Ted should have tried these language websites...

In the summer of 2009, I traveled to Italy for the first time with my friend and her family. Armed with our Italian phrasebooks and a few cheat sheets from my younger sister (who had studied Italian in high school), we were off, but every chance I got to actually speak Italian was met with Italians who already spoke English and tried to put me at ease by speaking my own language. Finally, on the train from Rome to Milan, I was seated with a few native Italian speakers, but I just froze up. What if they didn't appreciate me unintentionally butchering their language? I had a five hour ride and didn't want to spend it in silence, but I chickened out big time.

Now that my father is planning to take my sister and me to Paris, Rome, and Venice next summer, my chance to redeem myself is on its way. I've since come across three websites that allow users to sign up and not only practice a new language, but learn it for under $100. While I haven't had a chance to seriously begin my language–learning endeavor, I thought I'd share the results from my first round of research. My plan is to select one and report back sometime after our little Italian adventure and let you know how it all worked out—if you have used any of these programs and liked (or disliked) them, let me know!

Learn a new language on your computer, iPhone, iPad, or iPod Touch.

Cost: Sign up to try a course for free, then select a payment plan for the remaining lessons: Depending on how much time it takes you to work on your new language, you can be charged $12.94 each month for the one–month course, $7.45 per month for a six–month course ($44.70 charged every six months), or take the recommended three–month course for $8.95 per month—charging $26.85 every three months to your card.

First impression: I tested out the first free lesson for the course in Italian. It seemed like a pretty easy set up, similar to flashcards, but with pronunciation practice as well. You can hear the phrase, understand the context, and at the same time, learn how to spell it as you go. During the review portion, you are asked to type in the correct responses, and pressing the help button will give you hints. There's no rush and if you need to start the course over again, you can.

Choose which level you wish to learn—beginner, intermediate, travel or reference—and learn at your own pace.

First impression: Unfortunately, there really isn't a way for me to test these lessons out since you have to order and ship the items first. It seems like more of a traditional route with books, CDs and DVDs compared to web lessons, but was recommended on the website of my local library as an inexpensive way to learn a new language. I came across some reviews for the books on Amazon and Helium, the worst being that the lessons were hard to follow, the best being that certain users would recommend the products to beginners. Has anyone had a successful experience with BBC Active Languages?

Founded in September of 2007, Livemocha uses social media to connect native speakers to those trying to learn a new language.

Cost: The free membership gives you access to the beginner and intermediate materials for any language, including the "Learn" and "Review" sections, as well as the opportunity to connect and chat with native speakers via social media. To gain access to more involved reviews, writing and speaking exercises, members can earn Tokens by assisting others in learning a language—whether you're providing submission reviews, helping with translations, creating flashcards, contributing tips, or completing coursework—or purchase them from the website to gain immediate access. For the most in depth reviews, speaking and writing exercises, members can purchase the Gold Key, allowing access to all exercises for all 38 languages, for either $9.95 for one month, or $99.95 for one year of unlimited access.

First impression: The hardest part for me was sticking to my plan to learn Italian. I would be interested in refreshing my Spanish and maybe even adding French or something different like Catalan to my repertoire. I am very intrigued by the idea of getting language, pronunciation and dialect tips directly from those who speak it everyday. It's kind of like a facebook application for language–learning and the lessons are pretty intuitive to work through. Users can post photos from their location and the website helps you make friends and match up with native speakers who are willing to offer tips. Be aware that the lessons do require Adobe Flash Player in order to use them, as the non–flash version isn't quite as exciting.

Have any of you used these websites yet, and if so, would you recommend them to a beginner? Tell us about your experiences below.

Learn Spanish in a Land of Volcanoes