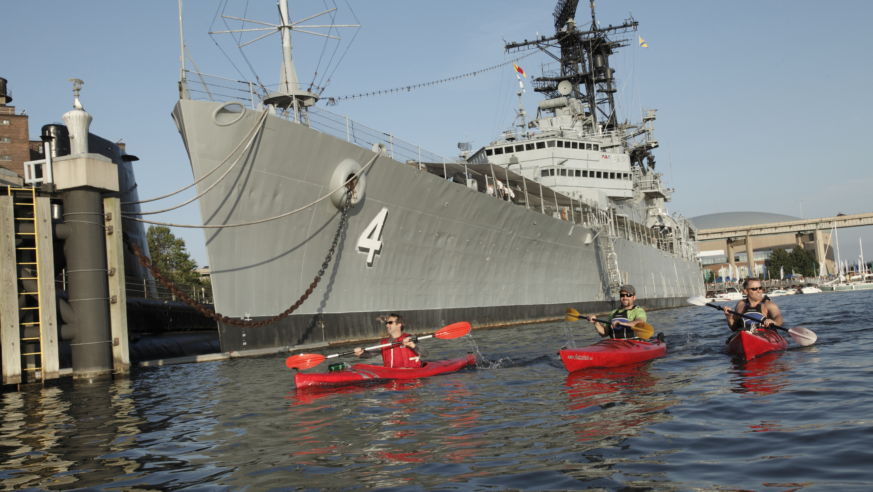 There's no better guide to a city than someone who lives there, so we asked Leslie Zemsky, "Director of Fun" for Larkin Square, a vibrant foodie-minded area, for her take on culture, food, and drink in the town she calls home.

You could easily make the case that Leslie Zemsky has the best job title in Buffalo: Director of Fun for Larkin Square. The longtime Buffalo resident, who's also an artists and patron of the arts, oversees a range of activities at Larkin Square, a cluster of once-industrial warehouse buildings from the 1890s that have been revitalized as office buildings and restaurants. It’s also a community gathering point. What started as a smattering of four or five food trucks in 2012 has become Food Truck Tuesdays, a regular Tuesday night event from April through October, with up to 50 food trucks on location, a cozy family dinner vibe, and free parking. Then on Wednesdays in the summertime there are free concerts from local musicians and, of course, plenty of food trucks.

Larkin Square is just one example of how Buffalo is undergoing a massive renaissance, even to the point that it’s attracting artists and entrepreneurs from bigger urban centers, who can go upstate and start businesses or rent studios in ways they can’t in pricier cities like Manhattan and Boston. We caught up with the mistress of fun to get the lowdown on all there is to see, do, eat, drink, shop, and eat again around her vibrant city.

It seems like creativity runs in the Zemsky family. Leslie’s son Harry owns Hydraulic Hearth, a beer garden-style brewpub in Larkin Square, and collaboration seems to be his modus operandi. On Food Truck Tuesdays, locals can bring their food-truck fare into the restaurant and order local beer to go along with it. Harry has collaborative brunch with Breadhive, a bakery coop on the West Side. From September through early May, Hydraulic hosts Bagels and Booze, which features Breadhive’s bagels cooked in the restaurant’s pizza oven. Black Sheep, a hip restaurant that bills itself as serving “global nomad cuisine,” stops by to do a pig roast at the restaurant during Sunday Gospel Brunches.

Bagels are indeed one of the signatures of Breadhive, which features a café as part of the popular bakery. In addition to their daily sourdough, they make a different loaf each day of the week. Their full roster of sandwiches includes creations like the Bjork (tempe bacon, kimchi, avocado, sprouts, and more.)  But far be it from locals to be content with your run-of-the-mill sandwich, even if it is creative. That’s where Five Points Bakery comes in. Their specialty is toasts and offerings run the gamut from sweet to savory.  Leslie’s son is also venturing into the sandwich realm: this spring he’s teaming up with another restauranteur to open Angelica Tea Room, where the focus is on classic British tea sandwiches as well as artisanal tea. They’re also planning a serious cocktail program.

Buffalo, in fact, has staked its own claim in the craft cocktail renaissance that has swept the United States in the past few years. Key players in town are Buffalo Proper, which is known for its small plates and drinks like the Night in Tunesia (light rum, dark rum, Campari, almond, pineapple, lime). Another go-to is The Dapper Goose, a farm-to-table specialist in a minimalist yet cozy space. With drinks that are as creative as the seasonal dishes, Leslie deems it the best restaurant of “New Buffalo.”

STATE OF THE ART

With its vast collection of iconic artwork, including Picasso, Frida Khalo, and Georgia O'Keeffe, the Albright-Knox Art Gallery is the crowning jewel of Buffalo’s culture scene and it’s free on the first Friday of every month. That’s also the night of the Allentown Gallery Walk, a lively open studio event. Another one of the city's cultural gems is Burchfield Penney Arts Center, which is located on the SUNY Buffalo campus and houses the largest collection of watercolor by Charles Burchfield as well as works by variety of Western New York-connected artists. On the second Friday of each month they host an array of happenings, from concerts and screenings to happy hours.

With so much creative energy in Buffalo, it was inevitable that artists, culinary types, and entrepreneurs would team up to maximize their resources and, of course, their impact. The result? Multiple emporium-style establishments that serve as markets, hip food courts, and incubators. Leslie lists them off: West Side Bazaar on the emerging West Side features an assortment of artisans and entrepreneurs, many of them immigrants and refugees, who sell things like jewelry, clothing, skincare, and crafts, as well as a commissary kitchen out of which various culinary types run stall-like businesses. Buffalo, Leslie explains, has a history of being immigrant-friendly and supportive, so you’ll find quite a few operations specializing in ethnic cuisine. She calls out the Burmese food purveyors in particular. The Expo Market is new to downtown and, like West Side Bazaar, it serves as an incubator for new business owners. From build-your-own burritos to creative salads and even a bar and from crafts to jewelry to baked goods (artisan dog biscuits, anyone?), the calling card here is local, local, local. There’s also the Horsefeathers Building, which houses a variety of permanent vendors, including Lait Cru Brasserie, a laidback general-store-chic eatery which is known for its French-inspired eats and selection of grilled cheese sandwiches (we told you—Buffalo is obsessed with sandwiches!), and Nickel City Cheese & Mercantile, Leslie’s stop for all kinds of global cheeses and delicious specialty items, like housemade hot chocolate mixes. The building also houses a seasonal craft and food Winter Market.

To hear Leslie talk about the abundant watersports in Buffalo, you’d think she was talking about the California coast or the Colorado River. “One of my favorite things to do when visitors come to town is go kayaking on the Buffalo River,” she says, launching into an enthusiastic explanation of Canalside, downtown waterfront. The state has been focused on and investing in developing the area and cleaning up the river. It shows. These days there are free concerts on Thursdays throughout the summer and the riverside is home to the largest outdoor artificial ice rink in New York State. (Skating there will only put you out $5.) There’s also free fitness classes and lightshows projected on the massive grain elevators, remnants of the industrial past. Leslie suggests BFLO Harbor Kayak as a convenient place on the waterfront to rent kayaks.

In just and hour of paddling, you can glide down Elevator Alley, a stretch of the river that runs between huge grain elevators on both sides. If kayaking isn’t your thing, there’s paddleboards as well as inventive water bikes you can rent from BFLO that are so innovative that they’ve been recently patented. And landlubbers, don’t despair. There’s a few miles of trails nearby and Reddy Bikeshare, a bike-share program that allows you to cruise the city on two wheels.

MAKE A DAY OF IT

New York City is, of course, a town where pedestrians rule. Cities upstate, however, are more sprawling, but that’s not to say there aren’t walking districts. Elmwood Village seems almost designed for strolling. The Albright-Knox Museum sits at the north end of the neighborhood. From there, Leslie suggests heading down Elmwood Avenue and pop into Lexington Co-Op, which offers a king’s ransom worth of local goods and sustainable organic fare. Grab one of the mean coffee drinks at the café to take on your way. Continue along to Talking Leaves, a bookstore that opened in 1971 and bills itself as “Independent and Idiosyncratic.” (Leslie collaborates with them on an author series at Larkin Square.) After you browse the stacks, hit the adjacent Aroma Café, a cozy spot that does triple-duty as a café, a wine bar, and a trattoria.

There are plenty of cute boutiques to weave your way through, like Half and Half, which opened in 2016 and sells stylish threads for men and women as well as quirky home goods. Fern Croft Floral, which is loaded with creative arrangements, neat gift items, and planters made by a local potter. It is, Leslie declares, very different from any kind of flower shop you know. Apparently people in the Elmwood Village are really into gardening. To wit: Garden Walk Buffalo, biggest garden festival in the state where you can wander through people's backyards and enjoy their blossoms, happens each July.

But to hear Leslie tell it, the pièce de résistance of the neighborhood is yet to come. Hotel Henry is slated to open this April in the Richardson-Olmsted Complex. The now Landmark building housed the Buffalo State Asylum for the Insane when it was completed in the late 1800s on a landscape designed by Frederick Law Olmsted. The building underwent a $100 million renovation to retrofit it for the ultra-hip boutique hotel. The featured farm-to-table restaurant will use food grown on the grounds. “In a year, I think it’ll be like a museum because of all the architecture,” says Leslie. “They’re pricing it well because they want it to be an affordable experience. I think people will come to Buffalo just for Hotel Henry.”