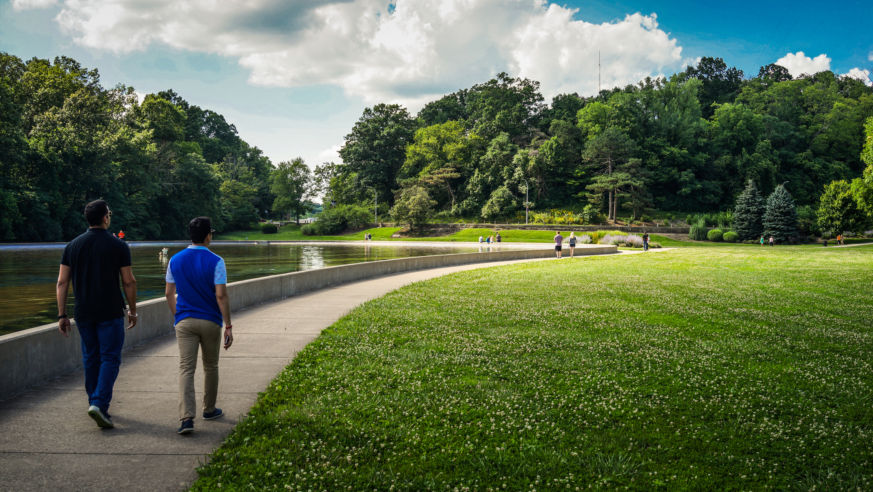 There's no better guide to a city than someone who lives there, so we asked local bar-owner and seventh-generation Cincy resident Molly Wellmann for her take on culture, food, and drink in the city she calls home.

About three minutes into conversation with Molly Wellmann you fall under the spell of her enthusiasm for Cincinnati. Her lineage here goes back seven generations, so it makes sense that after 12 years working as a bartender in San Francisco, she couldn’t justify staying away any longer, so she went back home and opened a bar. Then another bar. Then another. And she cannot imagine doing that anywhere else. “There’s magic in Cincinnati. I’ve traveled quite a bit, but I never found the je ne sais quois we have here. There’s something about its heritage or history. It doesn’t matter who you are or what background you’re from. I think it feels welcoming to everyone.”

We checked in with her to get the inside scoop on where anyone visiting the Queen City should eat, drink, hangout, and shop. Just one word of advice: arrive hungry. Very hungry.

Eat Your Heart Out

Cincinnati was once an enclave of German immigrants, and their legacy endures in some of the city’s longstanding eateries. Molly is particularly fond of Arnold’s (arnoldsbarandgrill.com), one of the city’s oldest bar that dates back to the 1860s. “You walk in and you feel like you’ve gone back in history,” she says. The gorgeous slab of mahogany, wooden booths, and vintage booths are only the start of it. It’s the lack of TVs that really makes her a fan. And the world-class bourbon selection. And the year-round outdoor patio that regularly hosts bands. And the blueberry chicken dish. And their spaghetti. And a few other things on the menu of eclectic comfort food.

She’s also a regular at Salazar (salazarcincinnati.com) which features exposed brick walls and tiled floors, remnants of its storied past, and turns out very modern fare. “I’m enamored by what Chef Jose Salazar does in the kitchen,” she gushes. “He’s inspired by old recipes, and he brings them into a modern way of eating—but it’s never too far off the map. It’s just always something lovely.” And, as per her usual preference: there aren’t any televisions. Situated in a unique cross-section of alleys, it’s located one block from Washington Park, one of the city’s biggest public spaces.

When an occasion calls for a splurge, her choice is Please, a nod to the term the local German immigrants use with a quizzical tone to mean everything from “what did you say?” to “what do you mean?” to “are you for real?” “He thinks completely outside the box,” Molly says of Chef Ryan Santos. “His food isn’t molecular, but it’s close. He’s worked in kitchens all over the world, and he’s taken bits of what learned and put them together in a really cool way.”

Molly couldn’t consider herself a true Cincinnatian if she didn’t recommend Ruby’s Steakhouse (jeffruby.com/Cincinnati), which dates back to the 1980s and now has five outposts across the region. It is “a force to be reckoned with,” Molly says. “I hold all steaks up to Ruby’s steaks. Everything here is just over the top—from décor to food to staff uniforms. There’s never a time when someone says no. they always say ‘always ‘We’ll work it out for you.’”

Philly has cheesesteaks, NYC has pizza, and Cincinnati has whippy dips. And you shouldn’t leave Cincinnati without eating one. Or three. Whippy dips are the Midwest’s seasonal fix to soft-serve ice cream cravings. Sold mostly out from nostalgic little stands all over town and pretty much every local has a favorite that they frequent. Molly’s is Putz’s Creamy Whip (putzscreamywhip.com), which greets guests with a hand-written menu. Don’t bother reading it, though. Chocolate/vanilla swirl with chocolate sprinkles is the only thing that’ll do the trick, Molly insists. But the city’s ice cream obsession doesn’t end there. Another one of Cincinnati’s culinary signatures is French-style copper-pot-made ice cream, and Graeter’s (graeters.com), which started in the early 1900s and now has 16 soda-fountain-style parlors around town, makes some of the best. You’d be remiss if you didn’t try the chocolate chip, made with big chunks of chocolate. (“Not chips,” Molly clarifies. “Chunks of chocolate!”) Grippos is another brand that’s inextricably linked to Cincinnati. A bag of the hometown potato chips is a must if you’re at any of the number of low-key neighborhood bars with a burger and a beer, and if you are anywhere that you spot a menu item with Grippos in the description, take note that it may come crushed up and used as seasoning. It’s how locals like theirs.

Make an Afternoon of It

Cincinnati is a city of neighborhoods—52 neighborhoods, to be exact. And with its location so close to Kentucky, there are several Bluegrass State areas that are included in that count, including Covington, a hip Kentucky enclave that Budget Travel named a Best Affordable Discovery in 2017, and Newport. It’s hard for Molly to pick favorites, of course, as each neighborhood has its own things to love about it, but whenever a visitor is in town, she recommends Mount Adams, a neighborhood on to of a hill (Cincinnati has seven of them) on the east side of the city. The bucolic Eden Park lives up to its name, she assures. It’s anchored by the Krohn Conservatory (cincinnatiparks.com/krohn/), a magnificent paradise with bonsai trees, a desert garden, orchards and more, and is home to the Cincinnati Art Museum. There’s no shortage of choices where food and drink go, so spend the day and explore the diverse bars and restaurants. For something offbeat, check out the Vent Haven Museum (venthaven.org), the world's largest--rather, only--ventriloquist museum, displaying 900 ventriloquist figures from 20 countries and lots of oddball memorabilia that's sure to, well, get you talking.