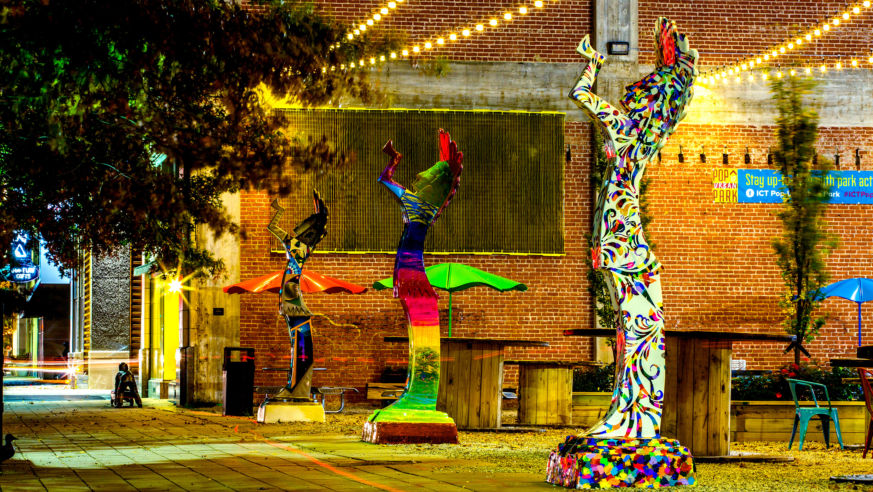 There's no better guide to a city than someone who lives there, so we asked Andrew Gough, owner of one of the city's hippest cafe and roaster, for his tips on where to eat, shop and hangout in and around the town he calls home.

When Wichita was first established as a trading post along the Chisolm Trail, it was a popular stop for cowboys driving their cattle from Texas to the end of the railroad in Kansas. Today, although some still call it a “cow town,” the only outlaws are the business owners and artists who are blazing their own trails.

In modern times, Wichita has been known as the air capital of the world because of the high concentration of factories producing aircrafts, a heritage that’s on display at the Kansas Aviation Museum. But more than that, there's been fast and furious urban growth over the past few years, with rapid development in the downtown area, which sits on the Arkansas River, affectionately referred to as “Our Kansas River.” (Wink*) Apartment buildings have gone up and new bike lanes are highly trafficked.

To get a sense of the Wichita landscape, we checked in with Andrew Gough, who owns the popular cafe/roastery Reverie Roasters (so popular, in fact, that it’s moving to a much bigger space after opening in 2013 in its original location.) He had the inside scoop on where the eat, hangout, and daytrip.

DINE AROUND THE WORLD WITHIN THE CITY LIMITS

A few years ago, Andrew was on a dining panel enlisted by the Wichita Eagle, the city’s daily newspaper, because there were too many new restaurants for the one primary restaurant critic to keep up with. Now that’s saying something. Given that, plus the fact that he owns a café and his phone is a who's who of local culinary types, it’s safe to say he’s a trustworthy guide for anyone curious about where to dine around town.

To hear him tell it, some of the city’s most interesting meals are offered at tucked-away mom’n’pop eateries that collectively serve a rich assortment of ethnic cuisines. He’s a regular at Manna Wok, a homey Korean restaurant where the kimchee spread is off the charts and the owner clearly loves her customers as much as they love her spot. Why else would the walls be plastered little photographs of diners who’ve visited over the years? It’s a ritual that goes back so long that Polaroids from the early days still hang on the wall.

Latin American fare is the pick on the southside of town. Usuluteco, a low-key and family owned El Salvadorian joint, is set inconspicuously in a strip mall just off a busy street where mom cooks and dad runs the front of house. Everything, he says, is 100% authentic, so he has a tough time deciding what to recommend. “Definitely the pupusas,” he says, referring to the classic El Salvadorian masa cakes with savory fillings. “But also anything with chicken or beef is really good. And also their pastelitos--fried empanadas stuffed with something like beef stew." In other words: everything.

But if you were to press him on what food is identifiable with the region the way that cheesesteak is synonymous with Philly and pizza with New York, the nu way, a loose meat sandwich, is "a total Wichita thing," Andrew declares. It originated at a restaurant of the same name (Nu way), and you'd be best off going to the source to try it. "You need to eat it at the restaurant because when you get it to go, the grease just steeps through the bag. Sure, it's a heart attack on a bun, but it's delicious."

More generally speaking, humus and all sorts of other Middle Eastern dishes are ubiquitous, thanks to a humongous Lebanese community in town. Wichita is also home to a sizable Vietnamese population, so you’d be well served at any of the many pho joints around town.

HEARTY MEALS IN THE HEARTLAND

But Kansas is smack in the middle of the heartland, so it’s only reasonable to expect to find places dishing out good ole American comfort food. Wichita, it seems, prefers its comfort food with a healthy dash of creativity. Tanya’s Soup Kitchen is one of Andrew’s go-tos for sandwiches he describes as “well thought out” (smoked turkey, blueberry barbecue sauce and provolone on an onion kaiser roll, anyone?) and soups. On Wednesdays they make a curry soup, but all the locals know that it’s the legendary tomato bisque you’ll want to try. Good thing it’s on offer all week. There’s a neat twist here. “They have recipe cards for all their products so you can make them at home, but interestingly, there’s still a line out the door every day."

Sometimes you can find the most extraordinary grub in the most unlikely places. You might not be enticed by the no frills exterior of Dempsey’s Burger Pub, but the creative burgers here will teach you not to just a pub by its façade. The selections rotate, but the Thai peanut butter burger is a recurring choice and Andrew’s favorite. After all, it’s made with espresso from his roastery.

Dempsey's is located in Clifton Square, a block-long stretch comprised of mostly Victorian buildings that house an array of businesses, including some that are unique to the city, like College Hill Creamery, a homey neighborhood spot that turns out house-made ice cream. Tissu, a hip, charming little shop that sells yarn and all sorts of notions, features a sewing studio with classes. If you’re in town with friends and up for an offbeat group activity, the Wichita Escape Room is for you. A “live action” escape game, you get closed in a room with your group and all you have is puzzles and logic tricks to figure out how to find the key to get out.

Each of Wichita's many neighborhoods has its own very distinctive flavor and character. The Douglas Design District, which is awash with murals and revitalized storefronts, is regarded as the most creative community. Well over 90% of its hundreds of businesses are small and independently owned. Not surprisingly, it’s where you'll find Andrew’s cozy Reverie Roasters, a go-to cafe for thoughtfully prepared java drinks. His is one among the ranks of businesses that’s making Wichita a destination for foodies. Down the street, Donut Whole offers fresh donuts made with local ingredients and coffee made with beans from Andrew's roastery. He says it's the shop that ignited the 'hood's creative energy. Complete with a gallery and a lounge with live music, he describes it as “funky, creative, super-duper unique, and eclectic.” Next door is Piatto, a pizzeria run by a man who went to Italy to learn how to make true Neapolitan-style pies and brought a traditional pizza oven back with him. The aforementioned Tanya’s is across the street.

One of the most exciting things in the DDD is the growing craft beer scene. Hopping Gnome and Central Standard Brewing both feature a brewpub where you can hangout and drink the house suds. Plus they’re food-truck-friendly, so people pick up grub from the trucks and bring it inside for a session. Workers at both brewpubs are really engaging and informative, Andrew says, offering history lessons on beer styles, information on where they source ingredients, and elaborate explanations of beer styles. “Every one of these new breweries does that. It makes it all more interesting,” he says.

2016 marked the centennial of Coronado Heights, a castle-like stone structure built into the side of a bluff pathways from spiderweb to the top....pathways carved into hill... Located about an hour and 15 minutes outside town and listed on the National and Kansas State Registers of Historic Places, it features an observatory deck that offers breathtaking views of the Smoky Hill River Valley and it’s one of the “8 Wonders of Kansas Geography.” (Who knew?) Coronado Heights is surrounded by a an elaborate network of walking paths with astonishing views. Make a day trip out of it and stop in nearby Linsborg, known as “Little Sweden” because it was built by Scandinavian immigrants back when they settled there in 1869. That history lives on in its Scandinavian architecture and rich cultural sites.

About 30 miles in the opposite direction of town is Mushroom Rock State Park, a collection of bizarre oversize standstone formations; millions years ago water left rock formation in the shape of fungi. "There's so many little things and always more to discover. It's a beautiful drive to get there."