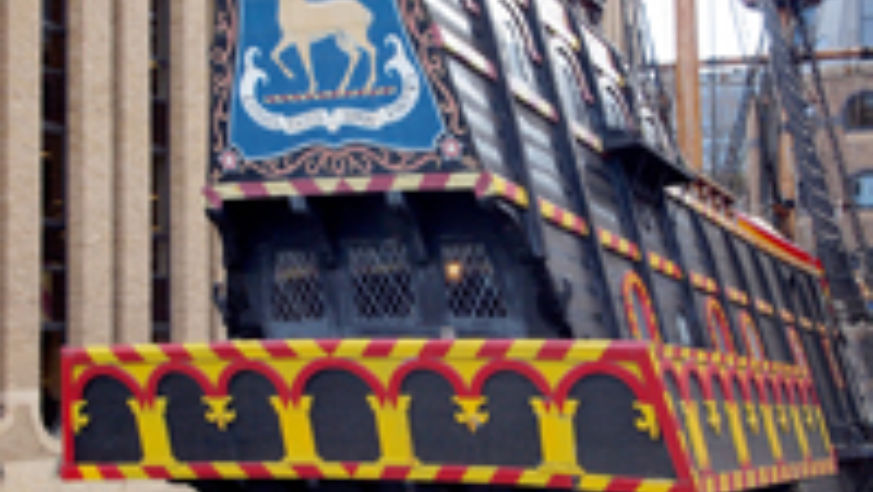 In 1577, many years before he defeated the Spanish Armada, the great English buccaneer and Sir Francis Drake became one of the first sailors to circumnavigate the world in a wooden galleon called the Golden Hinde.

Along the way, he made what was probably the first European landfall in California, naming it Nova Albion. He also captured one of the largest hordes of treasure ever taken — paying off the English national debt in one fell swoop.

On his return, the Hinde became so famous that it was put on public display on the south bank of the Thames here in London — the earliest recorded example of a ship being preserved for public posterity. And while it rotted away, a full-sized working replica has replaced it and remains harbored on the river. It, too, has circumnavigated the globe and sailed over 140,000 miles — many more than the original. The replica Golden Hinde is in a prime spot — a few minutes walk from both the Tate Modern and Shakespeare's Globe. And unlike both of those sights it's a real hit with kids.

It's possible to visit the ship anytime between 10 a.m. and 5:30 p.m. on a self-guided tour. But it's far better to come on one of the activity days. May is set to be a busy month for these, with 23 days of organised activities, from guided historical tours and full day living history days. On May 8 and 22 there are pirate fun days, when kids have the chance to dress up as pirates, participate in a series of re-enactments and generally run riot on the boat.

And on May 29 the Golden Hinde will be staging one of its summer sleepovers — and overnight living history tour for children between 5 to 10 years old (accompanied by an adult), which includes an afternoon and evening of costumed activities, a Tudor dinner, and sleeping out on the gun deck amongst the cannons. A Tudor breakfast of bread and cheese is provided in the morning, followed by a snack of hot chocolate as you return to the twenty-first century.