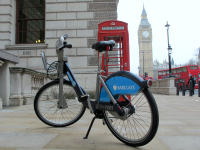 As of late last week, visitors to London can now rent bicycles in the city center for as little as one pound for a 30-minute ride. Since July, about 5,000 so-called "Boris bikes" (named after the mayor) have been kept in automated racks posted throughout the city.

Until now, only local residents were allowed use the two-wheelers. But as of Thursday, you can use your American credit card to unlock a bike, paying a small access fee and an hourly fee. The first half-hour is free.

I tested out the service today, walking up to a kiosk that stood next to a flock of the blue bikes, all painted in the prominent Barclay's bank logos.I used the kiosk's touch screen to request a 24-hour pass. I inserted my American credit card, and £1 was deducted, plus a currency exchange fee for my issuing bank. I then was asked to re-insert my card to finalize the transaction, and this took about 40 seconds. I was given a slip of paper with a code on it. I walked over to the first bike that looked good to me—the one already adjusted to a decent seat height—and punched in the code, unlocking a three-speed.

I biked around for less than a half hour before I re-docked the bike at a different station. After shopping for Christmas cards, I went to a kiosk, and re-entered my credit card. It recognized that I still had many hours left on this pass, and I received a new code, and unlocked a new bike. Because I only biked for less than 20 minutes, I wasn't hit with another charge.

Unlike in many U.S. cities, there are no helmet laws in London. I felt relatively safe riding around, as the traffic congestion charge has reduced the amount of traffic in downtown London.

Finding a bike station is easy. There are 352 docking stations scattered in the city's heart. Print out a free map for routes and bike paths online or pick up a copy from a tourist official. (One catch: You have to be at least 14 years old to ride one of these bikes, and at least 18 to rent one for casual use.) tfl.gov.uk/barclayscyclehire

Video: How to bike in Paris

One guy, one bicycle, one cross-country tour 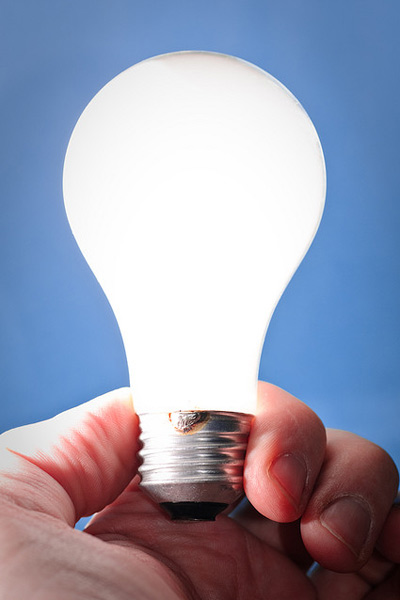 What is your best money-saving, time-crunching, fun-optimizing vacation strategy? If there's one thing that sets Budget Travel apart from its peers, it's you&mdash;our readers have provided some of the most thoughtful, savvy travel tips this magazine has published in its 12-year span. We celebrate the best of these in the Reader Tips section at the front of each issue and have included some of our favorites in Budget Travel's two most recent books. The Smart Family's Passport came out in 2010, while The Smart Traveler's Passport hit shelves in 2007. This week, we're on the hunt again for some fresh new travel tips to feature in an upcoming issue. But this time, we're raising the bar a bit higher to seek out the most original, unusual ideas. To give you an idea of what that means, here below are the top 10 most popular tips submitted to us by readers: 1. Pack a Ziploc bag for any and all purposes. 2. Bring a nightlight so you don't stub your toe in dark, unfamiliar hotel rooms. 3. Pack old clothes so you can throw them away on vacation and fill the newly empty space in your suitcase with souvenirs. 4. Keep a scanned electronic copy of your passport and other important documents on an e-reader, laptop, or smartphone. 5. Print and bring along a chart to remind you of foreign exchange rate. 6. Split your family's clothing evenly between multiple suitcases&mdash;if one bag gets lost, someone isn't left completely without clothes. 7. Bring an empty water bottle through airport security and refill at a water fountain. 8. A steamy shower works just as well as ironing. 9. Don't forget to bring along a roll of quarters for tolls and parking meters. 10. Always take a picture of your rental car before you leave the lot to record any pre-existing damage. These are fantastic ideas, all, but now we're looking for even fresher concepts, and we'd love to hear from you! Email your best money-saving, time-crunching, fun-optimizing vacation strategies to tips@budgettravel.com. Be sure to include name and address&mdash;you want credit for your genius, don't you?! More from Budget Travel Help a reader! Know of a travel-ready detergent? A reader proposes smart new routes for river cruises Reader report: Booking New Zealand hotels with Wotif and NeedItNow 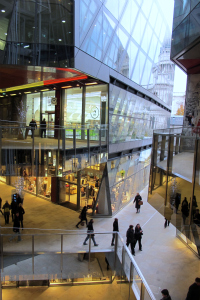 Outside the entrance to a new shopping mall that's a Frisbee toss from St. Paul's Cathedral, a small girl recently channeled her inner Eloise, overdramatically saying to her parent, "Can we go in? It looks so shiny!" The child had a point. With its misted glass exterior and interior open-air walkways, "One New Change" looks more like a cutting edge modern art museum than what it actually is&mdash;the grey financial district's first new shopping complex in 130 years. So it's unsurprising to learn that it was built by Pritzker Architecture Prize-winner Jean Nouvel, who has also built the stylish modern art museum in Paris, Fondation Cartier. What makes this mall unique is that its roof presents the city's best view of St. Paul's Cathedral. On its eighth-floor roof terrace, you can now take in the full panorama of the city skyline. It's a public perspective that, until now, no visitor to London could easily access for free. In the winter, of course, you may prefer to stay inside in the caf&eacute;, which also overlooks the cathedral. While shopping, be sure to check out British brands All Saints, Reiss, and Topman (its first stand alone location in the city), which burst with exceptional, gift-worthy items. onenewchange.com, St Paul's tube station, map. Insider's tip #1 Be sure to go around the corner outdoors to the side of the mall opposite from St. Paul's and look at St. Mary-le-bow Church&mdash;home of the city's most famous church bells. A century ago, all neighborhoods within earshot of these bells were the heart of Cockney-speaking, working class London. In its courtyard, Americans may be surprised to see a statue to John Smith, the founder of Virginia and a national hero. Insider's tip #2 On the second floor of One New Change, there are free public bathrooms, open seven days a week. (You may laugh now, but wait until you're visiting London and fumbling through your pockets for a 50p coin to activate the door on a public loo.) MORE FROM BUDGET TRAVEL Readers' Choice: What's the most beautiful city in the world? London hotels: Want that towel? You have to pay $2.40 World's best new boutique hotels under $150

How to fight a cold on the fly

Having a head cold on a plane may make you contemplate the guillotine. But you can reduce the severity of the symptoms by trying these "counter measures" from the American Pharmacists Association: &bull; Drain a glass of water before your flight takes off. Dry air in an airplane cabin generally aggravates cold symptoms. Fight this problem by drinking a lot of non-caffeinated and non-alcoholic beverages while on board, too. Yes, staying hydrated on a flight can be inconvenient. But when you're congested, changes in cabin pressure can spark intense pain in your sinuses, and the resulting discomfort can last for days afterward. You won't regret the hassle of drinking up. &bull; Don't overeat. Sorry to break the bad news, but there's no scientific support to grandma's saying, "Feed a cold and starve a fever." &bull; Don't assume your local pharmacy knows what Tylenol is. Pack an emergency stash of medicine for your trip. If you have to seek help at a local pharmacy, try to do some Internet research about the names of medicines in advance. Tip: In Europe, the generic pain reliever acetaminophen goes by the name of paracetamol. &bull; Don't speak the local language well? Be careful. Drugs that can only be sold with a prescription in the U.S. (because of the potential for accidental misuse) are often available over the counter in foreign countries. Don't be intimidated by a pharmacist. Insist that he or she accurately understands what your symptoms are and what health conditions you may have before you agree to his or her recommendations. &bull; Alternative, or complementary, treatments are more generally accepted abroad. Don't be surprised if a pharmacist suggests you try a homeopathic treatment that's unfamiliar. &bull; Decongestants often go by different names overseas. In Europe, for instance, the decongestant pseudoephedrine (used in American drugs like Sudafed) is seldom sold over the counter. Ask your pharmacist for their preferred option. Finally, a Budget Travel tip: Never let a pharmacist talk you into buying more drugs and products than you want. MORE FROM BUDGET TRAVEL 7 Ways Doctors Stay Healthy on Vacation Health Products That Could Save Your Trip Are Health-conscious Cruises All the Rage?

Would you pay extra for an allergy-free room?

Have you ever had trouble getting a good night's sleep in a hotel room because your allergies were acting up? Well, you may be able to breath a little more easily, now that Hyatt Hotels &amp; Resorts has announced it will be outfitting all 125 of its full-service U.S., Canadian, and Caribbean properties with hypoallergenic Respire rooms. The rooms are geared toward travelers with asthma, allergies, and other respiratory sensitivities (more than half the U.S. population has tested positive for one or more allergens, according to the American Academy of Allergy, Asthma &amp; Immunology), but they'll work just as well for anyone who just wants a better breathing environment. In the past few years, other hotel chains have introduced similar rooms (Wyndham and NYLO, among others) but none to the extent that Hyatt is planning. Respire rooms are currently available to book in 65 Hyatt properties; by year's end it should have a total of 2,000 of the allergy-friendly rooms spread across its Hyatt Resorts, Park Hyatt, Grand Hyatt, Hyatt Regency, Hyatt, and Andaz brands. How do they work? Each room undergoes a comprehensive, multistep process, implemented by New York&ndash;based company Pure Solutions, that involves sanitizing the air unit, treating all surfaces and fabrics to minimize allergens and irritants, installing a medical-grade air purifier, and covering mattresses and pillows with encasings designed to keep allergens out. Huh? Pure Solutions explains the process and science on its website behind it much better than I can here. The result is a room designed to eliminate up to 98 percent of airborne viruses and bacteria, along with pollen and other irritants. I know what you're thinking: Will you feel like you're staying in a hotel, or in a sterilized hospital? It's a valid question; steps other hotels have taken to reduce allergens have included removing carpeting and soft surfaces and replacing them with wood flooring and leather- and vinyl-clad furniture. But the Pure Solutions process is so thorough that those actions aren't needed at Hyatt properties. Your Respire room will feel just as cozy in decor and atmosphere as any other room in that particular hotel. In fact, the only visible difference will be the presence of the air purifier. The rooms, of course, don't come without a price; expect to pay $20 to $30 more for a Respire room. Would you pay a little extra to get a good night's sleep? More from Budget Travel 4 ways to get a free hotel room this fall Nothing to sneeze at: Allergy-free hotel rooms Have a Green Stay America's favorite hotel chains London hotels: Want that towel? You have to pay $2.40