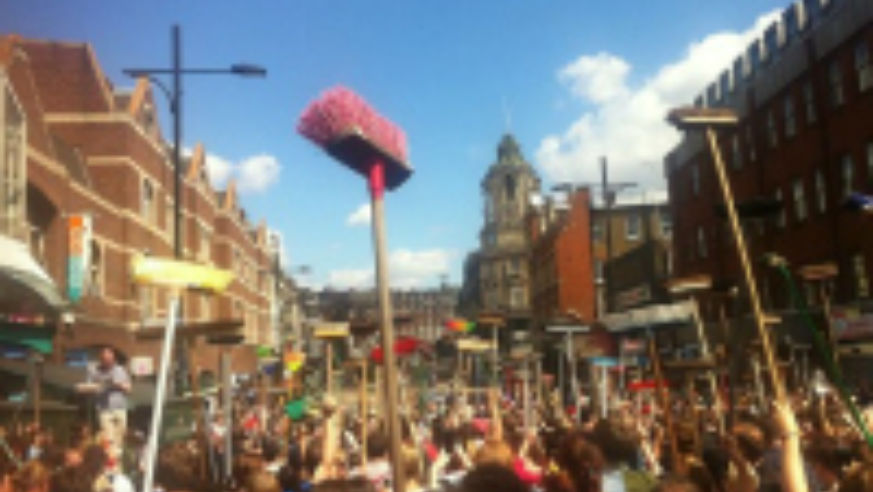 I finally fell in love with London during the riots. Stiff upper lip, and all that.

By writing a positive blog post about the riots, I don't—by any stretch of the imagination—mean to trivialize the suffering of the more than 200 people made homeless by arson or the countless shops—many of them family run—that were wrecked in a terrifying way that no amount of property insurance can forgive.

I also don't want to ignore how upsetting it is to live in a place experiencing unrest. The uncertainty can be intense. On Monday in South London (where I live, far from the tourist circuit), shops and pubs that ordinarily remain open until eleven o'clock were spookily closed by five. Helicopters flew overhead. Police were nowhere to be seen. The Balham mosque, roughly 300 feet away from my flat, was being guarded by its black-bearded worshippers. Hours later, shops about 150-feet and farther from my flat were hit by stupid violence. The echo-chamber of TV news and the worried messages from neighbors made it a sleepless night.

But enough with the bad part. What hasn't been said enough is that Londoners are a wonderfully resilient and open-hearted people—as their response to the riots demonstrates. They're very much worth visiting on your next major vacation.

The Blitz-era slogan of "Keep Calm and Carry On" became a visible reality as I worked side-by-side with neighbors in cleaning up. The signature photograph in newspapers and on websites has been of citizens carrying brooms in the streets. Naturally, new friendships have been microwave fast.

Within hours of Monday night's widespread looting and arson, the Twitter feed @RiotCleanUp received more than 80,000 followers. I followed its instructions, bringing a broom to nearby Clapham Junction, which had been hard hit during the looting. In this one neighborhood on a weekday morning, there were hundreds of Londoners ready and willing to clean up. They had marched there from a previous borough where they had found there was nothing to clean up because the residents had already been busy at work since dawn. Keep calm and carry on, indeed.

Why did people riot? We have to wait for smarter people than me to explain why the riots happened. In the meantime, I have sympathy for the view expressed online by a fellow travel writer, Benji Lanyado: "A sad underlying factor: Their lives are boring. This is thrilling for them. Suddenly they matter." He says that, and I repeat it, without condoning the rioters: They're morons, and they deserve criminal punishment. But I agree with Lanyado that it was the illicit thrill that probably caused many of them to take to the streets.

When I moved here as an ex-pat a year ago, I had immense respect and curiosity for England. Who couldn't? But admiration isn't the same thing as affection. Having seen the city's classy response to trouble, I'm now totally enamoured.

I never expected the moment I would fall in real love with London would be while sweeping up broken glass and smashed electronics in a street. But Londoners have never seemed more impressive. Stiff upper lip and all that.

WHAT ARE YOUR THOUGHTS ABOUT LONDON'S RIOTS? SOUND OFF IN THE COMMENTS. THANKS.

London: Tours led by the homeless