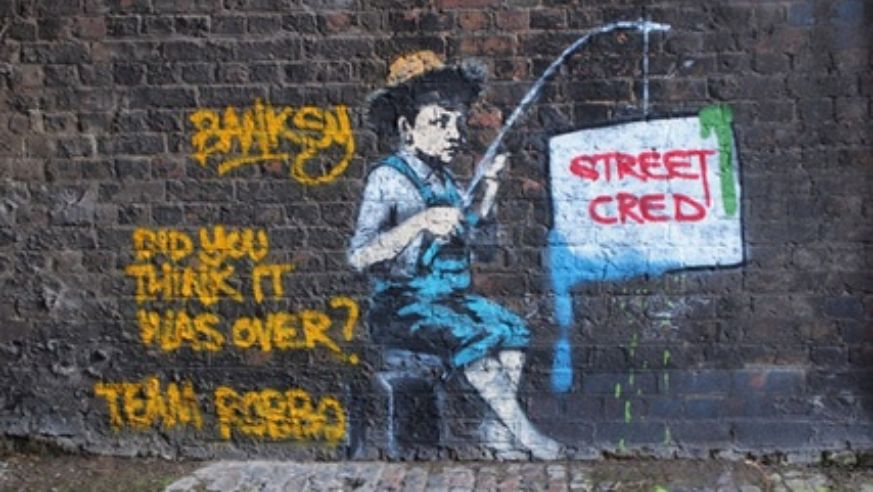 The world's most famous graffiti artist since Basquiat, Banksy, launched his first feature film this past weekend. "Exit Through the Gift Shop" is premiering at cinemas throughout London and the U.K. before launching overseas. The artist made his name on the streets of London and his graffiti remain daubed on walls from Camden to Croydon.

But there's far more to London street art than Banksy. Many of London's graffiti crew see the Bristol-born, middle-class artist as an imposter. Along the Regent's Canal in the north London borough of Camden his work has been defaced by another cult graffiti artist Robbo, angry at Banksy artist painting on what he has long regarded as his patch.

London's street art—arising out of an illegal and often destructive hobby—is some of the most creative and vibrant in the world. And whilst some borough councils (a.k.a. local government officials) paint over graffiti almost as soon as it appears, others leave the quality daubs, or even positively encourage their creation. Hotspots include Camden, Hoxton, and Whitechapel. Look out for Banksy's little boy fishing on Regent's Canal in Camden (22 yards east of Camden market, subway Camden Town), and his painter apparently inscribing the name of a rival artist, Robbo, 300 yards east of the market.

In Hoxton (nearest subway, Old Street) take a stroll down Rivington street and around to see the distinctive shop shutter work of graf stalwart Eine, with huge cryptic letters and single words in corporate brand iconography. Hundreds of artists have painted nearby streets, especially Brick Lane in Whitechapel.

Perhaps the most exciting new street artists are the Cut up Collective, who dismantle giant advertising hoardings in whole or part and re-assemble them as mosaic pictures—of hooded teenagers, urban landscapes, alienated children…

You can even find street art indoors. Mainstream galleries throughout London have begun to showcase street artists, most famously the Tate Modern in 2008 , which invited "graffers" the world over to cover its iconic brick walls with their images.

You can catch Banksy's new movie in his own-self created space (for a week only)—a makeshift theater in amongst the street scrawl and under the dripping railway arches in Waterloo. Full details of showings are on banksy.co.uk. Bring a warm coat.

TRAILER FOR THE MOVIE:

Check out our London page