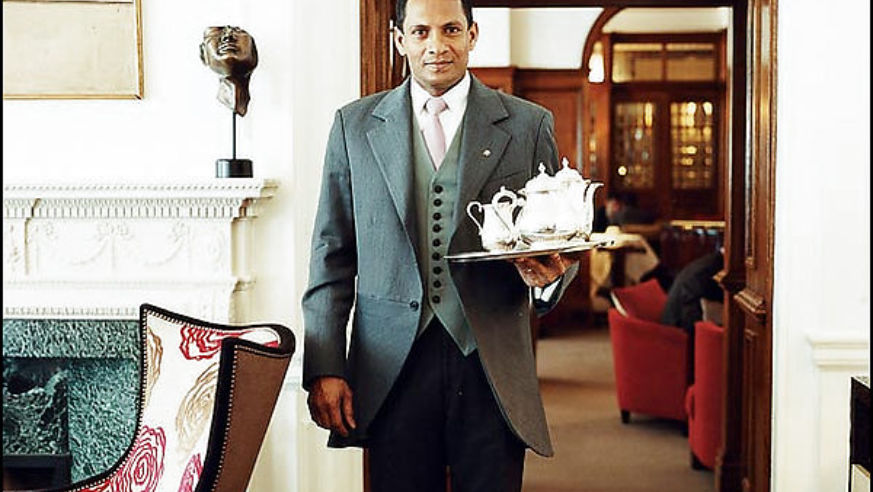 Sue Parkhill
A server at Brown's

Here are the best spots to enjoy a traditional afternoon tea in London.

For all its swank and glamour, a formal afternoon tea still has a place in British society. Of course, you'll see Russians surrounded by shopping bags and bodyguards, Japanese photographing the teapot, and Americans buried in guidebooks. But you'll hear British accents, too, as they celebrate, or seduce, or do a deal. (Meaning you should book that teatime at least six weeks ahead; these are popular spots.)

The Ritz has been serving tea ($72) in the flowery, domed Palm Court, where golden cupids frolic around the ceiling, for a hundred years. It's so romantically over the top that if you aren't in love when you sit down, you soon will be, if only with the baby-carrot cake. Waiters in swallow-tailed coats bear many silver trays of tea sandwiches; the smoked salmon ones are especially fine.

Once the tearoom at Brown's Hotel was quite, well, brown; now that the hotel has been given a stylish shake by new owner Rocco Forte, the golden oak paneling is joined by modern olive and cranberry low-slung chairs, attracting the trendy without scaring the traditionalists. The smart little pastries look like something from nearby art galleries, but there are also the tea-sopping cakes--Victoria sponge, Dundee cake--that have partnered with tea here forever ($65).

If you crave more of a high tea--and remember, a high tea means a workingman's supper--The Dorchester has a very highfalutin one ($85), with main courses like poached salmon. The Dorchester stands out for its emphasis on house-made treats and seasonal ingredients. Choices change with the chef's mood: One day may bring a caramelized-pineapple brûlée, another rose-petal jam. The afternoon tea starts at $57.

Sleek art deco drama is Claridge's keynote: The china lacks the rosy-posies you find elsewhere, and the room is lit for intimacy. Walls are hung with photos of past patrons, including the Duchess of Windsor, and there's a discreet buzz in the darkened room; it's not surprising, as champagne appears on many tables. This is a sensuous sort of teatime ($62), where the chocolate cake is an uncivilized ooze.

Another worthwhile tea ($39) is at The Wolseley, the clubby, high-ceilinged café on Piccadilly where the waiters barely stop short of kissing hands. The sparkling space is prime territory for the dealmakers and the diamond-adorned, the bankers and the Beckhams. After a subtle ogle at the crowd, eyes drop to the plates: Finger sandwiches march in precision, scones break open with a twist of the wrist. This is where old and new England meet at the tea table.