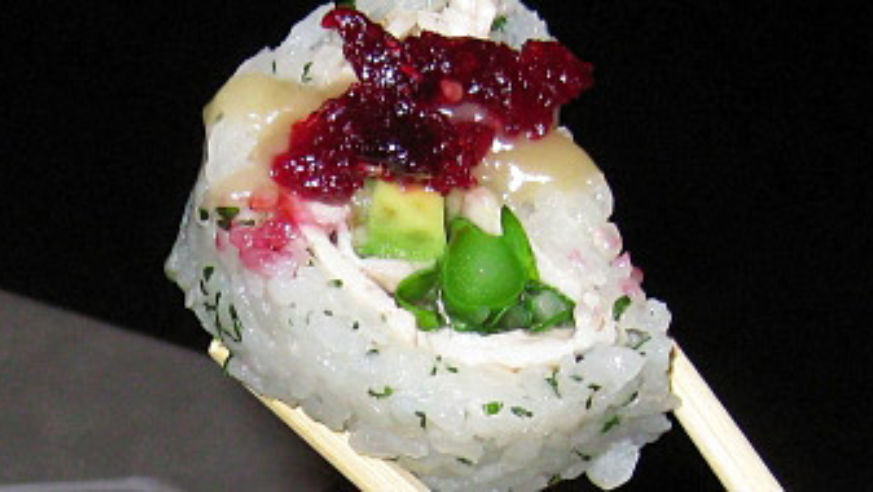 Most U.S. restaurants can present reasonable facsimiles of Thanksgiving on their menus in November, be it turkey at an American bistro or squash ravioli at an Italian ristorante. But Asian restaurants are at something of a loss. How does a full-blown turkey and all the trimmings translate into something in a bento box, for instance?

In Downtown L.A., Takami, a Japanese boite with slick pretensions, believes they have the answer in the form of its horrifying-sounding "Turkey Sushi Roll" ($20). The first bit of good news is that the turkey isn't raw; it's just simple sliced deli meat. And, thankfully, there's no seaweed anywhere: it's all wrapped in soy paper. It's all becoming less and less like sushi by the minute…

True, there's rice on the roll. But it's seasoned with dill and chives, two flavors that end up dominating the whole plate. Essentially, this is a nice sandwich made with rice rather than rye. The avocado, asparagus, cucumber, and sprouts provide a bit of green, and the gravy drizzled atop the roll, while not super-pretty, doesn't really affect the flavor.

Though the roll itself isn't thrilling, we'd be remiss not to mention the cranberry jam than accompanies the plate. Mixed with the sweet fruit are sesame seeds, a combo that no one should live without trying. In fact, you might want to bring this idea home for Thanksgiving. —Katherine Spiers