—Paul Clements, from the September 2009 issue of Budget Travel 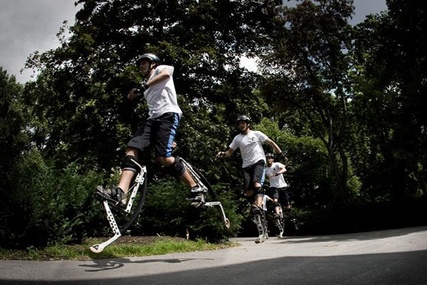 Step aside, pogo stick, your punk cousin has just arrived. Known by many different brand names, the powerbock&mdash;or bock for short&mdash;was invented by the nutty German aerospace engineer Alexander B&ouml;ck, who apparently studied the movements of kangaroos to help develop his prototype. A cross between a pogo stick and stilts with the inertia of a trampoline, the three-foot-high boots allow brave souls to boing six feet in the air, take nine-foot-long strides, and sprint at over 20 m.p.h. When strapped into the snowboard-like bindings, a disaster may be waiting to happen&mdash;that's called "bailing." But it could also be just the edge some are looking for while touring abroad. Which is where Bounce Clan comes in. Set in Prague, the powerbock team spends about 30 minutes near Kampa Park restaurant training their helmeted and body padded clients to walk&mdash;and then tentatively jump and jog&mdash;in the carbon-fiber boots before taking off over Charles Bridge, down cobblestone side streets, and into the Old Town Square of the Czech capital. And even though this isn't the point, tourists are inadvertently receiving a workout as well. Besides having to constantly shift their weight from side-to-side to keep from keeling over, they are burning calories five times faster than while jogging, and using 95 percent of their muscles&mdash;or so the claims go. Apparently a university test group in Korea lost an average of seven pounds in five weeks after using their bocks. That's all the incentive one should need to finish their last kolache pastry&hellip; Of course, bouncing down the street at high speeds is not good enough for the more extreme-sports prone. Even though the boots have just gained popularity over the past five years, there are already Guinness World Record holders for flipping backwards 20 times in 20 seconds, and somersaulting more than sixteen feet over a parked car. They have even been spotted during the closing ceremony of the 2008 Beijing Olympic Games. See the video: So if you can't get out of their way, you may as well strap in and start bocking, because it appears these boots are here to stay&hellip; Bounce Clan, powerbock tour from $46, 011-420/774-467-211, bounceclan.cz.

We've been asking top guidebook writers to recommend alternatives to well known tourist attractions. Today we talk with Robert Reid, U.S. travel editor and spokesperson for Lonely Planet. He's certainly the right person to ask about travel in Southeast Asia. He has authored over two dozen guidebooks, including Myanmar (Burma), Southeast Asia, Colombia, Trans-Siberian Railway, and his own online guidebook to Vietnam at reidontravel.com. Ha Long Bay cruises make almost every first-timer's itinerary to Vietnam, with reason. The boat trips through a valley of limestone mountains are gorgeous. But Ha Long Bay can get crowded. If you've seen it&mdash;or are prone to getting seasick&mdash;you may want to instead go to Tam Coc, which is a quick two hours south of Hanoi, near the town Ninh Binh. There are good reasons why Tam Coc is known as the 'Ha Long Bay of the ricefields'&mdash;and why filmmakers chose it as the glorious setting for Catherine Denueve's famous scenes in Indochine.* If you rent a motorcycle and go to backroads, you can stop at an ancient capital, or climb towering limestone cliffs to pagodas with giant views. in nearby Cuc Phuong National Park, you can see very rare gibbons not found elsewhere and hike in solitude in the jungle. In many ways, Tam Coc offers a better experience than Ha Long Bay, especially if you're the type of person who finds the presence of fellow western travelers to be a distraction. To beat the day-trip crowds to Tam Coc, bus to nearby Ninh Binh from Hanoi and overnight there or in a simple guesthouse next to Tam Coc. If you wake at 7 a.m., you'll have the place to yourself on land or on water. BONUS TIP!Most visitors to the Mekong enjoy guided boat tours past thrilling local scenes along chocolate-colored rivulets of the big river. Most go to Chau Doc, near the Cambodia border. But no tours make it to Tra Su Bird Sanctuary about 20 miles south (it's not even in the guidebooks). Ask a local motorbike rider to take you there for a low-canoe ride through a mossy waterways as thousands of birds come home at dusk. There's a watchtower to climb where you can see the sun dip into purple and rust past far-off mountains, then take a spooky ride back as birds gossip about the day's adventures. For the time being, you'll have it to yourself. MORE FROM BUDGET TRAVEL Dear First Time Vietnam Visitor Ex-pat Steve Jackson offers tips for travelers he learned the hard way over his extended stay in the country MORE TRAVEL ALTERNATIVES Better than the Inca Trail? Better than the Eiffel Tower? Better than Stonehenge? Better than Buckingham Palace? THE FINE PRINT Now don't get us wrong. These guidebook writers (and their publishers, like Lonely Planet) are not dismissing any attraction that's rightfully famous. Everyone agrees you can have fantastic experiences at well known attractions. All we're trying to do here is recognize that, under some circumstances and for certain types of travelers, lesser known attractions may have their own appeal, offering comparable experiences. *CLARIFICATION: *The sentence about the movie Indochine was corrected a day after publishing to correct a error introduced during editing. 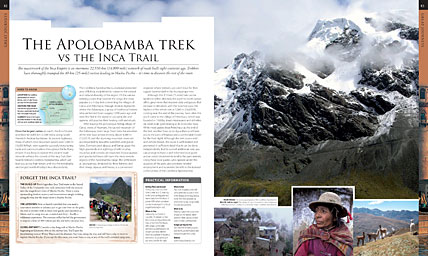 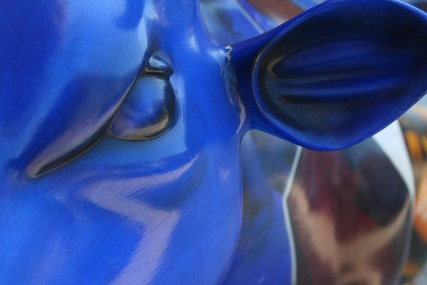 A few of our favorite links from around the 'net this week: A Kansas City barbecue throwdown&mdash;you'll never guess where the best is. [The Faster Times] Hertz to start taking "before and after" photographs of rental cars. [Upgrade: Travel Better] Remember that plane stranded on the tarmac in Minnesota? The Department of Transportation has found someone to blame. [AP via msnbc.com] Cool photos: A giant Candy Land game overtakes San Francisco's twisty Lombard Street. [sfist] Tips for managing your carry-on bag. [L.A. Times] Three cemeteries full of the famous. [Jaunted] National Parks: A new generation of Native American entrepreneurs is bringing an updated sensibility to tribal tourism. [The New York Times] For more travel blogs, go to Alltop.