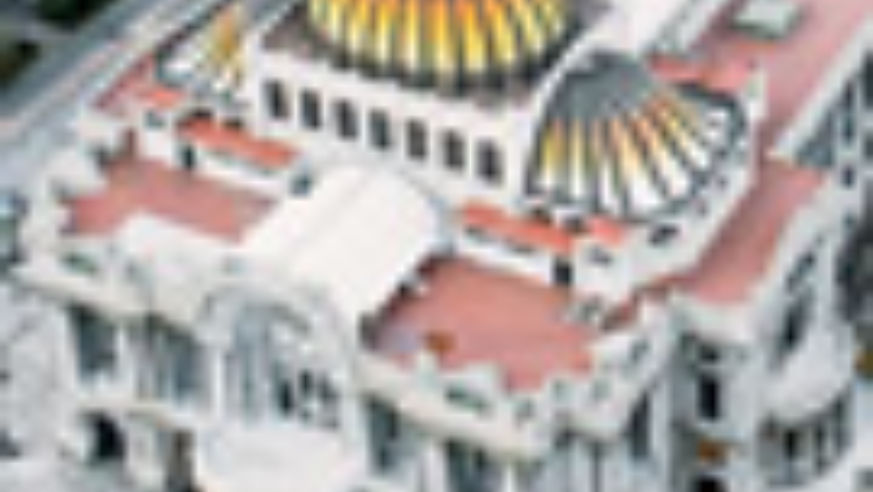 Steering your way to the heart of a city of nearly 10 million is no easy feat. These 20 insider tips demystify the metropolis, from its homegrown design scene to its best cheap eats.

1. It's actually not impossible to navigate
Known locally as D.F., for Distrito Federal, Mexico City sprawls across almost 600 square miles—it's roughly the size of Houston but packs in four times as many people. Still, if you plan your itinerary by colonia, or neighborhood, it's easy to get a handle on things. Some of the most popular sites are in perpetually thronged Centro as well as in hipper districts southwest of it, like Condesa and Roma.

2. Art appreciation is an all-ages affair
At the Museo Universitario Arte Contemporáneo, you can expect to stand shoulder-to-shoulder with students, young families, and skeptical-seeming abuelas, who examine the mixed-media installations as carefully as they do melons at the market. Insurgentes Sur 3000, Ciudad Universitaria, 011-52/55-5622-6972, muac.unam.mx, admission $2.25.

3. Traditional textiles are getting a new life
Designer Carmen Rion was working with artisans in Chiapas five years ago when inspiration struck. With a few creative modifications, they could turn the beautiful fabrics the weavers made on old-fashioned waist looms into modern, one-of-a-kind garments. Rion's sliver of a shop in Condesa shows off the results: black evening dresses covered in elaborate pleats, and floor-length gowns swirling with hand-painted prints. While a few pieces top $3,000, there's something in here for everyone, such as woven-fabric handbags with leather straps (from $117) or necklaces made of brightly colored needlepoint circles knit by one of her salesclerks ($28). Michoacán 30-A, Hipódromo Condesa, 011-52/55-5264-6179, carmenrion.com.mx.

4. Real margaritas that don't have umbrellas
Don't be deceived by the thimble-size glasses: The Fonda El Refugio's decidedly potent signature drink is one of the city's best. (The perfect ratio of fresh lime to tequila accounts for the dangerously smooth sipping.) Fortify yourself with regional dishes such as huachinango a la Veracruzana (red snapper in a spicy-tomato-and-olive sauce) before ordering a second round. Liverpool 166, Zona Rosa, 011-52/55-5207-2732, fondaelrefugio.com.mx, entrées from $18.75.

5. Day-after medicine that goes down easy
Contramar, an airy, white-walled lunch spot in Roma that's favored by businesspeople and creative types, has a valuable secret of its own: the caldo de camarón, a rich broth bobbing with shrimp. According to lore, it's a surefire cure for a hangover. Durango 200, Roma Norte, 011-52/55-5514-9217, contramar.com.mx, soup from $4.25.

6. Down-home snacks in a swanky setting
On sidewalks all over the city, you'll see vendors selling fried chapulines, or grasshoppers—a salty, crunchy treat doled out of grimy plastic buckets and doused with fresh lime. For those who want a less dodgy source of pre-Hispanic finger foods, there's Restaurante El Cardenal, which has uniformed waiters, stone columns, and stained-glass windows. Escamoles, served in a mortar, look like grains of rice swimming in butter. Spread them across a warm tortilla, add guacamole, and take a bite. You'll never guess that the slightly sweet granules erupting in your mouth are ant larvae; they taste just like popcorn. Palma 23, Centro, 011-52/55-5521-8815, restauranteelcardenal.com, escamoles $9.25, entrées from $13.25.

7. A Mexican design hotel done right
Wherever Grupo Habita goes, a scene is sure to follow. And the splurge-worthy CondesaDF outpost from the country's champion of hip hotel design is no exception: Weekend brunches in the turquoise-walled breakfast room draw local aesthetes looking to unwind on cowhide-covered banquettes. And the 40 mostly white guest rooms are equipped with iPods loaded with indie rock (from Cat Power to The Killers) and have sliding walnut screens for extra soundproofing. But the design doesn't come with attitude. Don't be surprised if staffers start calling you by name 15 minutes after you arrive—and the resident chocolate Lab, Conde, stands at the ready to welcome you. Veracruz 102, Condesa, 011-52/55-5241-2600,condesadf.com, doubles from $195.

8. A chain-hotel alternative with style
Bridging the gap between cookie-cutter franchises and tiny B&Bs is Hotel La Casona, a 29-room inn in a 1923 beaux arts mansion just a few blocks northeast of Condesa. Polished details such as black-and-white-checkered marble tile, framed architectural engravings, and crown moldings show off the inherent grace of the high-ceilinged structure. Plus, the included breakfast (cappuccinos, cooked-to-order omelets) puts the old banana-and-a-roll routine to shame. Durango 280, Roma Norte, 011-52/55-5286-3001, hotellacasona.com.mx, doubles from $140.

9. Candy you can't find anywhere else
The recipes for the handmade sweets at Dulcería de Celaya—itself a confection of mirrors and swirling belle epoque paneling—were handed down by the original owners of the shop, established in 1874. Six generations later, the Guízar family sells the same sugary treats that lined the shelves on opening day: crumbly jamoncillo made from milk, candied-sweet-potato-paste rolls called camotes, and suspiros, chewy, multicolored coconut bonbons. 5 de Mayo 39, Centro, 011-52/55-5521-1787, candies from 50¢.

10. A befitting home for Diego Rivera
There's no shortage of places to see Rivera's paintings, but only one destination showcases his lesser-known architectural achievement: the Museo Diego Rivera Anahuacalli, completed to the artist's plans in 1963. A hybrid Aztec-Mayan pyramid reimagined through the lens of mid-century modernism, it's made of glass and black-lava stone and spans 12,916 square feet, looming over a reproduction 10th-century Toltec ball court. Inside, a maze of shadowy rooms showcases Rivera's own vast collection of pre-Hispanic pottery, sculpture, and artifacts. Museo 150, San Pablo Tepetlapa, 011-52/55-5617-4310, museoanahuacalli.org.mx, admission $1.50.

11. Lunch can last until 7 p.m.
Chilangos, as locals are known, have a continental sense of time: Work begins at 10 a.m., no one thinks about lunch until 3 p.m., and once they sit down to la comida, it can take hours. Although many restaurants are technically open only for the midday meal, it's not unusual to walk by at 7 p.m. and see people still huddled around what must be a 10th round of drinks—turning tables means nothing to Mexicans.

12. Independent fashion has a suitable site
With its glossy black-steel-and-glass exterior, Sicario may seem out of place on a grungy strip of Roma, but inside, the tightly edited selection of distressed jeans and blue-suede shoes from Mexican labels like Yakuza and Paola Hernández is a natural fit. Adding to the ambience: plywood displays, street art, and a lively soundtrack (the collective that runs the place also promotes emerging DJ acts like Beat Buffet and The Wookies. Colima 124, Roma Norte, 011-52/55-5511-0396, sicario.tv.

13. Even bread has its own institution
Follow the smell of baking bread wafting down a Centro sidewalk into Pastelería Ideal, founded in 1927—a vast, chandelier-lit room where tables are piled high with every Mexican pastry imaginable. It's self-serve, so grab a tray and load up on goodies like cochitos, gingerbread cookies shaped like pigs, or the sugar-encrusted buns known as conchas, which locals like to eat for breakfast. Be forewarned: When a baker emerges from the back with a batch fresh from the oven, stand back or risk being trampled. República de Uruguay 74, Centro, 011-52/55-5512-2522, pasteleriaideal.com.mx, pastries from 25¢.

14. The best view $3 can buy
Just above the wood-paneled Librería Porrúa downtown, El Mayor, a sunny rooftop café bordered by succulents, provides a crowd-free vista of the Aztec-era Templo Mayor and the bell towers of the 18th-century Metropolitan Cathedral. Take it all in for a minor fee: the roughly $2.75 cost of a michelada, beer spiked with lime, salt, and, often, spices. República de Argentina 15, Centro, 011-52/55-5704-7580, porrua.com/elmayor.

15. A gourmet meal at a taco-stand price
Get beyond the school-cafeteria vibe and you'll see that Café Azul y Oro, in an institutional 1970s-era building on the campus of the Universidad Nacional Autónoma de México (UNAM) in Coyoacán, serves some of the best meals—and deals—in town. Food writer and chef Ricardo Muñoz Zurita is on a mission to make high-minded food affordable to students (and anyone who values taste over atmosphere). With dishes like salpicón de venado, a vinegar-laced venison salad, and duck ravioli stacked in a pyramid and strewn with blackberries and mole sauce, you'll eat as well as you would at any of the city's top restaurants—all for well under the $15 mark. Insurgentes Sur 3000, Ciudad Universitaria, 011-52/55-5623-3500 ext. 1065, entrées from $6.50.

16. You never know what's hidden in an office building
Walk through a perfume shop, up three flights of stairs, and down a deserted, fluorescent-lit hallway to find the capital's best source for native handicrafts. Founded in 1944 by artist Víctor Fosado Contreras, Víctor Artes Populares Mexicanas is now run by his daughter, Pilar Fosado Vázquez. She stocks colorful, museum-quality pieces, such as beaded Huichol bowls from Jalisco, papier-mâché Day of the Dead dolls from Guanajuato, and hand-painted glass pitchers from Puebla. Francisco I. Madero 10, Suite 305, 3rd Fl., Centro, 011-52/55-5512-1263, artespopularesvictor.com.

17. Unparalleled people-watching
The patio tables at Vucciria, an Italian restaurant across from the Parque México, look out on a compelling weekly parade: yuppies in Barbour coats walking Weimaraners, hipsters in skinny jeans, fashionistas with messy hair tottering by in heels. Get there by 3 p.m. on a Sunday to score a spot and settle in for an afternoon of grazing on carciofi fritti, a perfect cure for taco fatigue. México 157, Hipódromo Condesa, 011-52/55-5564-7441, entrées from $10.

18. The other flea market
You could easily skip La Lagunilla, the famed blocks-long market, in favor of the weekend stalls at Plaza del Ángel, set up in the arcades of a Zona Rosa shopping plaza. Easier to manage, it's the go-to spot for many of the city's antiques dealers, who come for the wildly varied selection of antiques and pop culture souvenirs, from lucha libre piggy banks and busts of Aztec princes to folding wooden klismos chairs. Arrive by 10 a.m. to get a shot at the good stuff. Londres 161, Zona Rosa.

20. The Mexican Starbucks
A café, gallery, and bookstore in a century-old town house, Conejo Blanco is a popular meet-up spot for all, including families drawn to the former nursery for its fitting focus on kids' books. Ámsterdam 67, Hipódromo Condesa, 011-52/55-5286-7430, coffee from $2.

On Foot As in any urban environment, it pays to take commonsense precautions in Mexico City. Be aware of your surroundings, avoid walking alone at night, use ATMs inside banks during business hours, and leave the flashy jewelry at home.

By Cab Outside of their own local shopping districts, residents don't really walk. Fortunately, taxis are cheap and plentiful. Just avoid hailing, as rogue drivers have been known to mug their passengers. Instead, call a taxi de sitio (one from a private company). Taxi Mex is among the best, with metered cars, quick pickups, and registered drivers (whose license and photo should be on display). 011-52/ 55-5634-9912, taximex.com.mx.

In a Rental Car One of the secrets of driving in Mexico City is knowing when not to do it—specifically, on Fridays. Weekends unofficially begin Friday afternoon, and many office workers take off after lunch. Three-hour snarls are an unfortunate probability—even more painful if you're heading to the airport to catch a flight.

On the Subway For the times when driving isn't recommended (or even an option), there's a handy Metro system. But be aware that train cars and platforms can be a hotbed for pickpockets and petty criminals. www.metro.df.gob.mx, 25¢ one way, including transfers.