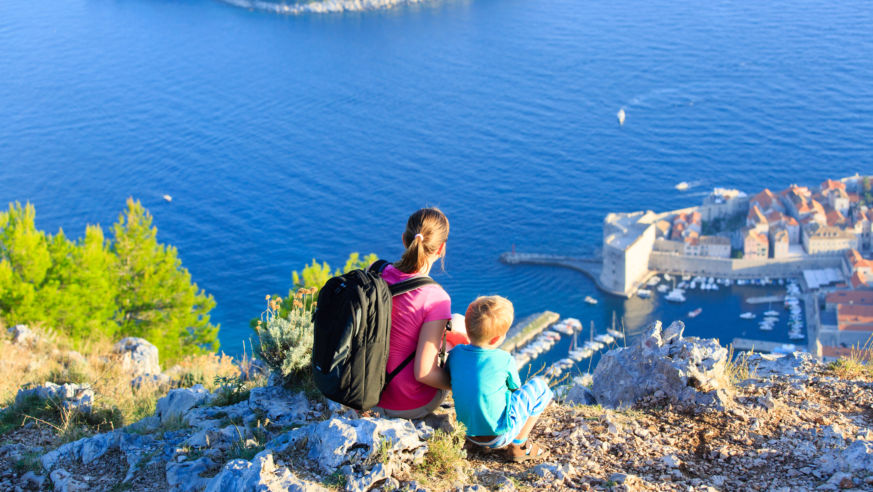 There should be a special award for mothers who travel with small children. Boarding planes, tears, the constant search for bathrooms, the ever-present possibility (or, rather, likelihood) of things lost, broken, spilled. One traveling mom tells us in no uncertain terms why she'll do it all again. And again and again.

“Please. Please, just try for Mommy,” I said, kneeling on the airport bathroom floor next to my three-year-old. She whimpered again, tears in her eyes, terrified of the automatic flush. I knew she had to use the toilet, and we were 15 minutes from boarding. This was not how I had pictured the start of my first family vacation.

When I had announced my plans to travel with my husband and two children, ages 3 and 5, from New York to Colorado for a week-long family reunion, I received mixed reactions from friends. There were those who told me I was crazy to travel with young children, and those who said we would make memories to cherish forever.

“Just…lower your expectations,” came the sound advice of one level-headed friend, who had traveled around the world with her own kids. I knew it would be difficult; my children had never been on a plane, and it was a long flight. We would be staying in a house with five other families, including five grandparents and seven children under the age of 6. But it was in the heart of the Rocky Mountains. Perhaps a once-in-a-lifetime opportunity to have all of my side of the family together in one place. How could I say no?

But now, here I was, kneeling on the cold tile floor, texting my mommy friends for moral support. “Do you have any Post-it notes in your purse?” a friend asked, noting they were excellent for covering automatic flush sensors. Who carries Post-it notes in her purse? Finally, I pulled out the parent’s last remaining resource: bribery.

One pink vinyl Hello Kitty wallet from the airport gift shop later, my daughter used the toilet and we were good to go. Next stop: Denver!

I have been blessed with well-behaved children, so I was not overly concerned about the flight. It was mostly a matter of keeping them occupied for the duration. We had loaded the iPad with Dora the Explorer episodes, brought snacks and games, and then my husband and I became the in-flight activity directors. “All right, I got this,” I thought, proud of myself for the foresight to consult Pinterest before packing for the trip. I had it all: coloring books, Wikki Stix, peanut butter crackers, and gummy bears. At the end of the flight, the generous pilot invited the kids to sit in the cockpit, and we took two of the best pictures of our trip: the kids flying the plane. They were elated.

“This is so much fun,” I thought. That is, until we got to the car rental place.

Anyone who has children knows that there are only so many hours you can ask them to sit still. After a four-hour flight, hanging out for two hours in the lobby of a rental car office is not a lot of fun. There had been a mix-up at the rental office and we were stranded until our car arrived. Thus began the whining.

When we finally arrived at our destination, we had been on the road for more than 12 hours.

“Remind me why we did this again,” I said to my husband. He looked at me with bleary eyes after driving two hours from the airport on winding mountain roads in the hot afternoon sun. Poor guy, I thought. This isn’t even his family. Had I brought everyone out here, halfway across the country, to be miserable?

And then we saw the mountains. And the elk.

Nothing quite beats the look of astonishment and wonder in your children’s eyes when they see something new for the first time.

“There’s snow, Mama!” shouted my son, pointing at the peaks of the Rockies. “But it’s summertime!”

“Look at that big deer!” my daughter said, eyes wide, as she gazed at a 700-pound elk, its antlers like a majestic tree. They ran to the fence to peer over at the huge animals.

Although we took hundreds of pictures during our weeklong stay in Colorado, there are a few that remain etched in my memory, one being that day we arrived, their small lithe bodies leaning over the fence, eager to catch a glimpse of the new landscape. It will stay with me forever.

By day, we hiked in the lower trails of the mountains, waded in cold mountain streams, watched a cowboy parade, and explored the local playground. At night we ate huge family dinners, and my children got their first taste of what it means to sit at the “kids’ table” together with the children of my cousins, slurping spaghetti and telling knock-knock jokes.

Yes, they stayed up too late and then threw tantrums because they were tired. They ate too much sugar and bumped their heads, claiming it was another cousin’s fault. It was loud all the time, children shrieking, parents laughing, people banging pots and pans and dropping glasses and shouting over board-game victories. There were several temporarily “lost” dolls and even one trip to the emergency room, but there were also new cowboy hats and several trips to the ice cream shop, elk sleeping in the front yard, and, it bears mentioning more than once, THE ROCKY MOUNTAINS.

As we flew home and I reflected on the trip, I remembered an essay I’d once read about Christmas by the writer Robert Fulghum, who says that Christmas “[is] just real life—only more of it all at once than usual.” Maybe that’s what traveling with children is, too. Fulghum writes: “And I suppose we will continue doing it all. Get frenzied and confused and frustrated and even mad. And also get excited and hopeful and quietly pleased. We will laugh and cry and pout and ponder… Hug and kiss and make a great mess. Spend too much. And somebody will always be there to upchuck or wet their pants…” Oh, yes.