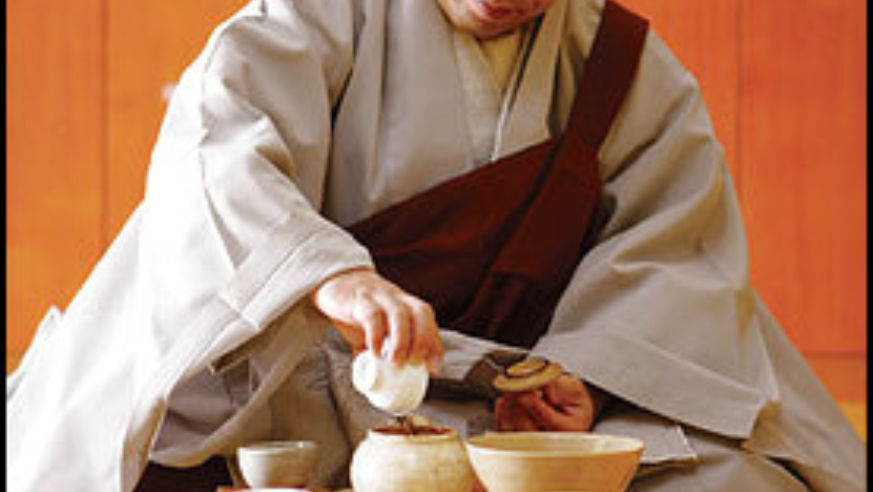 Be a monk for a day at the Lotus Lantern monastery in South Korea.

As the nighttime thrum of crickets rises and falls on Ganghwa, an island in the Yellow Sea 25 miles west of Seoul, I'm summoned by a wooden percussion instrument to peel myself up from my padded mat and prepare for the morning's chants. I clumsily suit up in the cotton "dharma clothes" that have been provided (rough cotton pants, T-shirt, and smock) and wonder if a monk brushes his teeth before chanting. I decide he does. I also decide that 3:40 a.m. is far too early to wake up when one is on vacation.

In an effort to learn about an important part of Korean culture, I've signed up to be a monk for a day at Lotus Lantern, a monastery that's home to international monks of Jogye, the main order of Korean Buddhism. An influx of visitors for the 2002 World Cup prompted the South Korean government to ask temples to open their doors--and they've stayed open, thanks to popular demand. Currently, 43 temples welcome overnighters, and five offer translation services in English (templestay.com describes each one). There's a participating temple in Seoul, but Lotus Lantern is the closest one in the countryside; it's an hour's trip from the Seoul subway, which includes a $4 bus and a $5 taxi ride to the grounds. Although the programs differ slightly from temple to temple, most last 24 hours, start in the afternoon, and are designed to introduce visitors to the basic tenets of Buddhism.

Following the morning wake-up call, we drag ourselves into the Buddha hall, filled with hundreds of paper lanterns lit by electric bulbs. I kneel with a handful of fellow travelers behind three monks leading a ceremony called yebool, in which they chant a rhythmic chain of devotional sutras, broken by repeated bows. Guests are given a phonetic transcript to join in, but I choose just to listen to the monks as they cycle through a mantra 108 times; it takes about 20 minutes, and I pass the time by awkwardly mimicking their bows. The monks fold their mats and turn off the lights. We return outside to the darkness, underneath a blanket of stars. It's a little past 4 a.m.

Perhaps sensing my grogginess, Ok Kyung Chang, the Lotus Lantern's director of temple stays, reminds me why we're up at such an unfortunate hour. "The mind is at its clearest, its most focused," she says. And thus, it's a perfect time for juaseon, or sitting meditation, the next activity. In another hall, we're instructed to sit in the lotus position, facing open windows that look out at the forest. Time passes in silence. I can't claim enlightenment--a determined mosquito blocks my path--but nevertheless I feel at peace. Outside, the dawn sky has brightened over the rice paddies.

Then we eat. The three-meal temple diet consists mainly of organic vegetables grown on-site and prepared simply, with soy sauce, sesame oil, and seaweed, and served with kimchi and rice porridge. The quarters are about as austere as the food. Rooms are outfitted with traditional Korean bedding: a yo, a padded mat, and a begae, a firm, husk-filled pillow.

In the early afternoon, we're guided through a traditional Korean tea ceremony called da-do; monks believe tea sharpens the mind for meditation. We learn the method of preparing Korean green tea at the correct temperature--slightly warm--and are taught the etiquette of serving and drinking. Each cup is taken in three sips--one each to observe color, fragrance, and taste. And since work is an important part of the monk's day, after having our tea we'll be asked to pitch in with garden chores (today's duty: picking red peppers).

Between ceremonies, we can walk around the mountains or meditate in one of the halls. I use the time to talk with the monks and my fellow visitors. While some travelers may find a stay understimulating, Karla Vogelpohl, visiting from Germany with her husband, relished the real-life encounter. "A friend in Korea knew of our interest in Buddhism and suggested we come," she says. "We feel integrated here, like we're not seen as strangers." 011-82/10-8739-3858, lotuslantern.net, $38.