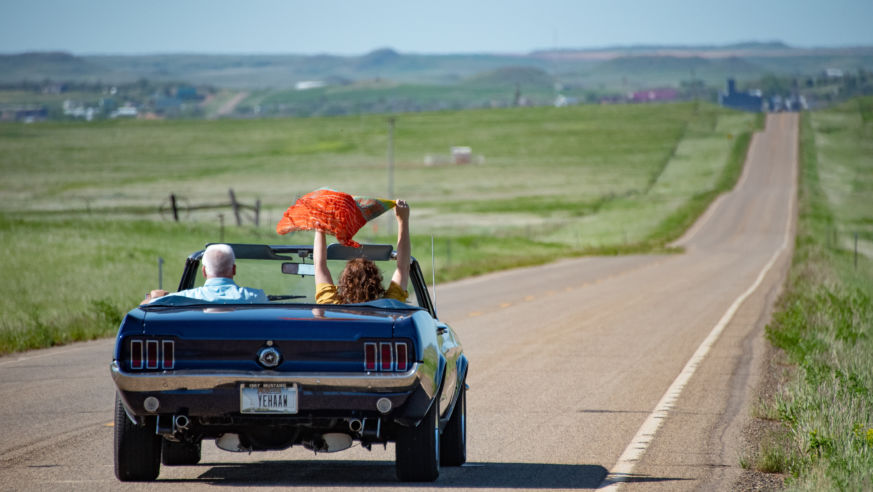 Southeast Montana is packed with gorgeous and historic attractions.

If your idea of a road trip is wide open spaces and light traffic, then Southeast Montana is calling your name.

Interstate 94 and 90 are ideal for cruise control with long stretches of highway straight as an arrow. The prairie landscape goes on forever, dotted with cattle, crops, and badlands as you cruise along Interstate 94 and 90 in Southeast Montana. Break up the drive with stops at national monuments and state parks, not only to stretch the legs but to discover the fascinating stories that shaped the West.

This corner of Montana has been home to prehistoric people, dinosaurs, homesteaders, and one epic battle between the U.S. Army and Native Americans fighting to preserve their way of life. The gateway to these parts is the city of Billings. The pace of life is slower in these parts of Big Sky Country – enjoy the ride!

Start your journey in Billings, armed with a picnic lunch, then head east 30 miles on I-94 to Pompeys Pillar, a sizable rock outcropping. You’ll see first-hand the only physical evidence of the Lewis and Clark Expedition from their epic two-year journey to the Pacific Ocean from St. Louis. Part way up this 200 ft. high sandstone rock, Captain William Clark carved his name and date, July 25, 1806. Clark named the rock “Pompy,”a nickname he had given to the son of Sacagawea, the only woman to take part in the expedition. A boardwalk leads to the top of the rock for sweeping views of the Yellowstone River and valley and a chance to view Clark’s signature. The interpretative center is a must stop to learn about this grueling journey. Picnic under shaded cottonwood trees adjacent to the mighty Yellowstone River, the same waterway Clark and his men would utilize on their return trip via dugout canoes.

Continuing east on I-94, dinosaur lovers will delight in Makoshika, an 11,538-acre badlands park located within a stone’s throw of the town of Glendive. The word Makoshika comes from a Lakota Indian phrase, meaning ‘bad land’ or ‘bad earth.’ Imagine hiking over the playground of Tyrannosaurus Rex and Triceratops. Back in 1889, a researcher scouring the area by horseback documented 500 triceratops skulls. The topography, from cap rocks, hoodoos, wrinkled hillsides, deep ravines, and boulders tossed about, begs to be photographed, especially at sunrise and sunset. With over 12 miles of trails, crowds will not be a problem in Makoshika. If your journey is via a motorhome or more adventurous with a tent and sleeping bag, this is the place to spend the night with both designated camping sites as well as backcountry camping. Add to this birding, an archery site, disc golf course, summer programs for kids, an amphitheater, mountain biking, visitor center, scenic drives – Makoshika has you covered!

It’s a bit off the beaten path but worth seeking out this otherworldly gem. To reach Medicine Rocks, exit I-94 at Wibaux, then head south on Hwy 7 for approximately 70 miles, passing through the town of Baker. The entrance is clearly marked. The area is characterized by sandstone rock formations, thousands of years in the making, shaped by wind and water, and peppered with holes and caves. It was a vision quest site for Native Americans, who would camp and scour the landscape for buffalo. Charging Bear, a Sioux Indian, described the site as a place “where the spirits stayed, and the medicine men prayed.” Their stories remain in the petroglyphs carved into the rocks. Cowpunchers and settlers of the old west left their names carved into the rocks as well. Don’t be tempted to carve your name on the rocks, as its both illegal and degrades this historic site. Hike it and camp it, and keep your eyes peeled for mule deer, antelope, and sharp-tailed grouse.

Some say there are days when you can hear the war cry of the Lakota and Cheyenne Indians riding into battle against the U.S. Army back on June 25-26, 1876. Often referred to as Custer’s Last Stand, it was one of the last armed efforts by the Plains Indians to protect their land and culture. By the end of the bloody battle, Lt. Col. George Armstrong Custer, along with over 260 men, would lose their lives. Between 60-100 Native Americans were killed, according to estimates. The Little Bighorn Battlefield memorializes the site of the battle. Interpretive signage along the 4.5-mile drive provides an insight into how the action unfolded. The road ends at the Reno-Benteen Battlefield, where additional troops, under the direction of Major Reno and Captain Benteen fought. A visitor center, museum, and Indian memorial, along with a national cemetery, make up the complex. In addition to the drive, walk the Battlefield on the various pathways scattered around this historic site. The Battlefield is 65 miles southeast of Billings on I-90.

Think back 2,000 years and imagine prehistoric people painting on the walls of one of three caves at this historic state park. Little did these artists know, working in black and white pigments, they were creating a history book of sorts for future generations to understand life in ancient times. Later images, estimated to be 200-500 years old, were created with red pigment and featured rifles, horses, and other animals. The park is a short 15-minute drive from Billings on Coburn Road. The park is day use only and makes for a sweet spot for picnicking. Check out the visitor center and gift shop. Bring binoculars to get an up-close look at the pictographs. Those keen on birding should be amply rewarded with sightings at the park.

It’s a 40-minute drive via Hwy 416, then 418 to Chief Plenty Coups State Park, the home and farmstead of one of the great leaders of the Crow Tribe. Chief Plenty Coups started as a Crow Warrior, but through his visions, could see the white man taking over the Crow land. He felt it best to adapt and work with the whites so the Crows and their culture could survive. His wisdom and leadership would result in him being appointed chief of the Apsáalooke (Crow) tribe by age 28. He became one of the first Crow to own a farm and work the land on the Crow Indian Reservation. His efforts to bring harmony between his culture and that of the white people resulted in Plenty Coups being honored by his people as their last traditional tribal chief upon his death. If your visit coincides with their Annual Day of Honor, this year falling on August 31, you can enjoy a free buffalo feast.