Movie Quest: George Clooney is "Up in the Air" 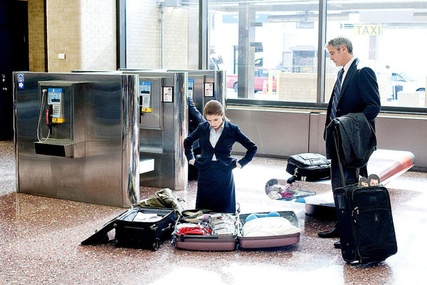 George Clooney's latest movie, "Up in the Air," opens Friday in a dozen cities before a nationwide release on Christmas Day.

Armed with his usual charisma, Clooney plays Ryan Bingham, a layoff specialist who travels a staggering 322 days a year. He has perfected the art of packing a carry-on bag, getting through airport security, and collecting membership points from companies like American Airlines, Hertz, and Hilton—all to benefit his goal of hitting 10 million frequent-flier miles.

Moments after Clooney meets Alex, the woman of his dreams played by Vera Farmiga, they flirt by pulling out their membership cards and comparing miles, points, and other status milestones.

Here at Budget Travel, we've long said you should join free rewards programs, but now do you believe us? George has spoken.

That said, don't be fooled into thinking that the movie is a pure romantic comedy. It definitely is not. I watched a special advance screening of the movie last night, and there was nothing funny about how Clooney's character "downsizes" employees. Apparently the "actors" are real people who were recently laid off. Whenever they speak, you can tell they're reliving the moment they were told to pack up. It's heavy stuff, even for George Clooney to handle.

Hilton came on board as a marketing partner after learning that location scouts were scoping out the St. Louis Airport hotel. In several scenes, Clooney wears nothing but a white Hilton bathrobe (hiltontohome.com, $80).

Says Andrew Flack, Hilton Hotels' vice president of global brand marketing. "We liked what the movie was doing. Many life-changing things happen on journeys. And back in 1959, Hilton invented the airport-hotel concept."

Many scenes were filmed in the rooms and public areas at the Hilton St. Louis Airport (rooms from $129), Hilton St. Louis at the Ballpark (from $159), and Hilton Miami Airport (from $139) hotels. Clooney not included. 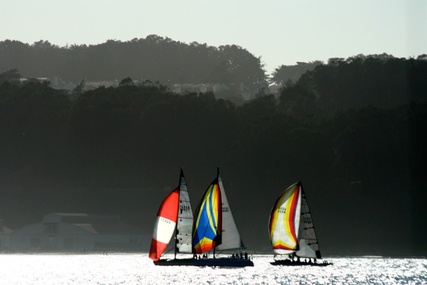 San Francisco is a beautiful city, as reader photos in my Budget Travel will show you. Tom Stienstra, an outdoors columnist for the San Francisco Chronicle, has listed his top 10 spots to see and capture the best bay views. The spots are reachable via car or on foot; many are the culmination of hikes or bike rides. One that caught my eye was Hawk Hill in the Marin Headlands, where you can see the Golden Gate Bridge and, through early winter, migrating raptor birds. Stienstra calls it "one of the best spots for photos in California." Naturally, many of the Chronicle's readers responded; see their suggestions here. More on San Francisco 20 Photos: San Francisco, My Cut Openings: The Walt Disney Family Museum Where to eat and sleep in San Francisco?

To the barricades! A labor strike threatens to shut down popular museums in the French capital. Already, The Pompidou Center, which is the second-most-popular Paris museum after the Louvre, has been closed since November 23. Workers walked off to protest a government plan to reduce cultural spending. This plan, part of President Nicolas Sarkozy's effort to make cultural institutions "more efficient," entails replacing only one out of every two retiring civil servants. The proposed initiative would affect institutions across the country, but the potential impact at the The Pompidou Center is more severe because more than 40 percent of its staff are already above the age of 50. Beyond the modern art center, strikes are a real possibility at attractions across the country. Seven different unions are threatening to launch a major strike on December 2 if their demands are not met by the Ministry of Culture. In an interview with the AFP, one union leader warned that "all the major establishments are concerned," including the Louvre, Versailles, the Mus&eacute;e d'Orsay, Notre Dame, and Mont Saint-Michel. We'll be watching the situation closely and updating readers about what is (and isn't) open. EARLIER Paris: Museums for free Practical Paris: What's closed on Sundays, Mondays, and Tuesdays? 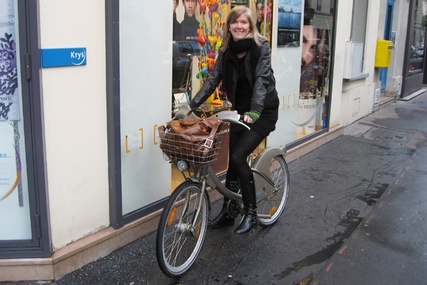 Paris: Tips on renting a bike

In Paris last week, my fianc&eacute; and I really felt as if we were living like the locals. We sipped our espresso at the bar each morning and strolled hand-in-hand through the Luxembourg Gardens. But the most fun&mdash;and possibly most Parisian&mdash;thing we did was to crisscross the city using V&eacute;lib, which roughly translates as "free bicycle." (It's a euro per day for a subscription, and any rentals under 30 minutes are free.) The city is utterly different when viewed on two wheels. We felt especially chic on the day we filled our little chrome bike baskets with Clementines from the market on Rue Mouffetard. Earlier this year, my colleagues at Budget Travel recorded a video of how to rent a bike in Paris. But I learned some additional lessons while cruising around. &bull; Tip: When a bike is defective (because its gears won't shift or it has some other flaw), a Parisian will typically turn its seat backwards as a signal to others not to use it. &bull; Try your AmEx card. This blog has previously reported that most American credit cards don't work at V&eacute;lib kiosks&mdash;the stands at each station that unlock available bikes. The typical European credit card has a microchip rather than a magnetic strip, but lucky for us, American Express Blue cards run on the chip system. On our first morning, we signed up for a one-day subscription in minutes using our AmEx Blue. &bull; Take the road less traveled by staking out a non-conventional route. We were staying fairly far down on the Left Bank, and each morning we'd bike up to the river, only to be met with V&eacute;lib stations that were at capacity. If all the spaces at one station are full, the kiosk screen will direct you to the nearest station with open spots, but we found this information wasn't always accurate. More than once we trudged from station to station looking for two spaces&mdash;a slightly deflating way to end an otherwise exhilarating ride. It seemed like most bikes were ditched at stations lining the river, but if you can start there and bike outward, you're sure to find plenty of working bikes and end with plenty of empty spaces. &bull; Think about V&eacute;lib rush hour. It seemed like the times we were looking to turn our bikes in&mdash;typically right around the time sidewalk caf&eacute;s started to fill up&mdash;everybody else was returning their bikes, too. &bull; Parts of the city (around Canal St. Martin and down toward the Bastille, for instance) have gloriously divided bike lanes that are scenic and peaceful. In other parts of the city, though, one-way streets and bike lanes that double as bus lanes make it hard to get around. On one trip, we were yelled at by a French grandma and nearly barreled down by a bus. Let's just say that from then on, we mapped out our trips beforehand. As noted in Budget Travel's video, you can download a free map of the Paris bike routes. EARLIER Video: How to bike in Paris Our Paris City page

You impressed us with your fantastic photos of Australia. We picked 18 shots, including rugged Uluru in the Northern Territory, the stunning Great Ocean Road, and multiple angles of Sydney's iconic Opera House (there's even a peek inside). See for yourself in our slide show. RECENT READER SLIDE SHOWS Nighttime Photos | France | Rainbows