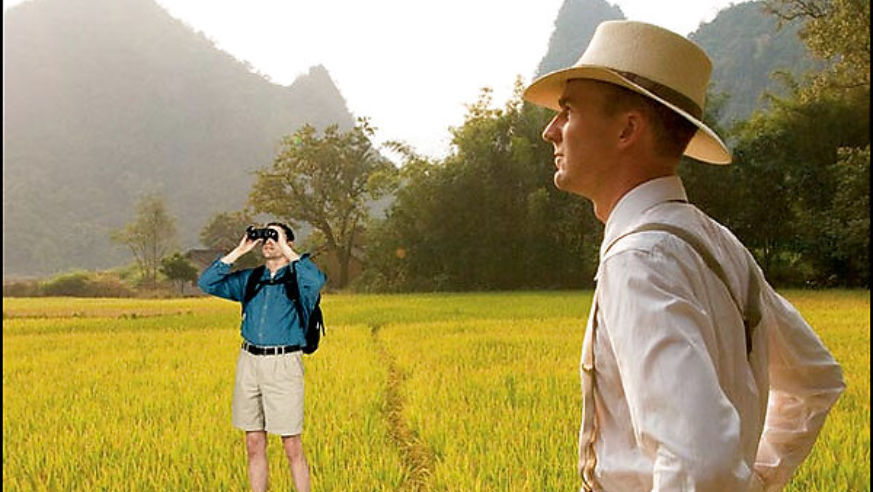 Outstanding in its field: The Painted Veil

Every year we pick the year's most travel-inspiring movies--and what a year it was! 'Flightplan,' 'Babel,' 'Poseidon,' 'Snakes on a Plane'....Oops, wrong list.

Magic Castle Eisenheim wows with a trick inspired by King Arthur at Dobris Chateau (011-420/318-521-240, semova@zamekdobris.cz, by appointment, $8). From Prague's Andel station, take a bus toward Príbram.

The Hunting Lodge The royal hunting lodge is Konopiste, in Benesov. The train ride from Prague's Hlavni Nadrazi station, toward Tabor (get off at Benesov) is an hour long (011-420/317-721-366, zamek-konopiste.cz, tours $8-$14, closed Mondays, open April to November).

Sydney Pollack's documentary delves into the mind and architecture of friend Frank Gehry. "I'm not sophisticated about architecture, so I don't look at it intellectually," says Pollack. "The buildings I get speak to me on an emotional level." Here are his three favorite Gehry buildings:

Vitra Design Museum "Vitra was the last building Frank did before discovering the computer," says Pollack. "He was playing with the same shapes that he later was able to have breakthroughs with." It's in Weil am Rhein, Germany, a 15-minute ride on bus #55 from Basel, Switzerland; the bus stops right outside (011-49/7621-702-3200, design-museum.de, $10).

Robert Langdon (Tom Hanks) gets called to the Louvre, where he meets cryptologist Sophie Neveu (Audrey Tautou); they're soon on a hunt for the Holy Grail. The adaptation of Dan Brown's bestseller was shot in England, Scotland, Malta, and France.

Smart Driving Langdon and Neveu flee the Louvre in a Smart car and halt before the U.S. Embassy at Place de la Concorde. Rent your own Smart from Avis at Charles de Gaulle airport or Parking Saint Sulpice in the 6th arrondissement (800/698-5674, avis.com, from $667 for five days).

Wrong Turn At Temple Church off London's Fleet Street, built by the Knights Templar, Langdon and Neveu find effigies--as well as some unwelcome company. The Master of the Temple gives free talks on his Da Vinci-related book on select Fridays (011-44/20-7353-3470, templechurch.com, $7.50).

The Reunion Rosslyn Chapel, where Langdon and Neveu part ways, is in the countryside seven miles south of Edinburgh. Appropriately enough, enigmatic Masonic and Rosicrucian carvings cover every cranny of the 15th-century structure. The chapel is open daily and holds Episcopalian services on Sundays (011-44/131-440-2159, rosslynchapel.org.uk, $13).

Unlucky in love, two women--Amanda (Cameron Diaz) and Iris (Kate Winslet)--swap houses for a fortnight. Their luck changes. (To be released December 8.)

House Swapping The website where the characters meet, HomeExchange.com, has more than 12,000 listings the world over. Two more companies worth a look are Intervac.com and HomeLink.org.

Based on the 1925 novel by W. Somerset Maugham, The Painted Veil follows an unhappy English couple, Walter (Edward Norton) and Kitty Fane (Naomi Watts), as they navigate life in cholera-ridden China. (To be released December 15.)

A Beautiful Beginning The craggy mountains in the opening scenes are unique to the northeastern quarter of Guangxi, a region in southern China. Location scout Aaron Shershow says that the best way to explore the area is with a guide and a car from the city of Guilin, which starts at $80 per day.

The Village Huangyao, also in Guangxi, is "the best-preserved town I've seen in China," says Shershow. The Fanes travel there by sedan chair, but these days you'd hire a car and driver/guide out of Yangshuo (four hours, $240 round trip), or Guilin (six hours, $320).

More Potter Spots For a rundown of other Potter-related attractions in the Lake District, check out the guide put together by VisitBritain (visitbritain.com/misspotter).

When he inherits his uncle's Provençal vineyard, financier Max Skinner (Russell Crowe) goes to visit. Like many Brits who head south in the movies, he learns to re-prioritize.

The Vineyard The film was shot primarily at Château La Canorgue, a vineyard in Bonnieux (011-33/4-90-75-81-01, open for tastings year-round). Location supervisor Marco Giacalone says it has "the best rosé in France."

A Long Drive Skinner gets lost while driving a Smart car (see The Da Vinci Code, above, for rental info in Paris; the cars are available from Europcar at Marseille's airport, seven days $650). In reality, the roads are well marked, and the drive to Bonnieux from Marseille's airport shouldn't take longer than an hour.

First Kiss Skinner and Fanny Chenal (Marion Cotillard) share their first kiss in Cucuron, a medieval village located at the foot of the Grand Luberon Massif. Cucuron is 20 minutes southeast of Bonnieux.

The sequel to L'Auberge Espagnole, a 2002 movie about young expats in Barcelona, takes place in Paris, London, and St. Petersburg; it offers a more realistic, everyday Europe than we usually see in films.

The Perfect Street In St. Petersburg, Xavier (Romain Duris) muses about perfection on "the street of ideal proportions:" Rossi Street, 220 meters long and 22 meters wide, and lined by buildings 22 meters high. It's directly behind the Alexandrinsky Theater; the nearest metro station is Nevsky Prospekt/Gostiny Dvor.

Eurostar The scenes where Xavier bops between Paris and London were filmed on the Eurostar train. The trip takes about three hours and starts at $75 one way (eurostar.com).

The English Pub Xavier and Wendy (Kelly Reilly) hang out at the Sir Richard Steele Pub in northwest London. "It's known for having a musician's heritage," says assistant producer Lee Thomas. The pub is two minutes from the Chalk Farm Tube station, and 10 minutes from the Belsize Park station (97 Haverstock Hill, 011-44/20-7483-1261).

Royal Treatment The Port Royal scenes were shot at Wallilabou Bay, on St. Vincent, where you can explore what's left of the set, including the 17th-century-style village. "We traveled by boat because it was faster than taking the little roads," says production supervisor Tom Hayslip.

Village of the Damned The cannibal village was in Soufrière on Dominica. Other featured spots are Titou Gorge, Hampstead Beach, Pagua River, and Londonderry Bay. Jungle Trekking Adventures and Safaris runs a full-day "Trailing the Pirates' Treasures" tour (767/440-5827, experiencescaribbean.com, $110, $55 for kids under 12, includes lunch).

The Beaches The Exumas were used for their beaches and Grand Bahama Island for its water. Fantastic Powerboat Adventures has day-long tours from Nassau to the Exumas (powerboatadventures.com, $190, $120 per child). On Grand Bahama, the crew stayed at the Sheraton Grand Bahama Island Our Lucaya (866/716-8106, ourlucaya.com, from $129).

In Sofia Coppola's biopic, the last queen of France (Kirsten Dunst) is a bored teenager trapped in the etiquette of the royal palace of Versailles, who entertains herself with exquisite clothes and hairstyles.

Versailles One-day passes to all of Versailles, including several audio guides, begin at $20 (chateauversailles.fr, closed Mondays). Skip the lines by buying tickets in advance at Fnac record stores throughout France (fnacspectacles.com), or by using a combo round-trip train ticket and one-day pass sold at Paris-area SNCF train stations or the Carrousel du Louvre, from $26.50.

Masked Ball The wild party in Paris that Marie Antoinette and Louis XVI (Jason Schwartzman) attend occurs on the grand marble staircase and lobby of the Palais Garnier, home to the Opera National (011-33/1-72-29-35-35, operadeparis.fr).

The Birthday Party The scene in which the queen gambles all night was shot at the Hotel de Soubise in Paris, a museum for the history of France and the National Archives (60 rue des Francs-Bourgeois, 011-33/1-40-27-60-96, closed Tuesdays). Admission is free, except during temporary exhibitions--such as one of Marie Antoinette's letters and mementos, until January 8--when it costs $4.

Eye Candy The film's palette was influenced by the macaroons from Ladurée (locations in Paris, London, and Geneva, laduree.com).