Neil Mandt traveled the world to shoot his latest film, Last Stop for Paul, on a budget of $50,000. Today, it debuts on screens at the Laemmle Sunset 5 in Los Angeles and the AMC Broadway 4 in Santa Monica. Tickets are for sale at LastStopForPaul.com.

Earlier, BudgetTravel.com did an interview with the director about his budget travel tips.

Should a flight be canceled if only five passengers are on it? American Airlines decided to go ahead with the Chicago-Heathrow flight on February 8, and now environmentalists are giving them flak. On one hand, it seems like a lot of fuel to burn for five people (but lucky for them); on the other, American says it had to get the plane to London for its next flights, and to cancel it would've been disruptive. What do you think? If you'd been on the flight, would you have felt guilty?

Should airports censor what you can read on WiFi?

"Denver International Airport officials are erring on the side of caution in blocking access to certain sites through the free Internet browser offered to fliers," according to the Denver Post. Websites such as SportsIllustrated.com, VanityFair.com, and BoingBoing are blocked because the airport's content filters are set aggressively to prevent anything that might be construed as objectionable content. UPDATE 3/10: I originally wrote "Story first broken by former Talking Heads front man David Byrne, on his blog." But the blog Jaunted had the first whiff of the story (see comments below)...though David Byrne and Boing Boing did advance the story. EARLIER Congress considers filtering airplane movies. Airlines as media publishers. 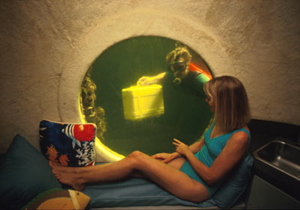 Hotels Underwater: Sleep with the fishes

The world's first and only underwater inn is the Jules' Undersea Lodge in Key Largo, Fla. Guests scuba dive about 20 feet to enter the inn, which is a converted naval station. You enter through a pool and an air lock; once inside, you breathe and walk around normally. At night, escaping air creates a soothing, bubbling sound that is supposed to encourage your body to have an astonishingly restful sleep. Typical rate is $375 a night, per person. As a rule, only certified divers can visit. But, for a fee, you can learn enough about diving to qualify to float down to the entrance. And for an extra charge, you can get an advanced diving certification during your stay. Breakfast and dinner are served at set times. The lodge typically hosts two couples. (jul.com) Multi-room underwater hotels may be on the way. Four companies claim that they will open hotels underwater within the next few years in Fiji, Istanbul, Korea, and Dubai.... HotelChatter has been tracking many of these announcements and doesn't believe a word of them. Even if the hotels do materialize, they won't be for budget travelers. Room rates will start at about $1,500 a night. Here's some info on these proposed hotels...[UPDATE Apr. 10: This post originally showed images of these underwater hotels.] What: An underwater, seven-story hotel in Istanbul. Not yet officially named. Where: Beneath the city center.[CORRECTION 3/25: This blog post mistakenly said Istanbul is the capital of Turkey. I regret the error.] Every room will have views of the ocean. When: 2010 (supposedly) Rate: $1,500 a night, and up Name: Poseidon Undersea Resort What: 24 rooms, about 40 feet below the surface of a lagoon. Designs keep shifting; according to a recent layout, the site will include a lagoon, an airstrip, and an elevator that will descend from the surface, beachfront bungalows to the underwater suites. Where: Off the coast of Fiji When: 2009 (supposedly) Rate about $2,100 a night, but you'll probably have to book a package, such as $30,000 for a couple sharing a room for two nights, plus a five-night stay at a related resort above water. Name: Hydropolis Underwater Resort What: Designed and built in Germany, it will be taken apart, moved to the waters off Dubai, and then rebuilt underwater into two parts: one part on the sea ground, and the other floating in the sea. Where: 27 acres of seabed in Dubai When: 2009, supposedly Rate: Expected to be more than $1,000 a night. Not yet announced. Name: To be announced, once it receives government approval What: A luxury hotel 65 feet under the sea surface, with 200 suites. Where: Gyeongju, South Korea, about 500 miles southeast of Seoul When: 2015 Rate: To be announced.

This winter, the Caribbean island of St. Lucia changed the way it collects its departure tax. Up until now, you had to keep $26 in U.S. cash on hand during your trip to pay at the airport on your way out of the country. But now, when you buy a ticket, the tax is automatically added. (Note: For the handful of folks who bought tickets last year for travel this year, you still have to pay the tax at the airport on departure.) As you may know, many countries in Latin America, Asia, and Africa expect you to pay a departure tax when you check in at their airports. Some countries insist that you pay in the local currency; others in U.S. dollars. Some let you pay at the check-in gate. Others, such as Argentina, require you to go to a separate counter and pay. I don't know about you, but I much prefer to pay a tax when I buy a ticket with a credit card. That way, I don't have to remember to save exact change in U.S. dollars to pay the tax at the end of my trip. I also prefer to have the total cost of the flights be clear up-front, to help me with my budgeting. Do you have any thoughts about travel taxes? Feel free to post a comment.