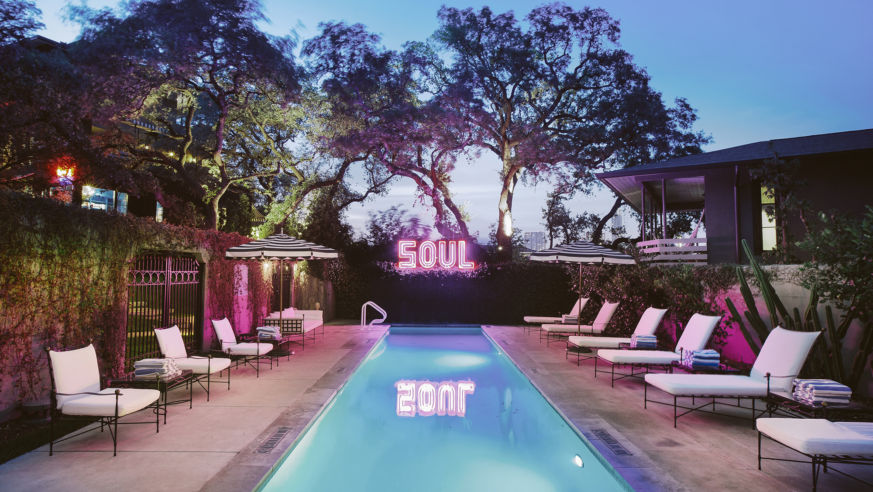 From Seattle to Boston and points in between, these music-themed hotels let you live out your rock'n'roll fantasy—or country or jazz or grunge.

These days, there’s a hotel out there playing your song. Whether your musical appetite skews along the lines of jazz, country, or good ole rock 'n' roll, you can find a property that combines comfort with creativity. Many highlight music memorabilia in the common areas and guest rooms, others offer fun features such as in-room record players, music lending libraries, and even a community radio station broadcast from the lobby. From coast to coast, each of these hotels has something special to offer any music lover.

For anyone who's creatively inclined, a stay at Hotel Max, located six blocks from Pike Place Market in downtown Seattle, will really strike a chord. The first thing you see upon walking into the lobby is a signed bass guitar, the prototype of the one designed by Nirvana’s Krist Novoselic. On the fifth floor, the hotel partnered with Seattle’s most influential indie label, Sub Pop Records, to design 19 guest rooms, each equipped with turntables and a selection of curated vinyl, courtesy of the record label. Images by photographer Charles Peterson, who documented Seattle’s music scene during the late '80s and '90s, adorn rooms and hallways on this floor. But guests throughout the property can get a taste of Seattle’s grunge attitude with the hotel’s cheeky hoodie-style bathrobes. 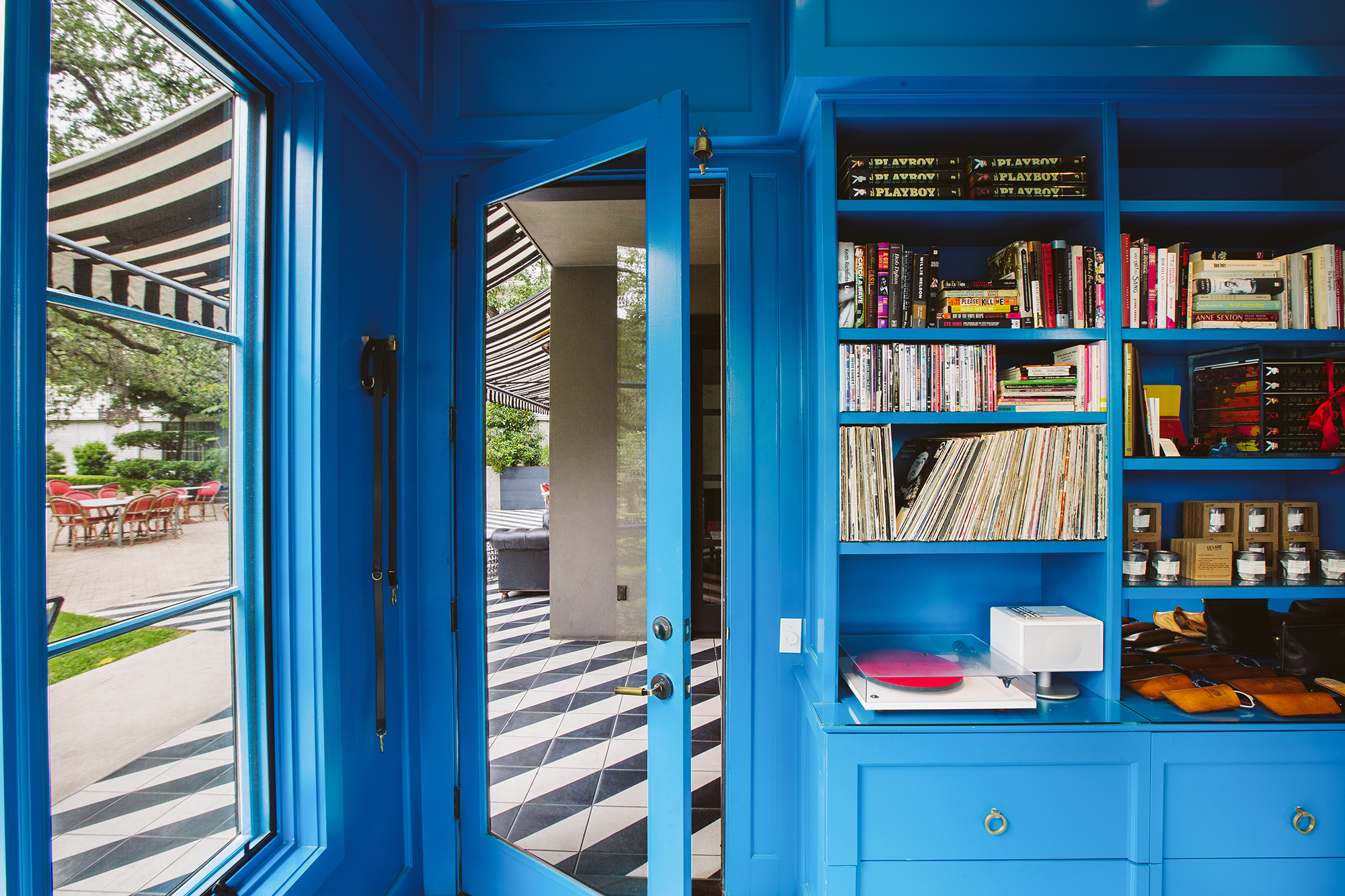 Named after the ancient Roman patron saint of musicians, Hotel Saint Cecilia draws inspiration from 1960s- and 1970s-era musicians and writers. It’s also a favorite spot for musicians to stay—the Foo Fighters recorded here and even named an album after the property. Each of the 14 rooms and suites are dedicated to a famous musician or artist, and guests are invited to borrow from the hotel's lending library of vintage LPs to play on the turntables in their room. Book lovers, meanwhile, can indulge in the collection of rock biographies and poetry anthologies. And for musicians, there's a concierge program that includes guitar loans in partnership with Gibson and private vintage-vinyl shopping services, courtesy of local music store Breakaway Records. 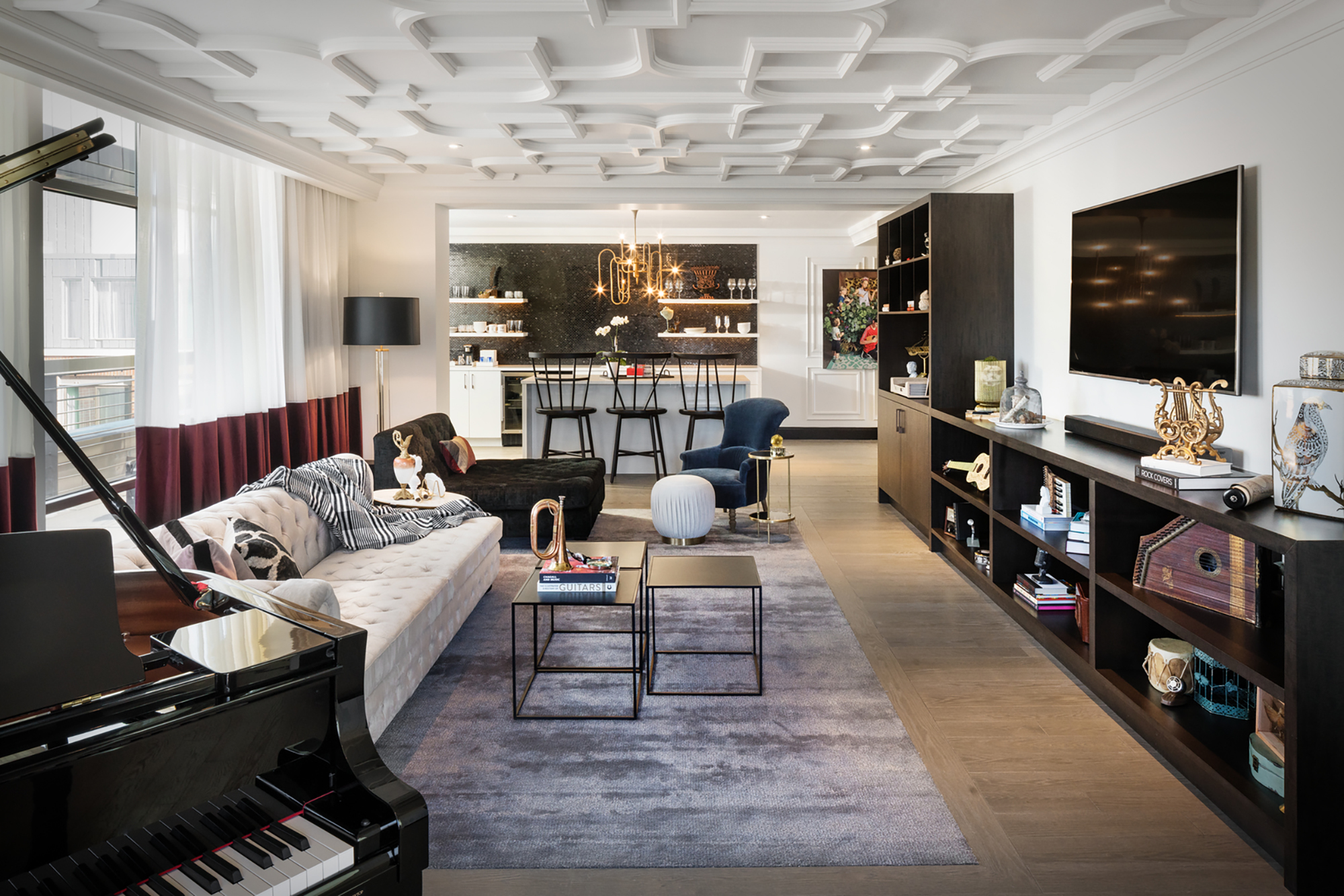 From the artwork to the amenities, the Elizabeth Hotel incorporates a musical touch into seemingly everything. The hotel's lending library is stocked primarily with stringed instruments, but keyboards, amps, and accessories are also available for in-room jam sessions. Or borrow vinyl from the house collection of hundreds of records and create a personal soundtrack for your stay. For those seeking a more impressive experience, stay in the Music Suite, which features a classic baby grand piano as the centerpiece of a room decked out with music-themed art and decor.

The Evelyn Hotel in New York’s NoMad neighborhood dates back to 1905, when it first opened as Hotel Broztell. It’s since been re-christened in honor of Evelyn Nesbit, the famed 20th-century actress and model, and her influence can be found throughout the property. The hotel’s 159 Art Nouveau-influenced guest rooms pay homage to the style of the Jazz Age heyday with nods to nearby Tin Pan Alley, the once-scrappy street that inspired early jazz musicians' snappy sound. Signs of the hotel’s musical past are subtle but stylish—you’ll find touches like gramophones that connect to your smartphone, chandeliers mimicking the shape of a trombone, and music notes gracing bathroom tiles. 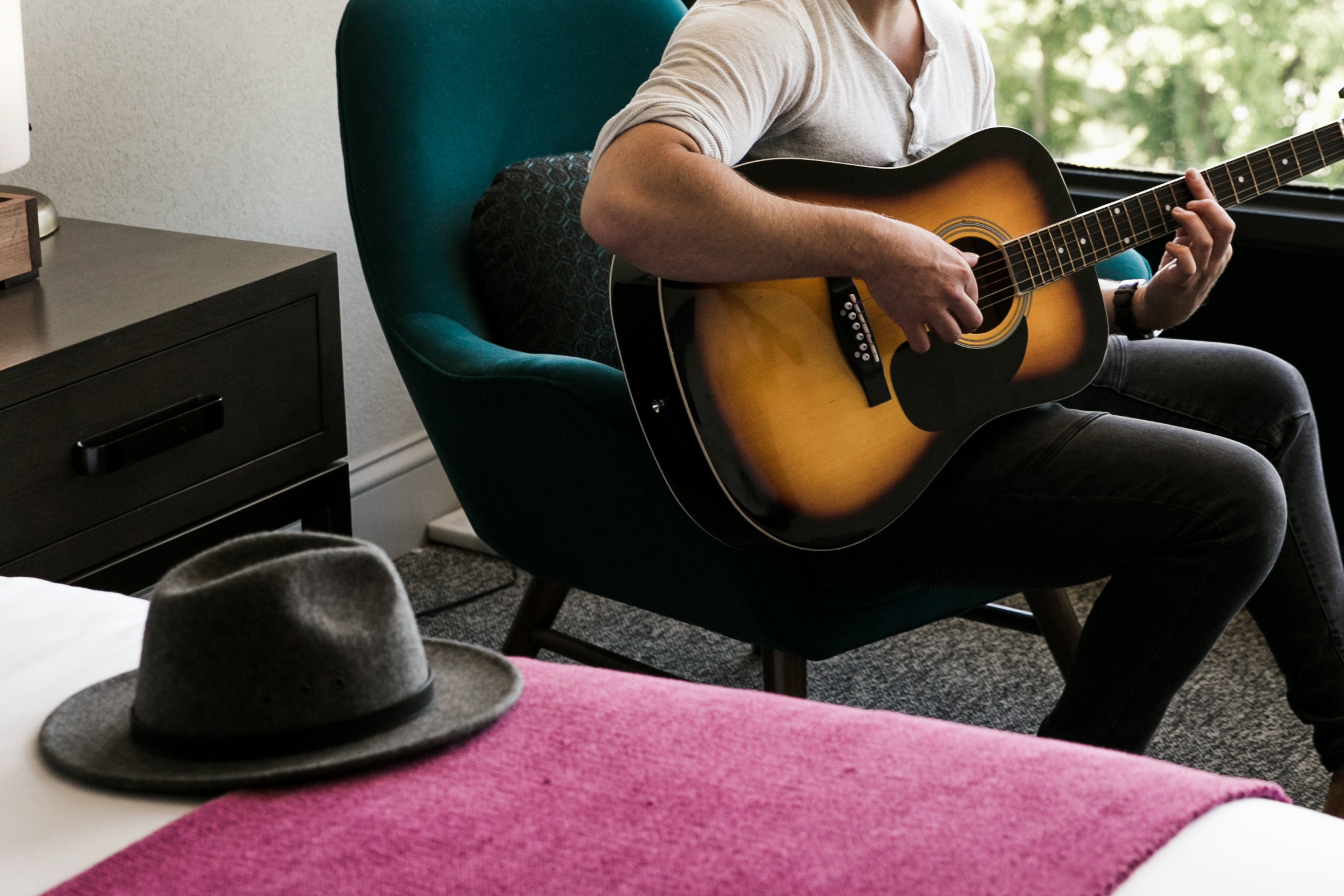 When the Hotel Preston was renovated in October 2018, it was imbued with a free-spirited vibe that’s evident everywhere you turn. You’re in Music City, after all, so it should come as little surprise that you can call down to the front desk and have an acoustic guitar delivered to your room free of charge, along with a signature guitar pick as a souvenir. Featuring 196 guest rooms that channel the creativity of the city, the decor reflects the vibrancy of Nashville’s music scene. (See: neon signage that urges guests to "Hustle, Be Happy, and Shine On.") The hotel is also close to many of the city’s noted sites, like the Music City Walk of Fame.

Fun is the Moxy Hotel’s stock in trade, and that’s evident from the moment you arrive. But first, you have to find the check-in desk, which is cleverly combined with the lobby’s centerpiece, a fully stocked bar. In the evenings, this is the place to be, as a DJ spins dance hits while guests play a variety of arcade and board games, including a giant Jenga. There’s even a secret speakeasy hidden somewhere in the hotel. (Hint: you’ll need a password to gain entry.) The hotel is paces from the Gaslamp Quarter, where you’ll find several popular music venues, such as the House of Blues and Tin Roof.

The Verb Hotel is within walking distance to Boston’s centrally located Fenway Park, which makes it a great home base for tourists. (Just be sure to check the Red Sox schedule if you want to avoid the game-going crowds.) With rock ’n’ roll memorabilia like photos, instruments, and framed concert tickets scattered throughout the common spaces, the hotel feels like a temple to the city's music history. Record players and a small vinyl collection can be found in every room, and you can browse the record library, which is well-stocked with albums from local bands. The property, originally built as a Howard Johnson’s motor inn in 1959, was shuttered for many years before its refurbishment in 2014, a revamp that maintained its retro appeal.

Housed in a former neoclassical church in the eclectic Adams Morgan neighborhood, Line DC is home to Full Service Radio, a community station that broadcasts out of the lobby and live-streams to each room. The station spotlights live performances by DJs and interviews with local musicians. Line’s 220 guest rooms incorporate an urban-chic aesthetic, with artwork and photography from local female artists. The hotel also features a satellite location for D.C.'s public library, stocked with books for young adults and children that can be checked out during a stay.