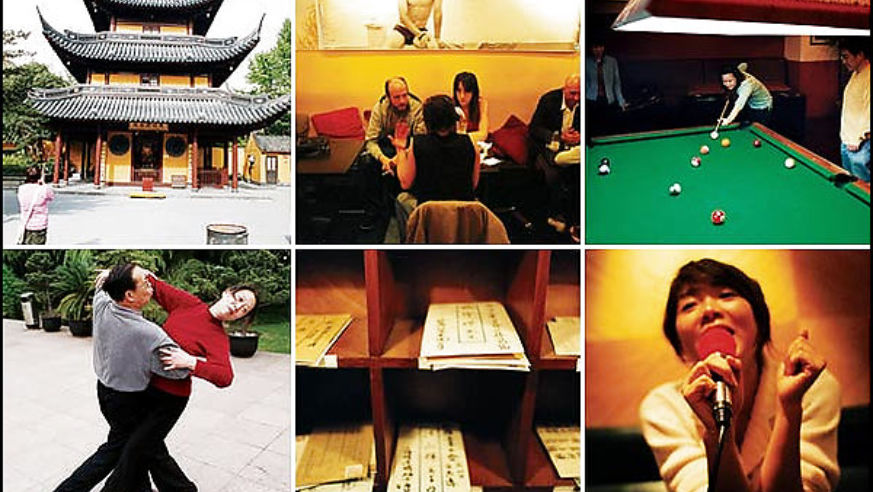 Four years ago, Dan Washburn dropped everything, moving from suburban Georgia to China's most dynamic city. As the editor of Shanghaiist.com, he's since learned far more about Shanghai than we ever could hope to, so we've invited him to tell us the best places to eat, shop, and play

One of my favorite things to do is wander. If you see an interesting alleyway (the older and smaller, the better), explore it; Shanghai is one of the safest big cities in the world. But go sooner rather than later. Old Shanghai, sadly, is disappearing at an alarming rate.

I rarely wake up as early as most Shanghainese do; but on those odd occasions, usually thanks to jet lag, I people-watch at Fuxing Park, an old French park in Luwan. Tai chi, fishing, ballroom dancing--it's got it all. It also has a granite statue of Marx and Engels, and late at night it becomes a hot spot for those heading to the two dance clubs located inside the park.

Nearby is a branch of the popular karaoke club Party World, also known as Cash Box. The Chinese love to sing, and karaoke is something that every visitor should experience (not to be confused with KTV, another type of singing establishment that has become synonymous with hookers). Party World is all private rooms that are booked in advance.

If you prefer to have other people perform, go to the 76-year-old Shanghai Concert Hall, south of People's Square. Three years ago, the gorgeous hall was lifted--all 5,650 tons of it--and moved 77 yards, where it's now the centerpiece of a park.

The jazz scene has enjoyed a renaissance of late, and the genre is easily the most reliable source of quality live music in the city. Some say JZ Club, in Xuhui, is Shanghai's best live music venue, period. I like the sexy laid-back feel of Number Five, in the basement of one of the neoclassical beauties on the Bund, Shanghai's majestic waterfront.

For sports fans, the best game in town is soccer, even if the Chinese pro league is rife with scandal and corruption. Shanghai Shenhua matches, in Hongkou Stadium, can be electric. The season runs March to November, and tickets from the window or a scalper shouldn't cost more than $6.

I'm not much of a museum person. I have, however, made a few trips to the Shanghai Urban Planning Center, inside People's Square. A scale model of what city planners envision Shanghai will look like in 2010, when the World Expo comes to town, takes up an entire level of the museum.

Further inland along Suzhou Creek sits 50 Moganshan Lu, a maze of converted warehouses and factories in Putuo District that now house the soul of Shanghai's contemporary art scene. It's easy to spend an afternoon at the dozens of galleries and artist studios. A similarly hip, though more commercial, vibe can be found at 210 Taikang Lu, an old neighborhood where many artists and designers have set up shop in renovated brick lane homes.

Chinese hipsters take their laptops to Xinle Lu's Boonna Cafe . For colder beverages of the alcoholic variety, I suggest Cotton's, a bar and restaurant in a stately 1930s home that is said to have been the residence of Shanghai's first mayor. In warm weather, drink in the large tree-shaded garden.

The city's most prominent places of worship are tied to Western religions, but if you have your heart set on visiting a Buddhist temple, Xuhui's Longhua Temple, Shanghai's largest and most active Buddhist center, will satisfy your needs. A seven-story wooden pagoda built more than 1,000 years ago is the signature structure. The Longhua Martyrs' Memorial, nearby, is an interesting slice of military history; it includes the original prisoners' barracks and tunnels.

Now for another activity that should probably include a little prayer: riding a bike. Some folks believe you can't truly do the city until you've pedaled among the masses. I'm not one of those people. But if you are, Cycle China organizes group and individual tours.

That, logically, brings me to my final tip. You can find great Chinese massages in Shanghai for around $5 per 45 minutes. Double Rainbow, where many of the professionally trained therapists happen to be blind, is reliable. Chinese massages can be intense, however, and afterward I often feel like . . . well, like I need a massage. So lately I've been splurging (about $25) for gentler hour-long oil massages. Dragonfly Therapeutic Retreat offers a tranquil setting for this heavenly experience.

Stay away from the "massage parlors" with the pink lights and girls in knee-high boots. They're brothels. Capitalism is alive and well in Communist China.

My first few years were pretty lean as far as live music goes. I like indie rock, while Shanghai preferred Filipino bar bands and "world-ranked" DJs. But a year ago, almost overnight, rock music arrived. Lately, two of the more reliable underground rock options have been Live Bar and Shuffle Bar. Live Bar, 20 minutes from downtown, is raw and divey. You can get a tall bottle of Tsingtao for less than $2, and you'll be sitting on plastic furniture (721 Kunming Lu, by Tongbei Lu, 011-86/21-2833-6764). Shuffle Bar has a slightly more refined warehouse feel. Prices are a little higher, but at least your feet don't stick to the floor (137 Xingfu Lu, by Fahuazhen Lu, 011-86/21-6283-2769, shufflebar.com). For current concert listings, visit Shanghaistreets.net or, of course, Shanghaiist.com.