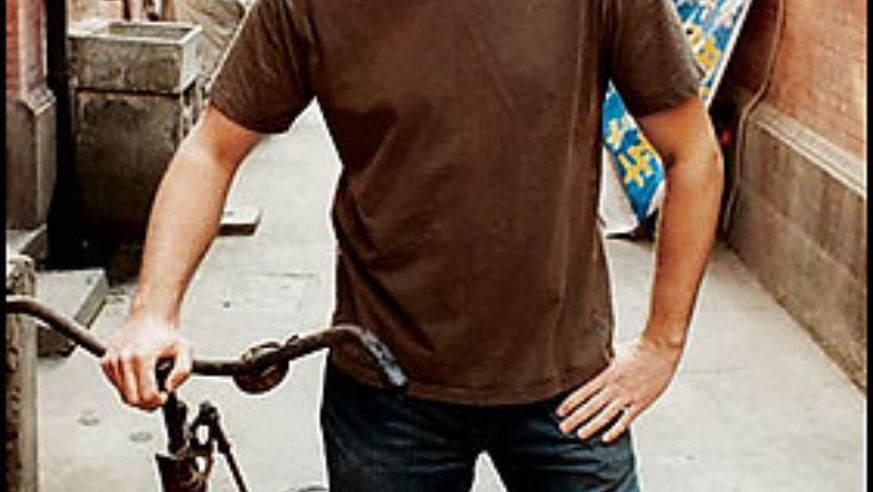 Dan Washburn in his neighborhood, Hua Ye Xiao Qu. Dan will answer questions about Shanghai on Tuesday, July 11, at BudgetTravelOnline.com

Four years ago, Dan Washburn dropped everything, moving from suburban Georgia to China's most dynamic city. As the editor of Shanghaiist.com, he's since learned far more about Shanghai than we ever could hope to, so we've invited him to tell us the best places to eat, shop, and play.

I arrived in Shanghai by accident, really. I had a decent gig at a small newspaper outside Atlanta--they paid me to try a new activity each week (bull riding, skydiving, nude water volleyball . . . ) and write about my experiences. Not bad. Of course, I also had to cover high school tennis, but there are always tradeoffs in life. Nearly four years into my Georgia stay, with another high school sports season on the horizon, I suddenly decided I needed to make a change. I didn't know what, and I didn't know where. I just knew I wanted something . . . different.

An e-mail here, a contact there, and faster than you can say "career suicide," I had signed a one-year contract to teach English at a place called Shanghai University. Different, indeed.

Four years later, my teaching days far behind me, I'm still in Shanghai. And I have no plans to leave.

Western journalists have taken to calling Shanghai "the most exciting city on Earth," and while I generally think anyone who writes such hyperbolic swill should be fired on the spot, it's true that Shanghai is certainly never boring. The city is constantly changing, always reinventing itself. The relentless pace of the place is addictive. I have fallen in love with Shanghai (and no, that's not hyperbole).

I had a personal website before I moved to Shanghai, so I kept it going once I got here. Hard to believe now, but back in 2002, there was a dearth online of English-language information about the city. My blog, Shanghaidiaries.com, quickly attracted a dedicated readership. Last summer, I launched Shanghaiist.com, a blog that has since become one of the most popular English-language websites about Shanghai.

It's kind of funny: Four years ago I was the guy asking all the questions, and now I'm the one other people look to for answers. I receive e-mail after e-mail from people the world over wanting to know about Shanghai, Shanghai, Shanghai. I respond to most of them, too. Think of the following 3,000 words as a giant mass e-mail about the city that I happily call home.

You probably aren't visiting Shanghai for its hamburgers--which are getting a lot better, by the way--so I'm focusing on Chinese restaurants. Whittling my list down was no easy task; Shanghai is a great city for anyone who loves to eat.

Shanghainese cuisine gets a bad rap: too oily, some say, or too sweet. But when prepared correctly, it can be delicious. (You'll hear that word a lot: It's one of the first English words students here learn.)

On a small, dark street in Luwan District, Chun ("Spring" in Chinese) serves the best home-style Shanghainese food in town. Reservations are essential, as Chun has just four tables. Simply ask the owner what she recommends. If you don't speak Chinese, have your hotel concierge write "please feed us well" on a piece of paper. You'll be taken care of.

There are a dozen more tables and an English menu at Jesse in Xuhui District, but you still need reservations. The braised pork is, well, delicious.

If you're out late, hope for a seat at Jing'an District's Bao Luo, a cavernous joint that stays open until 6 a.m. and often has lines out the door. I like the sauteed tofu and crabmeat.

Ye Olde Station Restaurant, in the heart of Xujiahui, is a little more upscale. Despite its name and the old train cars that double as dining rooms, it was never an old station. It was a French monastery, founded in 1921. (The equally regal St. Ignatius Cathedral is across the street.) Savor the tender Mandarin fish--a steamed river fish that the server will debone--then explore the grand building, which is the epitome of Old Shanghai.

You must try xiaolongbao, often called "soup dumplings." While the steamed delicacies--thin pastry skins filled with meat and scaldingly hot soup (be careful!)--can be found on many a corner, ordering them in English will get you nowhere. The easy solution is tourist-friendly Nanxiang Mantou Dian, in the kitsch capital of Old City, Yu Yuan. Nanxiang is famous, and recognizable by the long take-out line (pay more to get a seat upstairs). Gourmands grumble about a decline in quality at Nanxiang, preferring the Taiwanese chain Din Tai Fung in Luwan's Xintiandi development, despite a sterile atmosphere and higher prices.

The xiaolongbao's fried cousin is shengjian mantou, which is worth the wait at Yang's Fry-Dumpling . While we're on the subject of dumplings, I could live on jiaozi, minced meat and/or veggies in ravioli-esque skins. They're boiled, steamed, or fried and served with an addictive soy-vinegar sauce. Da Qing Hua is a chain--I go to the one in Jing'an--but it has a wonderful selection of jiaozi and other hearty specialties from the northeast. Don't miss the bizarre "penis shrine" in the men's room.

Spice things up even more at Shu Di La Zi Yu Guan, a multistory Sichuan joint in northern Xuhui that specializes in la zi yu, a vat of tongue-numbing, flaky fish drowned in an oily broth and red chili peppers. (The huge bullfrogs you see in tanks just inside the entrance? They cook up quite nicely.) Slightly more sophisticated, Guyi, a Hunan restaurant in Jing'an, can make you breathe fire. I've enjoyed everything I've had there, especially the pork ribs with cumin.

Personally, I had always identified with that line from Lost in Translation: "What kind of restaurant makes you cook your own food?" Oddly named Dolar Shop, however, recently converted me to hot pot. You sit before an individual pot bubbling with broth. Toss in meats and vegetables, wait a couple minutes, and enjoy. Nice view, too.

Speaking of fun, Afanti serves Xinjiang food, which is more Middle East than Far East, in a raucous atmosphere well worth the 25-minute cab ride to Hongkou District. Stuff yourself with roast mutton and Xinjiang Black Beer, and enjoy the belly dancers. I've been to Xinjiang, in the west, and Afanti rings true, down to the clientele.

After Afanti, a time-out from meat will be in order. My fiancee, a vegetarian, thinks Vegetarian Lifestyle is the best place in town. Drinks include a variety of juices and teas, but no alcohol, and it's one of the only nonsmoking establishments in China.

Dim sum is a breakfast and lunch tradition here, so get to Xintiandi's Crystal Jade early. I'm a big fan of the Sichuan dan dan noodles--so what if they're not technically dim sum--in peanut broth.

In Xuhui, Taiwanese restaurant Charmant (I don't understand the name, either) has an equally expansive menu, with creative desserts. Just don't try to drink the "smoothies"; you need a spoon.

The restaurant I go to most often is Xing Xing, in the old Jing'an lane area I call home. Everything is fresh, and I love the huntun soup (akin to wonton soup, but a whole lot better). Poke around the Hua Ye Xiao Qu neighborhood: If you see a tall white guy walking a cute dog, say hello.

Assuming you won't want Chinese food for every meal, let me suggest a hip new place, serving Western fare, that may not have found its way into your guidebook. A Future Perfect, in the beautifully renovated first floor of an old Shanghai lane house, is a cozy--verging on cramped--cafe, restaurant, and bar that serves up equal parts style and substance. Five of us ate there recently--appetizers, entrees, desserts, and drinks--and the bill was $120 (No. 16, Lane 351 Huashan Lu, near Changshu Lu, 011-86/21-6248-8020). A Future Perfect also boasts one of the nicest outdoor dining areas in Shanghai. The restaurant shares the 1930s brick house with the Old House Inn, one of the city's only boutique hotels. The 12 charmingly decorated rooms range in price from $65 to $130 (011-86/21-6248-6118, oldhouse.cn).