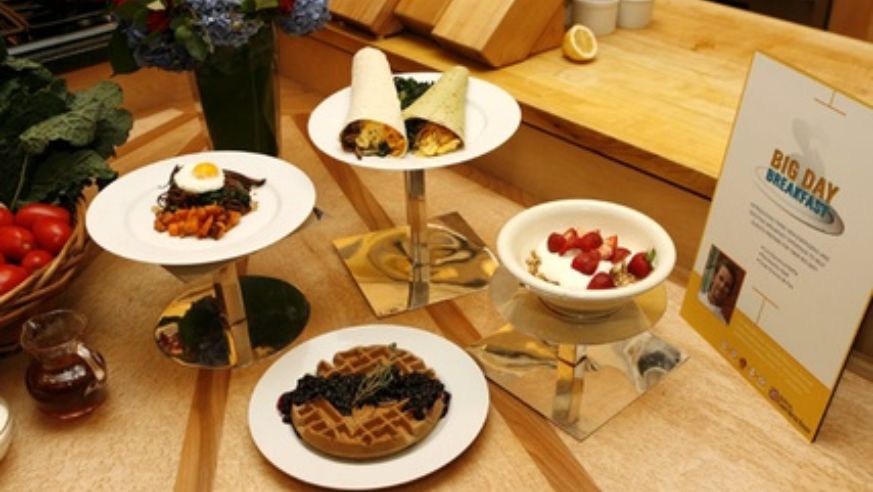 The national chain has teamed up with Chris Jacobson, a chef who competed on season three of the Bravo TV show Top Chef, to create three new breakfast dishes for the chain's nearly 400 hotels.

The upside of having a celebrity chef is obvious: Top Chef is a popular show, and Jacobson is a personable former pro athlete who will be an asset in the chain's Big Day ad campaign.

The potential downside is that bringing in a celebrity chef might seem like just a gimmick, especially when he's designing just a few dishes rather than overhauling the entire menu.

The proof of the pudding, as they say, is in the eating. There's a waffle with blueberry thyme compote and granola with flax seed, lemony yogurt, and strawberries, and both dishes are good.

The most interesting option is a poached egg served on shredded brisket and kale. (Vegetarians can replace the brisket with tofu.) It's a healthy take on hash, but more importantly (to me, anyway) it tastes good. Jim Cone, vice president of marketing for HGI, says that individual hotels may use premade brisket instead of making it themselves from scratch, but he also says he tasted Jacobson’s dish with premade brisket in Dallas recently and thought it was very similar to the dish Jacobson made himself.

According to Cone, a couple of substitutions may be made by individual hotels (these depend on the ingredients they can get from local suppliers): Spinach may substituted for kale in the hash (Jacobson and Cone each pointed out that both kale and spinach are so-called super foods, very rich in nutrients), and plain yogurt may be substituted for the Greek yogurt Jacobson uses. The taste is similar, but Greek yogurt has a thicker, creamier consistency.