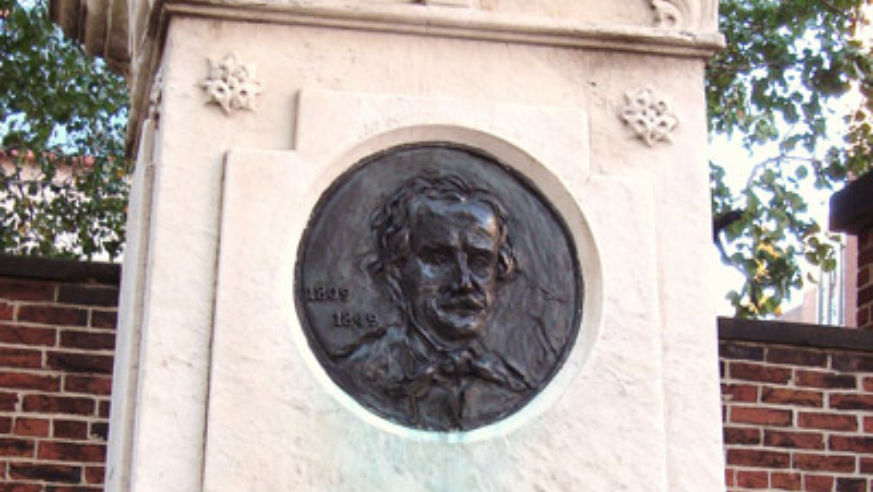 Courtesy VisitMyBaltimore
The Edgar Allan Poe monument is at the entrance of Westminster Hall and Burying Ground, where the all-night vigil will be held Thursday

Even though multiple cities have been duking it out for years over who lays more claim to Edgar Allan Poe—the great American writer lived in six states up and down the East Coast—Baltimore holds the distinction of housing his earthly remains.

This week, two hundred years after his birth, Poe will be given a proper funeral that was denied him so many years ago, in the city that holds their famous resident so dear that they've even named their NFL team—the Baltimore Ravens—after one of his famous poems.

To kick things off today (Oct. 7), there is an "open-casket viewing" at Poe's former home at 203 N. Amity St. from noon until 11 p.m. It is believed that Poe wrote over a dozen poems and prose while living in this home with his paternal grandmother, his aunt Maria Clemm, and his cousin Virginia—whom would later become his wife. ($5)

Continuing the tribute on Thursday, Oct. 8th, an all-night candlelight vigil will be held from midnight until 7 a.m. at Poe's monument at the entrance of Westminster Hall and Burying Ground. This will be an opportunity for the public to honor the writer with personal toasts, poems, and music, along with scheduled theatrical performances in an attempt to bring Poe's tales to life. (Free)

There are many more themed exhibits and activities planned for the funeral and throughout the year, including some spooky walking tours.

The grand finale of the largest Poe bicentennial event in the country will be held on Sunday, October 11th. Starting at 11:30 a.m., a fife and drum marching band and police escort will lead an antique horse-drawn hearse carrying Poe's casket from his Amity Street home to his final resting place at Westminster Hall for burial.

The Addams Family actor and fellow Baltimorean John Astin will officiate over the two services at 12:30 p.m. and 4:30 p.m., including speakers in the likeness of Sir Arthur Conan Doyle (who penned the Sherlock Holmes series), and the filmmaker and producer Sir Alfred Joseph Hitchcock. (Procession free, funeral $35 in advance, $40 at the door)

In grim Poe-like fashion, there's still debate over what caused his death at age 40. Initially believed to be drunk, the writer was held at Church Hospital where he emitted morbid outbursts leading up to his death on October 7th, 1849. Upon later examination, it was determined that he had more likely been robbed and beaten instead.