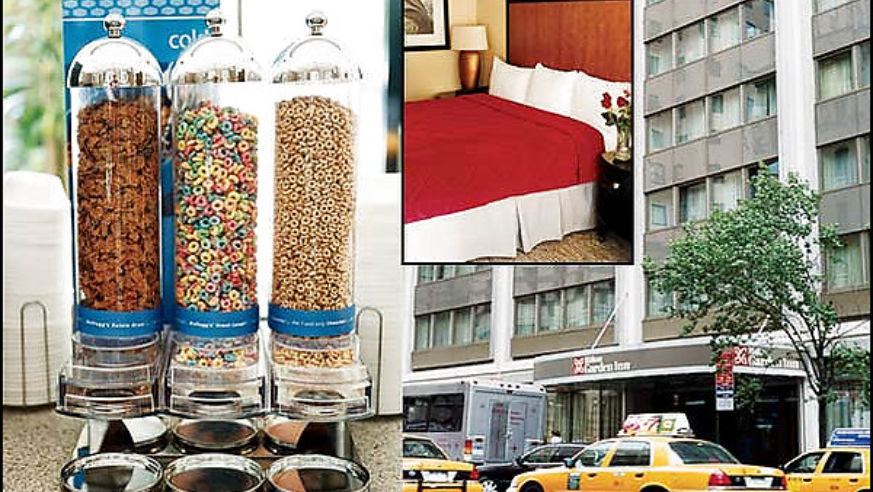 Midmarket brands are opening sleek hotels all across Manhattan, delivering a quality of life most new arrivals take years to achieve

Choosing a hotel in New York City has long meant deciding between two less-than-winning options: splurging beyond your financial comfort zone, or resigning yourself to what could be a fleabag. Not anymore--and the middle ground is far more stylish than you might expect.

Name a national hotel chain in America, and chances are good it's making inroads in Manhattan. Over 1,500 midpriced rooms will open in New York City this year: Among the new entries are Holiday Inn Express, Hilton Garden Inn, Courtyard by Marriott, Hampton Inn, Comfort Inn, and Four Points by Sheraton. "All of these companies have wanted to be in New York for a long time, but they weren't able to do a deal," says John Fox, a senior vice president at PKF Consulting, a firm that advises hotel operators on expansion plans. "Now they're all coming at the same time."

One factor making the boom possible is that chains are exploring areas outside pricey Times Square and paring back features like in-house restaurants. This is a bonus for guests who'd rather be based in neighborhoods where locals actually live. (And who needs a hotel restaurant when you're in Manhattan?) One of the first to inject some style into the midrange in Manhattan was Embassy Suites, which reopened its World Financial Center location after an extensive renovation in 2002. A soaring 15-story atrium--with a massive mural by Sol LeWitt--lends theatricality to the lobby, and all of the suites have microwaves and 250-thread-count cotton sheets.

This year, however, finds many more brands coming to town. With any hotel, particularly affordable ones, new construction is always a serious plus. Hampton Inn recently debuted a hotel downtown, at the South Street Seaport. (The departure of the Fulton Fish Market is leading to a quick gentrification of the area.) A Courtyard by Marriott opens on the Upper East Side in July, and the company also has plans for a Harlem property. Later this year, Hilton Garden Inn will unveil a property in Tribeca. "New York is the hottest market in the U.S.," says John Wolf, Marriott's senior director of media relations.

The new hotels are borrowing from the boutique-hotel aesthetic, a Restoration Hardware take on minimalism that costs less to refurbish than more intricate styles. "Going into New York, we needed to be more New Yorkish," says Mark Nogal, vice president for marketing and sales at Hilton Garden Inn. The year-old Times Square property has black-and-white photographs of Manhattan and a mod color scheme. The Four Points Sheraton in Chelsea, which opened two years ago, is painted in bold reds and blues and decorated with slipper chairs.

The similarities to boutique hotels stop, however, when it comes to rates, which are as much as 30 percent lower than the Manhattan average of $275 a night. Most of the new hotels charge between $185 and $220. While that's higher than their national averages (Holiday Inn Express, for instance, charges $189 in New York City, compared to $89 elsewhere), it's a fair price in a city where hotel rates have never seemed reasonable.

What makes them especially fair is the impressive amenities. There's an industry trend at the midrange level to avoid nickel-and-diming guests. (Fancy hotels, meanwhile, still do it like crazy.) These hotels offer free Internet access and unlimited local calls and throw in a substantial breakfast. The properties that don't have exercise rooms provide discount rates to nearby gyms.

Moreover, one of the most appealing factors is that these are respected brands. In an intimidating city, it can be reassuring to count on the fact that your hotel is sure to meet certain high standards.